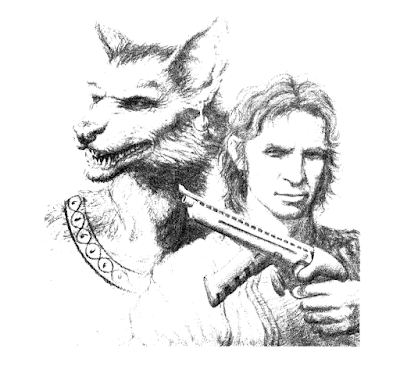 This post is about how my OD&D hack of Skyrealm of Jorune, Jorune: Evolutions, handles race and stats in character generation. But it's also about how race is understood on Jorune. There are five available player character races in Jorune: Evolutions. The first is human, the (more or less) unchanged descendents of the travelers. Second come two post-human races, the smaller, isho sensitive muadra, and the giant isho resistant boccord. Finally come the two iscin races of uplifted animals, bronth, humanoid bears, and woffen, humanoid wolves.

Race and Gender on Jorune


The culture of Burdoth is a strange mix of the old and the new. Many of the prejudices and systems of oppression of our social world are unknown in Burdoth, for the travelers had evolved beyond them and nothing has rekindled them. In a world where the salient division is between human, post-human, and alien, differences in human appearance (skin color) are barely worth remarking on, especially because they were no longer tied to systems of oppression in the society of the travelers. The term “race” is thus used in Burdoth to refer to different species or subspecies of sapient being. Humans are one race, the post-human muadra another, the post-human boccord a third, the Iscin races (uplifted animals) each it's own still different race, as are the sapient aliens of Jorune such as the huge and silent ramian, the insectoid cleash, or the shanthas of human legend.

By current earth standards there is also little gender oppression in Burdoth. Sexuality and gender is far more fluid and less punishing than on present day Earth. When they became hunter gatherers, the travelers carried this culture with them and hung on to it, transmitting these attitudes to the culture of present day Burdoth.

Humanity on Jorune is undergoing incredibly rapid changes. That so many of Jorune’s sapient species are human derived, either as iscin or post-human races, sometimes gives rise to unsettling fears about transformation, mutation, and the loss of identity. Especially to those who do not live alongside these other humanities, it can seem at times that the world holds up on all sides funhouse mirrors in which distorted human forms can be glimpsed. This inchoate fear is exacerbated by the fact that human parents can give birth to muadra and boccord children.

Humanity also lives uneasily with isho, which seems at times like an invisible world from which they are shut out, a world that can lash out violently at any time, through aggravating isho storms, or the natural predators of Jorune with their isho senses and dyshas (psychic powers). This fear of an invisible world is the basis of the common superstitions about muadra. The small size of muadra would (and often does) mark them as easy targets for bullying--where fear of their power does not deter. In more cosmopolitan settings, this fear takes a controlled political form, involving regulation and surveillance by the diajic (diaji eaters, isho police). Muadra resistance has taken political forms in Burdoth as well.

The giant boccord have integrated better, and although subject to prejudice, suffer less from raw fear and hatred. Their large size makes them valued laborers in the villages and intimidating targets for violence. For reasons of mutual aid, boccord are often clannish, and have developed extended familial networks for sel-protection. In Ardoth, they flourish in several trades and industry.


The iscin races, where they have established communities of their own, as in the woffen realm Lundire or Anasan, and the bronth realm Doben-Al, have rich and complex cultures with their own distinctive qualities and conflicting strands. But the following generalizations are fair if incredibly simplified. In bronth culture, there are strong threads of stoicism that are often connected with religious ideas, fed by the complexities of suppressing bestial impulses. Woffen culture, by contrast, is suffused with a complicated pack mentality that involves a (non-gendered) hierarchy, but one that is always contested and shifting within the group. Woffen culture tends to be more playful and forgiving than bronth culture, and more about social navigation than self-control.

In Burdoth, where this game is set, iscin cultures are creole cultures. Iscin race PCs are likely to have been raised in human society, and have had to negotiate the issue of belonging and difference, with an interplay between counter-culture and assimilation to majority human institutions. Since your PC is entering tothis, this situation is especially complicated, since others of your kind are likely to view you as having cast your lot with human power structures. But remember, above all, that bronth and woffen are individuals, whose inheritance from humanity, which is after all their template and the source of their formidable sapience, entails all the variation and nuance that one finds among human beings.

For stats, roll the number of dice indicated for your selected race. Jorune: Evolutions uses the small starting modifier range of Original Dungeons & Dragons: -2 to +2. But unlike in OD&D, numerical stats play no role in this game. You need only record the modifier using the chart below, which influences stat checks, reaction rolls, combat rolls, and downtime actions. (I will discuss the system of stat checks and skill rolls in another post.)

Note too that unlike in OD&D stat modifiers can be changed through gameplay, although not by acquiring levels, since Jorune: Evolutions does not use experience points or levels. Instead players may train a given stat as a downtime action by setting a tracker. They may increase each stat modifier once using multiple downtime activities up to a maximum of +2. It is also possible to increase each stat modifier once up to a maximum of +3 through sandbox play, by undergoing certain experiences or performing remarkable feats on the hexmap. (I call this "sandbox advancement". More on the details of advancement another time.)

Given the limited modifier range, and the possibility of change through play, your starting stats are likely to be less important in Jorune: Evolutions than in other system of D&D from AD&D 1E forward.

There are seven stats in Jorune: Evolutions

EDIT: Gus L. made the case in the comments that the range of -2 to +2 (or even +3!) is too large for OD&D. Despite his great experience running OD&D, I tried to resist by emphasizing that it didn't seem that bad in combat. But I crunched the numbers on my system of skill and stat checks, and it turns out he was right. So here is what I'll be using in Jorune: Evolutions instead:


This modifier will still be possible to raise through play, but only once, and only through "sandbox advancement". The max possible modifier for a PC will be +2.

In making the choice of your character’s race, there is a dynamic similar to level limits for demi-humans in early editions of D&D. Bronth, woffen, boccord, and muadra, begin with advantages unavailable to humans. But the use of Earth-Tec is closed to all non-humans. While as a member of an iscin or post-human race you will have your own story to tell no less than human characters, it is likely that over time your advantages will be eclipsed by those of your human companions as the group comes into contact with the remnants left by the travelers. If you choose to play a nonhuman race, be aware that this is the choice you are making.


Your character is a human being, an unchanged descendant of the travelers. All skin colors and physiques found on present day earth are found on Burdoth, so you may decide how your character looks. Humans are the only race able to use Earth-Tec, the original ancient technology of the travelers. You are also the only race who has dreamt of the egg. In Burdoth, your race is politically ascendent.


You are a post-human species that looks human, but has developed a large form (8’-9’), and a resistance to Isho. You may choose the details of your appearance, apart from your larger size, just as a human would. In addition to your large size, you are the only race able to use anti-dyshas, mutations that developed to shield you from isho. You may not learn dyshas.

Large: +1 melee damage against normal creatures, +2 against small creatures. You can carry more than a human, but weapons, armor, and equipment are 2x as expensive for you. (Note that since all weapons do 1d6 and strength does not modify damage, large size is a significant advantage.)
Anti-Dyshas: You may never learn dyshas. You are the only race that may spend skill points to learn anti-dyshas.


You are a post-human species that looks human, but has developed a small form (3’-4’), and a greater sensitivity to, and ability with, isho. You may choose the details of your appearance, apart from your larger size, just as a human would.You may choose one free dysha.

You are an iscin race, an uplifted bear. You look like an erect fur-covered humanoid with a bear-like head, and clawed hands with opposable thumbs. You are slightly larger than a human (6’-7’). You have great strength, and are able to use your natural claws and bite as normal weapons. You also may draw upon a bestial rage to wreck great havoc, but at a cost to your humanity.


Natural Weapons: In melee combat, you are always armed. Natural weapons can be used in grappling as close weapons.
Bestial Rage: You may opt to release the beast within, entering into a bestial rage. This lasts for up to 3 turns. During this time take an extra melee attack and take advantage on damage rolls with natural weapons. At the end of your bestial rage, test against learning (6-) reduce your learning modifier by 1 permanently (7-9) take one permanent bestial feature (e.g. eats like a real bear or growls when irritated) (10+) no effect. If you fall below -2 learning modifier as a result of a failed check, you have squandered your hard-won humanity and are now one of the lost. You cease being a player character.


You are an iscin race, an uplifted wolf. You look like an erect fur-covered humanoid with a wolf-like head, and hands with opposable thumbs. You are slightly shorter than a human (4’-5’). You have great agility and are able to use your natural fangs as normal weapons. Your senses are powerful, allowing you track well and perceive subtle differences others cannot.


Natural Weapons: In melee combat, you are always armed. When grappling, you may use your bite as a close weapon.
Heightened Senses: In moonlight or dim light (but not total darkness) you see as though a lantern was lit. Add +1 to hear noises check. Add +2 to tracking rolls where a scent is fresh, and +1 where a scent is fading. Since there is no darkvision without the use of dyshas, heightened senses are a significant advantage.


Now that you have selected your character's race and rolled your stats, it is time to choose a name. Names on Jorune follow two patterns. One influence is John Carter of Mars, Barsoom-style names. These are names that sound like this: Barsoom, Deja Thoris, Thuvia, Llana of Gathol, and Tars Tharkis. Examples of proper nouns from Jorune that follow the Barsoom pattern might include Jorune, Drenn, Kesht, Khodre Dhardrenn, Dharsage, and Tarsory.

Bronth and Woffen born in Burdoth usually go by names that follow this pattern as well, although they will also have names in their respective iscin creoles.

In the next couple of posts I'll talk about making your home village, selecting starting skills and proficiencies, and using dyshas.