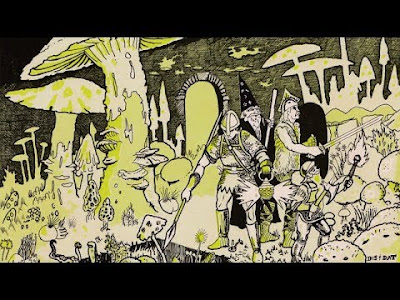 I had a new insight about one of my favorite topics, worldbuilding for open-world, sandbox games. Think of it as another tool in the toolkit.

I want to focus on the initial presentation of your very own evocative snowflake setting to players. Here's an idea. When we share a "setting" or "background" with our players in an open world sandbox, we should think of ourselves as sharing actionable intelligence. Rather than painting an ornamental backdrop for the real action, we should think of ourselves as placing pieces to be engaged with in yet to be determined ways on a game board. But how can we build and convey a setting through actionable intelligence?

Now, there's a school of thought that one used to hear much more retro-gaming circles, that we should worldbuild "from the bottom up". Don't start with an info dump, or a half-realized fanfic novel; instead start small with a little corner of the world. Give people just what they need to know to get playing--and no more. Build the rest organically from there. Sensible advice for someone who gets overwhelmed by prep, or those whose past experience consisted primarily of scripted adventure paths. Forget all that and plop down a hexmap, with a few jotted notes about a town, select adventure hooks, and one or two little dungeons. Then go wherever the adventure leads!

While this works, there is a cost to doing things this way. One cost is that it's much easier to imagine small scale things if one has a working sense of large scale things. I can improvise more easily if I know what "feels right" or is "plausible" given the general way I've been thinking about things. Without a bigger context, it's hard for me to imagine things on a small scale.

But a more important point is that one of the great pleasures of sandbox play comes from the slow-burning long game. One feature of the long game is that you need to have it in view from early on, ideally before the first session. I'm talking about the tantalizing horizon of possibilities that lies off in the distance, igniting desire and curiosity among the players, drawing them in. If all you know is that the town is called Hofberg and there's a dungeon filled with salt ghouls in a mine nearby, you just can't play this kind of long game.

What this slow-burning long game is like will depend on what kind of a game you're running. It will likely involve the relations and intrigues of various major factions. These are the things in the setting that most directly correspond to game pieces, with which players may choose to interact. But if your game is focused on exploration and discovery, as mine usually are, then the long game should also be, at least in part, about the exploration and discovery of the unknown. Now discoveries come in all sizes. The slow-burning long game is about the really big ones, the mind-blowing mysteries that are tied deeply with the setting and world, the learning of which has the potential to change everything.

To build this in from the start, when presenting your setting, instead of conveying facts, try leading with the unknown. Go with the questions rather than the answers, the big ones, the slow-burning mysteries. Nothing says "this is a sandbox of exploration and discovery" like introducing a setting by emphasizing what facts aren't known. (Aside: it's fun to hold some questions back too, because it's also a slow-burn pleasure to have the players stumble onto a big mystery that's been there all along after a long time playing in the sandbox.)


I just did this with the intro to my players guide to Jorune: Evolutions. In recasting the setting of Jorune, I found myself replacing the perfectly fine narrative sci-fi info dump in the original (2nd edition) books with conflicting stories and outright mysteries. In essence, instead of saying, "Human colonists came to Jorune on such and such a date for such and such reasons, and here's what happened...Then their ships were destroyed in such and such a war," I replaced this with conflicting oral histories and cycles of myth that essentially said, "Some stories say they came because of this, other stories say this other thing. Nobody knows what the hell happened to their Ship and Earth-Tec!" Given that the discovering Earth-Tec is a major thing in the game, this ties the questions about the past directly to the heart of the action. Similarly, when I introduced my own new trippy psychedelic element, "the dream of the egg", to the setting, what I introduced was a blatant enigma almost literally calling out to be solved.

One thing that's fun about questions is that you don't need to have your mind made up about the answer at the start. Perhaps you'll have some idea about some of the answers, but perhaps others wait on the setting taking more shape in your mind through play. That fits with the sensible "you don't need to have thought this out before sitting down to play" ethos without giving up on the big picture. (But, if you're like me, you'll have answers to some questions in mind from the get-go, because it's the answers that will have made the questions alluring to you in the first place.)

Another thing that's fun about questions is that factions and NPCs may have theories or think they know the answer. Allow theories to proliferate! Maybe everyone has a take. This is especially appropriate for a setting where baseless speculation, psychic visions, wooly tales, and "metaphysical" extrapolation of drugs experiences are bread and butter. But actually, I think it could work for any sandbox game where exploration and discovery are core activities and a lot actionable intelligence is unknown.

So, there's one more tool for your tool kit. When presenting your setting, lead with the mysteries and enigmas. Emphasize the questions without answers. In a game about exploration, knowing what you don't know is actionable intelligence.