I'm going to do my first Twitch stream! 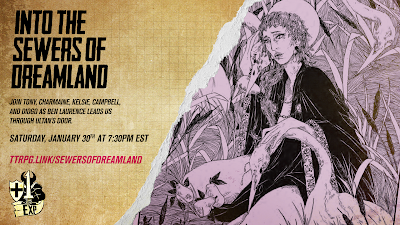 In a first ever for me, I'm going to be taking Plus One Exp's crew through Ultan's Door to the sewers of Zyan on this Saturday, 1/30, at 730pm EST. Get a sneak peak of what's between the covers of the forthcoming Issue 3! You can follow the stream here: ttrpg.link/sewersofdreamland.

Through Ultan's Door 3 is an open-ended pointcrawl, so I faced the problem of how to get the players quickly in into it for a one shot. I didn't want them coming through Ultan's Door, since that would put them straight into the Ruins of the Inquisitor's Theater from issue 1, and I wanted to preview newer material. While I can't quite spill the beans, here's the premise I came up with and emailed to the players:

Elspeth was your godmother. She was a colorful character, a known adventurer, and renowned duelist in her youth. When you were a child, she brought wondrous gifts from her travels--exquisite moving dolls, gorgeous and frightening masks, a set of paints in remarkable hues--that she claimed were from Wishery, a land "beyond the veil of sleep", about which she told you many tales. Your mother told you the stories were just fairy tales, but you like to imagine they were true. After a falling out with your family, you lost touch with her, and were sad to learn that she had died. Curiously, there was no funeral held for her. But a sealed letter did arrive for you, in her unmistakable script, with cryptic instructions. It says that if you are receiving this, it is because she has died, and she wants you to know that she is proud that you have made yourself an adventurer. Her last wish is that you are to gather a party of your companions, outfitted for an expedition, and to come as quickly as you can to her house in the countryside.

I'm nervous for sure, but I think it'll be a lot of fun. I'm excited to play with Diogo Nogueira, who is one of the players who will be stepping through Ultan's door with me. Come if you want to catch a glimpse of the new opium dreamer class, or if you're curious what a potion of penumbral transmigration does, or if you want to meet the sewer wyrm Cephaia, Prophetess of the Muddle Waters. Or if you just want to see my grinning mug DM a session in the dreamlands.

(Boring mandatory mention: if you want to follow the project and receive a notification when it launches, click here. Also, I now have a Facebook page for Through Ultan's Door Press that you can see here.)

This post is about the MAPS of Through Ultan's Door. It's a glimpse into some of the wonderful cartography in this upcoming trio of zines. It also tells you a little something about how I collaborate when things are going well.

The zine uses detachable covers with maps printed on the interior of sturdy cardstock covers that can stand up like little screens. Gus L has done all the cartography for the zine from the very beginning. His maps grace the interior cover of Through Ultan's Door 1 & 2. For issue 3, I sent Gus a pointcrawl map of the sewer river that just had a series of circles with words in them connected by a single line, along a capsule summary of each point. It was like a child's scrawl. Check out  this psychedelic, three-dimensional map, Gus came back with, which will be reproduced on the interior of the cover of Through Ultan's Door 3 Part I. 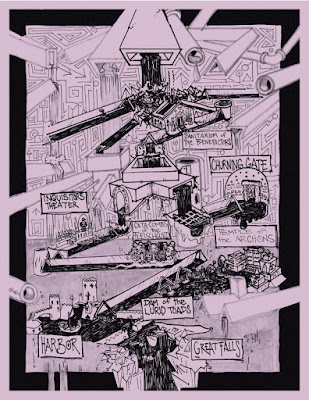 One thing Gus said when he sent the map is: "You're obviously going to need to write the harbor up as a bigger site." To which I replied, "Yes, I will."  Truth be told, in fact, it's in part by staring at this map and thinking how my text could live up to this cartography that we ended up having a double issue for Through Ultan's Door 3. I thought, "I have to do this map justice."

My collaboration with artists works that way too. Once I have a working relationship and trust with an artist, I say, "Here's the text I'm hoping you'll illustrate. Here are some visual references. But actually what I'm most interested in is how YOU will imagine it. I'll rewrite the text to match what you draw." Zyan, in its published form, is an aesthetic collaboration.

Next, take a look at Gus' delicious cartography for the wreck of the Verdant Purveyor, the base of operation for the Regulators of the Black Hand, dread sewer pirates led by Free Hand Hesock. It is reproduced on the interior of the cover of Gus' companion module Beneath the Moss Courts. He dreamed up the Verdant Purveyor and wrote the accompanying text, so this is all his vision. (Note: the area numbers haven't been added yet on this version of the map.) 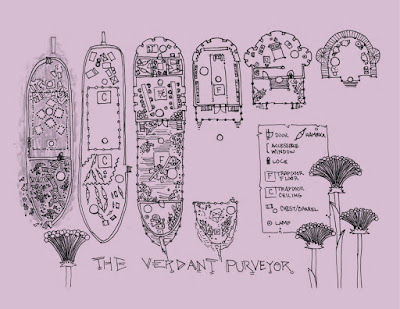 This map has none of the slickness of contemporary digital maps. It is not a battle map. Rather, it's intended as an aid to be used at the table (physical or virtual) in describing the rooms for play in the theater of mind. Look at how lovely the exploded design is, with each deck and their inter-relations so clearly illustrated, and so much visual information about the contents right on the map.

What is most striking though about Gus' maps is the way they bring alive and vividly evoke the sense of place. Note those decorative, weird, elegant sewer reeds reaching upwards, and the shattered, water-filled lower deck, or the weird repurposed rooms, like the one with a pentagram on the floor.  I have always thought that even without the keys, you could design great adventures just by staring at Gus' maps and letting your imagination roam guided by sense of place his maps conjure.

You can learn more here about what, besides these maps, will appear in double-issue 3 and Beneath the Moss Courts. A pre-launch page for Through Ultan's Door 3 is now up on Kickstarter. If you are interested in following along with the Kickstarter and getting an announcement when it launches on Monday February 2nd, please click on this link:

In closing, here is the cover of Beneath the Moss Courts. This illustration of the wreck of the Verdant Purveyor is by Huargo. Obviously. 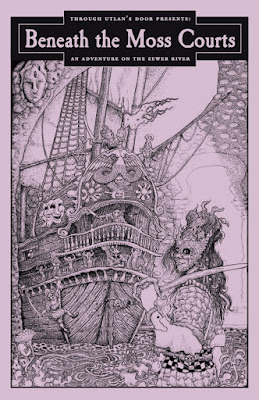 Through Ultan's Door Does ZineQuest 3! 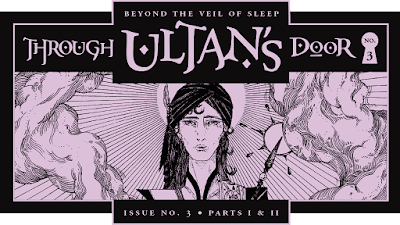 I will be launching Through Ultan's Door Issue 3 on Kickstarter for ZineQuest 3.

I know this has been a long time coming. This new issue is more ambitious than the previous issues. I hope it's worth the wait. Through Ultan's Door 3 presents a pointcrawl along the Great Sewer River that winds its way beneath Zyan, flying city of the dreamlands. The pointcrawl connects the dungeons from issues 1 & 2 with 7 other locations.

It introduces an entire settlement, the Sanitarium of the Benefactors, and numerous factions including the the sewer wyrm Cephaia, Prophetess of the Muddled Waters; her rival the Cranemay, melancholy fey witch; the Regulators of the Black Hand, dread sewer pirates; the Sons and Daughters of the Vigilant Watchers, ancient sewer mercenaries; and, best of all, the Lurid Toads, ominously polite cannibalistic parasites. It has a big sewer encounter table that brings the otherworldly sewer-of-the-dreamlands vibe hard. It even has rules for playing an opium dreaming wizard. 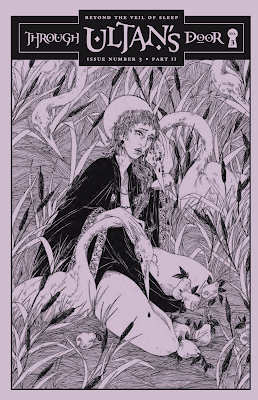 Through Ultan's Door 3 was just too much Zyan to contain in one zine. So it's a double issue, with a Part I and a Part II. Each of these parts is its own 28 page zine, with a detachable cover with a map printed on its interior like an old school module, and a separate encounter card, so you can have the map, key, and encounters all open simultaneously at the table without any extra printing when you run.
This extra room has also allowed me to commission more exquisite art for the zine than ever before. Through Ultan's Door 1 had two artists, Huargo and Gus. Through Ultan's Door 2, had five artists, Russ Nicholson, Huargo, Gus, Jeremy Duncan, and Orphicss. Through Ultan's Door 3 has no less than seven artists (!) who are creating the best art the zine has ever had. I'll introduce them in another post, but suffice it to say that Nicholson, Huargo, Gus, and Orphicss are back along with 3 amazing artists new to the zine.
As if all this weren't enough, Gus has written an entire companion adventure to Through Ultan's Door 3, titled Beneath the Moss Courts. It picks up one of the hidden locations from the sewer point crawl, the wreck of the Verdant Purveyor, the base of operations for the Regulators of the Black Circle, dread sewer pirates, and expands it into an entire siege adventures that also reaches up into the law offices of Zyan Above. It contains the first published glimpse of the city that sits atop the dungeons and sewers of issues 1-3. This adventure is also being printed as a 40 page zine, with its own detachable cover, encounter card, and a second map insert with notes on running a siege adventure. So that's three separate zines with a total of 96 pages of the dreamlands. 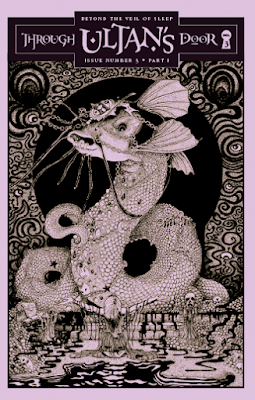 I will also be reprinting Through Ultan's Door 1 & 2 for the Kickstarter. So if you missed physical copies the first time around you'll have the chance to get them. Together, the first three issues are enough to launch your own campaign in the dreamlands and sustain maybe the first 30 sessions of lucid dreaming sandbox play.
The good news is that layout on Through Ultan's Door 3 & Beneath the Moss Courts is done. All the remaining art pieces have been commissioned, and all should be in hand by the end of February. What the Kickstarter will allow me to do is scale up the printing, so that I can print large quantities of all three issues of the zine, including the first two back issues, and Gus' companion adventure. I'm also going to pay to have the local printer I work with assemble the zines this time around.
Don't worry about the physical quality of the zine. I'll still be using my fancy French Paper Co. paper, a full pallet of which arrive not long ago. The printing technique and quality of the images will be the same as previous issues. The only difference will be that they are folded, stapled, and trimmed by professionals with the proper tools to do it at scale. In other words, each issue will just contain a little bit less of my sweat and tears. I don't think they make the zine taste any sweeter.
I will be shipping the zines worldwide, bagged, and in cardboard boxes as USPS first class packages, hopefully with tracking. (Given the zine specs I can't use media mail, or mail them as letters, or even flats.) Shipping prices being what they are at the moment, shipping won't be cheap, which I hate. I also understand there may be some of you who would like to buy the zine but are unable to do so on Kickstarter. Don't fret. Right after I ship out the zines to backers, I will put it on sale on my normal big cartel webstore, and upload the PDFs to DriveThruRPG and itch.io.
So anyway, look for a Through Ultan's Door Kickstarter on ZineQuest 3 in the first week of February! Although I will admit to having had a couple of stress dreams about running my first Kickstarter, I'm getting excited.
Posted by Ben L. at 7:04 AM 12 comments: