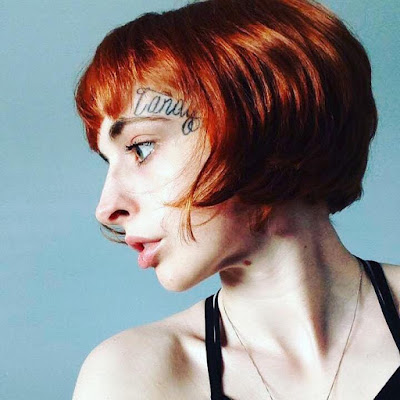 I believe Mandy, Jennifer, Hannah and Vivka. If you haven't read their harrowing accounts of Zak Smith's abuse, you should go do that right now. Thank you for your bravery. I completely disavow Zak Smith. I have blocked him on every social media platform. I will never play a game of Dungeons and Dragons with him, or work with him, or buy one of his products, or speak to him again. Our attention should be on the victims who have come forward and what they have to tell us. Support them any way you can. I have tried to.

But I have to apologize. And to say something about Zak and the OSR community. Because I think we're at a crossroads and what we do next is very important. If you think that's navel gazing I understand completely. Please stop reading now. 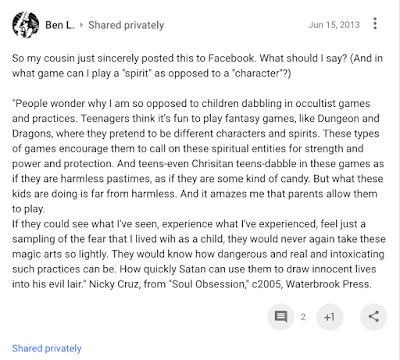 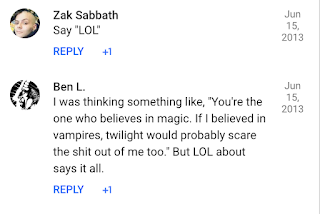 There was Zak, happy to immediately friend a newbie and play along. Another thing about Zak is that he had great taste (from my perspective). Some people would find our community through his blog and the other blogs he promoted--improbable people who showed up with rare talents, and he would promote their work right from day one. It was a clique of very creative people. Even though I haven't produced very much--one zine, a long running online game, a blog I post to once in a blue moon--he generally promoted my work. He played occasionally in my online game as well, including the early sessions, and he praised it. I benefited in that way from the increased social capital that his support gave me.

Zak also was a producer of public goods for the OSR. He seemed to have almost limitless time online. He helped convince people to get on google plus in the first place. He helped to organize FLAILSNAILS and Constantcon. He invented the term "Gygaxian Democracy" and popularized that improvisational communal practice that produced many wonderful things. I say this about his role in the community because some people inside the OSR are saying, "He wasn't at the heart of things, I blocked him ages ago" and a lot of other people outside the OSR are saying "He was at the heart of things because he was a master manipulator". I agree that the OSR was a huge mosaic with many sub-communities and people unconnected to Zak. Plenty of people kept him at arms length, or just had their focus elsewhere. I also don't want to deny that he was good at manipulating people, judging from the testimony of his victims--and my own (far lesser) experience--I would say he was very good at that. But the sad truth is that to the extent that he was at the heart of the OSR it was mainly because it's a volunteer operation and we let him do so much for us, especially those of us who were in and out of his clique.

Of course this came at a terrible price that I was wrong to tolerate. Oh my lord the fights he would get in with people. Nasty. Internecine. Interminable. Sometimes conflagrations inside the OSR around nothing more than personality, or (increasingly) with violation of his strange code of conduct for internet conversations. This created so many schisms that it was hard to keep track. I struggled to keep straight a mental map of the contours of the discrete neighborhoods that his conflict produced in my community, a cartography of wreckage wrought by his aggressive logos.

But more often these conflicts were with Story Games folks. I didn't know anything about Story Games at first. What Zak said about the community had a veneer of initial plausibility (he was smart), but over time it became clear to me that it was a bizarre obsession, a kind of holy vendetta. He was occasionally wronged by people from the SG world who would say some false thing about him. As Mandy says, at times his conflicts could spill over into anonymous rape threats and demeaning comments directed at his players (the eponymous porn stars of his blog title). That's terrifying and awful, and I have no idea who was behind them. But mainly as far as I could tell he was getting into senseless fights with SG people he disagreed with about games, fights that escalated rapidly because of his aggressive tone, and his intolerable argumentative style. He then kept tabs on the folks he was fighting with and prodded them frequently. And he had tiresome and elaborate theories about how his doing this made our community better. He had so many theories, and I never believed any of them. But I didn't do anything about it.


The first apology is to people he bullied inside the OSR. During a conflict between Zak and Paolo Greco that shook the OSR community, Evlyn M, a dear soul and brilliant artist, and a regular player in my game, bravely came to Paolo's defense and took a stand against Zak's bullying. When I had to choose between Zak and Evlyn, it was clear that I had to choose Evlyn. After all, Zak had brought all this on himself and Evlyn was only doing what seemed right to her. But all I did was kick him out of my group. That wasn't nearly enough, not by a long shot. I should have stood up to his bullying then--long before then--and condemned it.

So Evlyn ended up leaving the fucking OSR, because Zak papered things over with Paolo and life went on, and she had earned his enmity in the process. He was too central to the OSR, he was everywhere, even if you blocked him you saw him get tagged in comments or gossiped about, and she found it too stressful to be around him, because--you know--he keeps names. Evlyn I'm so sorry, I hope you can forgive me. And all the other people like Evlyn. I'm so sorry to all of you.

When I had decided to kick Zak out, I had a face to face conversation with him over hangouts to explain. Things were rocky for him at the time, because the OSR had risen up in a wave of revolt against him in defense of Paolo, and it wasn't totally clear if he was going to survive. (This is when Patrick Stuart washed his hands of him.)

When we talked it was like I was speaking to a completely different person from online Zak. He was a prince. He was generous. He said nice and empathetic things about some of the people he feuded with. I was actually grateful to him at the time for handling it all so reasonably. Although he didn't agree with Evlyn, he understood my position. He said that it sucked getting kicked out of my game, but I could make it up to him by writing a piece for his upcoming horror game Demon City. It felt transactional and icky. His framing it as something I owed him made it hard to write the thing, and I refused money for it in the end although Mike Evans offered. But I wish to God I hadn't agreed to write it, and hadn't promoted his game by posting about the kickstarter on google plus. So I'm sorry for that too.

The other group of people I really want to apologize to are story games folks. I did nothing to rein in Zak's bizarre vendetta against your community, other than argue with him occasionally about people I've come to admire like Johnstone Metzger or Jason Cordova.  I feel very bad about this. I know you don't know me yet, and so have no reason to forgive me. But one of the great hopes I have for the OSR is that it can now begin to heal the rift with those parts of the SG community that are interested in cross-overs. I think this would be very good for the OSR, and that we have many shared interests and overlapping design values, as the success of Fear of A Black Dragon shows. We have a lot to learn from you, if you'll let us.

The future for the OSR is uncertain at best with google plus going away, and now this. I don't know if the community will survive. But I hope it does, because I love this community. At its best, there are so many brilliant, vibrant, decent people sharing with one another in an open spirit, and producing extraordinary things. If we do keep going, on Discord or in some more diffuse form, we have to make absolutely goddamned sure that we don't let a narcissistic bully--and SO MUCH WORSE as it turns out, a domestic abuser and misogynist--do the work for us again. And we have to protect ourselves against someone who poisons our relations to one another and to surrounding communities for reasons that we do not share.

I am moderating comments for the time being on my blog. I welcome criticism and will certainly post it and try to respond to it, even if it's angry. I deserve a measure of your wrath. But I will not approve comments from Zak (or Kent).