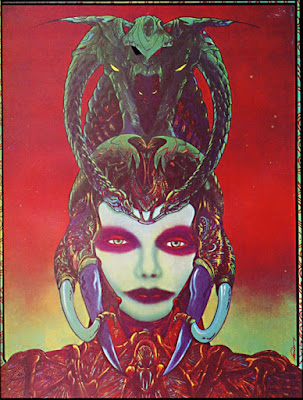 The Chatelaine of Storms is the powerful and fickle enchantress who rules Rastingdrung. Naturally she attracts to her court all manners of hangers-on, including individuals who would pry from her the secrets of her formidable art. Covetous of her station, she is stingy with such knowledge.  However, it is useful to her to have a number of such talented individuals at her beck and call, and she delights at the opportunity for intrigue and competition it provides. At any given time she thus maintains seven apprentices. They are arranged in a hierarchical order, each station above the next. Moving up the ladder comes with perquisites of the Chatelaine's time and knowledge, as well as the material benefits of comparatively luxury, esteem, and command. Needless to say, the apprentices are constantly scheming and backbiting. The ranking is nominally established by the high stakes public performance each apprentice gives at the annual Festival of Sybarites. But the order is subject to frequent alteration at the Chatelaine's whims. These are the Chatelaine's current apprentices, working upwards from the lowest station.

Mordrovo is a thin and greying sorcerer who dresses in shabby clothes. His powers are feeble, limited mainly to spells involving his signature colored fogs. He affects a charming combination of deluded grandeur and abject self-pity. He resides in apartments above the stables. Mordrovo is the longest serving of the Chatelaine's apprentices. 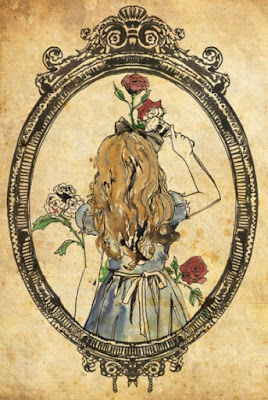 Adriana appears to be no older than seven, and wears dresses with bows and ribbons. Her voice is that of a crone. She is served by her apprentice Valtropos, a pale and acerbic man who is also said to be her lover. She is an intelligent and capable practitioner who was the 2nd Apprentice until recently when she called into question the intelligence of the Chatelaine's doltish paramour. Now she resides nears the maids quarters over the palace kitchens. She hatches schemes to resume her lost position. 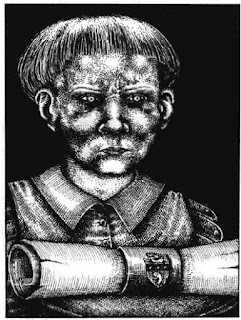 Spaldiv is thin and spindly, all angles and points, with a pasty face. He is served by his spectral familiar Athanasius, an ancestral spirit bound to him through rituals performed in his family tombs. He would have risen higher at the court, but he smells of the grave, and is attended by apparitions and ghostly events. 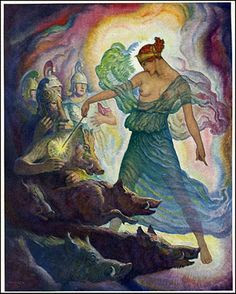 Bathsheba is a village witch. She claims to be possessed by the great Ghinorian sorceress Zashtassa, Queen of the Six Circles. No one would believe her except for the fact that on occasion and to her own surprise, she casts enchantments of a power vastly outstripping her meager education. 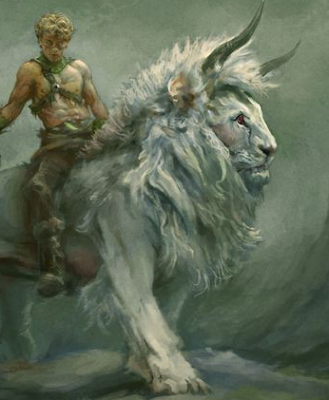 With the typical square draw and handsome profile of Tarantian nobility, Almurek is a strapping and muscled youth. He spends his days traveling in the wilds. He is said to speak the language of all beasts, and to know how to call the lesser winds. His familiar is a great white lion, which he rides into court to the delighted squeals of admiring maidens. 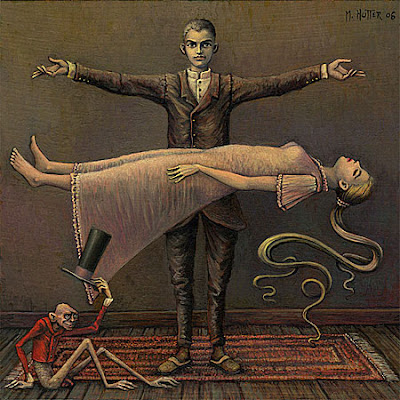 Mercurio has devoted his life to mastering the fickle and mysterious phantasmal force. None know his true true face, as his appearance is constantly changing. Seeming wonders travel constantly in his wake. Those at court have quickly learned that in his presence reality always lies behind a series of veils. He resides along with many curiosities in lush apartments near the Chatelaine's closest advisors, concealed by intricate illusions. 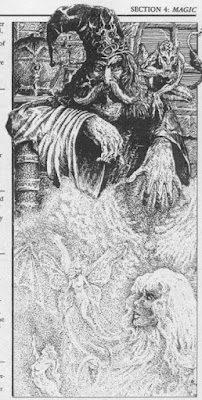 Albinus is the Chatelaine's advisor and confident. He is a powerful and corrupt magus in his own right. He is said to delight in the summoning and enslavement of faeries, from whom he draws his power, and extracts many secrets. By his own choice, he inhabits carefully designed apartments near the palace dungeons, where he keeps his slaves close to hand in their dolorous prisons.

The Strange Rhythm of Playing Over G+ and Early D&D

I just finished DMing my third ever session of google+ (or any internet) d&d. I was rolling both encounter checks, and percentile chances that various creatures (people) would be in their lairs, and happened not to get very many encounters. This resulted in a large number of unoccupied rooms. I feel like in a face to face game, although this might be a little slow, you could sort of handle the rhythm of it in such a way that it wouldn't be a problem. But in Google+, somehow it doesn't really work. I noticed it even in my last game, where the players went through (only) four rooms without encounters, before moving into some pretty gonzo high action stuff and already it was like I felt like the thing was dragging before the action kicked in.
Here's a theory. Here are some features of the game I was running, and also those I have played in on G+ (1) They are episodic in nature, in that there is no presumption that the same group will be present each time, even if there is a hoped for continuity. (2) Everything begins and ends outside the dungeon, for the same reason. (3) XP for gold. I like all these features a lot. They're perfect for playing D&D on google+. They also (self-consciously) mirror early D&D practices, e.g. in Gary's Greyhawk Campaign.

I think these features partly explain some of the facts about rhythm. Take the episodic nature of the game. If I play in a session where some goal is worked towards without being achieved, that's disappointing because I might not play in the session where the payoff comes. Another part of it is, I think, the treasure for xp rule, again a classic. Like, if everything is being measured (goal-wise) in terms of the treasure haul, then there's huge pressure to have at least a whiff of a lot of treasure every time. 0 gold in a session = total failure.
The weird thing is early D&D had all of these features,but also had lots of empty rooms and low key time. I think this might explain (in conjunction with the huge groups in early d&d, not so much replicated on G+) the otherwise baffling use of the "caller" who leads the group by saying what everyone does discussed in the DMG. I have trouble imagining that being fun if stuck to closely, but it would help handle the flow of the game, moving it much more quickly over multiple spaces where no action occurs so that more "success" could be had in each session.

However, since I'm not interested in having a caller, I think this really will affect how I design dungeons. I'll aim for almost 0 dead space, and more planned encounters that are automatically triggered by moving into an area. This isn't exactly unfortunate, but it is unexpected. It also makes it hard to imagine designing living breathing dungeons with multiple factions cohabiting. So much for Red Nails.
Posted by Ben L. at 10:38 PM 4 comments: