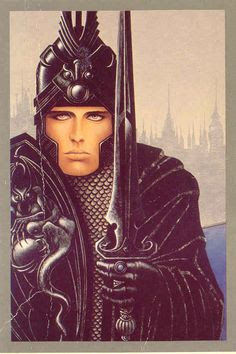 Sir Tresken the Vigilant was the first to step through Ultan's door, the first human in a century to travel from the waking world to Zyan, flying pearl of the dreamlands. During many expeditions in that twilight realm his exploits were daring and remarkable. On his first excursion he slew the corpulent sow, torpid mother of the malevolent white swine. Soon after, he raided the catacombs of the Fleischguild, liberating treasure from shambling horrors and guild butchers. Much later, he traveled to the true planar temple of their deity, Vulgatis, where he slew her demonic organisms with impunity.  Sir Tresken tracked down the location of the lost legendary hanging Summer Palace of the Incandescent Kings, the El Dorado of the dreamlands. And he recovered from the cenotaph of the Lady Shirishanu her legendary Petal Blade. It was with the Petal Blade that he cut down the Shadow Weaver, beloved of Azmarane, spinner of countless soldiers out of the stuff of darkness.

Sir Tresken also won the Twin Saddle of Vyanir, fashioned by Saint Garanax, the founder of his order, the dread Storm Riders. Garanax had used it to break the first of the war crows, leading them from the inverted White Jungle to the waking world. Sir Tresken followed in Saint Garanax's footsteps. Each traveled to Wishery from Rastingdrung through a shimmering door. Each served the same two mistresses. In the waking world, Tresken was the sworn servant of the Chatelaine of Storms, the witch queen from whom he drew his powers. But in Wishery, the Petal Blade bound him to the memory of the Lady Shirishanu, legendary poet-warrior paramour of the last of the Incandescent Kings. Had he lived longer Sir Tresken too would have broken wild crows and been the stuff of fairy tales. 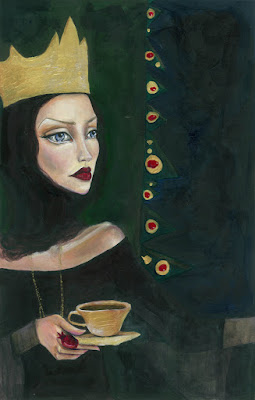 At the moment he died, the Chatelaine was drinking her tea as she inspected the sample cakes of her pastry chef for the Festival of the Sybarites. Their long love-hate relationship was a source of constant amusement to her, and she was preparing a particularly acerbic remark about the quality of the lime icing when her hand began to inexplicably tremble. Tea spilt in a cascade down her damask gown, and her eyes darkened. For reasons she did not understand, for the first time in long years she became afraid, not of the present, but of what was to come. The carefully prepared retort died on her lips, and hastily approving the splendid cakes, she withdrew to quiet her nerves, feeling suddenly alone in the halls filled with fawning courtiers.

At that same moment, in Wishery, as Tresken's life blood poured from a mortal wound onto the dueling ground, the Petal Blade gave a keening cry, a wave of raw grief that burst upon all at the pagodas of the hanging merchants. Fat Malichar burst instantly into tears, and even Nekalimon who hoped against hope that Tresken would be slain felt so sickened that he spilled the precious moonstones he was counting into the chasm below. The Petal Blade grieved on behalf of its mistress, and all of Zyan, for the waning of the hope that had begun to dawn in that hopeless place.

Sir Tresken died in the forty first session of our campaign. May he rest in power.
Posted by Ben L. at 10:36 AM 7 comments: