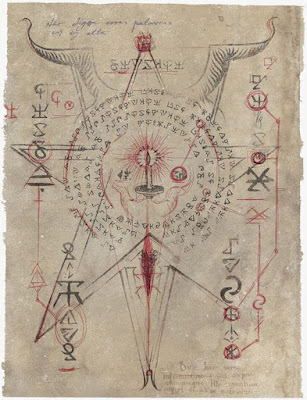 A while back I posted some downtime rules for magical research, which you can see here (they get expanded in my forthcoming zine, Downtime in Zyan). These include rules for the creation of spellbooks that were intended to make spellbooks more interesting and evocative. The idea is that spells can only be held in a book that is a splendid item fashioned by an artisan our of remarkable materials. Such wondrous artifacts consist of a prison architecture including thematic unity that can hold a certain number of spell levels. To bring one into the world is to affect the setting.
The idea is that spellbooks will be known by name, sought after by many wizards. Finding one would feel rightly like a big deal, and spells from the common list will have a distinctive flavor when learned and cast from one of these tomes. On this approach, to introduce a spellbook is to introduce not only its wizardly author, but also a master craftsman, so every spellbook comes wrapped in a bit of lore.

According to the same rules, it is possible to copy such a book, which is then not a splendid item. This post presents some of the more common, widely copied magical books. Instead of randomly dicing for a new magic-user's starting spells, randomly dice for one of these. These can also be used as templates for the magic-user's player to make their own, thereby contributing an important text and author to the setting of the game.
This post is one in a long tradition of trying to make spellbooks more interesting. It was influenced by Brendan S's post here, which I highly recommend, as well as slew of posts reimagining spellbooks from the heady early days of the OSR blogosphere. For the purposes of this post I have limited myself to starting spells in OSE. Note that should a player wish to design their own spellbook, the spellbook should contain 2 first level spells and 1 second level spell. No starting spellbook may contain more than 1 of the most powerful 1st level spells: charm person, sleep, and light. (Light in OSE is a strangely powerful spell given the effects of being blinded and the lack of limitations by HD.)

Starting magic-user spell books are stained and tattered copies of the most common spell books. To see which one, the player should roll 1d6 and consult the table below. They can be sold as a regular book for 250 gold pieces, as a sort of curiosity, to anyone who might buy books. But the real value of the texts are known only to the the small number of actual wizards, who are, sadly, likely to already have a copy of these books of paltry magic (10% per level of the magic-user). Only those without a copy will want to buy such a soiled copy, likely for 500 + 1d4x100 GP.

1. Beyond the Convex Mirror*

This book was authored by Oliphaxus the Heretic Sage. The original was created for him by the workshop of Selim Aphastes whose unparalleled creations abounded with consequences unintended and unforeseen.  The original is coptic bound betwixt darkened mirrors that strangely distort what they reflect, shards of a shattered portal between worlds. The lettering of the title is etched into the glass, and painted in silver hues.
Inside, the work is an abstruse treatise on the optics of occult mirrors. Those who deeply study the work may intuit the principles for pulling reflections from mystical mirrors as strange sorceries. All spells learned from this book teach the way to summon a different mystical mirror from which the enchantment is drawn. The book may also be used to research any phenomenon having to do with mirrors, optics, or reflections.
Cheap copies, such as those likely to be possessed by a starting wizard, often have cloth boards with a plate depicting a mirror. They also include tiresome contemporary appendixes with more "up to date" views about optics.
1st level: Light, Ventriloquism
2nd Level: Mirror Image

2. Enchantments of the Twilight Court*

Authored by the poet enchanter Elidar who it is said sought to forsake his humanity so that he might dwell amongst the fey courts and dance in their glades forever. To make the book, Elidar brought glittering ink distilled from the tears of fairy laughter to Telisa the star touched, who knew the art of binding cold and fickle starlight into pulp. For this pulp she gathered the tough stems of cat-tails, dandelion dander, and the shells of robins eggs and fashioned creamy paper, soft as a babe's skin. She bound the book in cloth boards of amethyst hues, with darkling endpapers, twinkling like stars new emerged at dusk.
Within these creamy pages is an illustrated poem about the allures and charms of the fey Twilight Court. Its verses contain three potent pieces of fairy magic that one may employ only if one's heart has truly been awakened to the temptations of fairy. The casting of these spells betrays their fey source.
Lesser copies, such as those in the meager collections of newly minted wizards, are often bound in plain boards with pink wraps painted with the silhouette of a gauche and stereotypical fairy. Sometimes they are illuminated in a cloying and distracting fashion intended to perk the poem up.
1st Level: Charm Person, Detect Magic
2nd Level: Phantasmal Force

The work of Daglon the Geometer, mystical master of force and balance, architect of suspended structures. He had the original crafted by confounding Ubaes who constructed books like puzzles and conundrums. Geometry of Unseen Potencies is bound between polished stones taken from the hearts of substantial clouds in Wishery. Although ponderous in appearance, the book weighs almost nothing.
Within the book is a complex geometrical treatise on otherworldly shapes and forms. Many of its intricate geometrical constructions and proofs are on elaborate foldout pages. The final proofs are actually powerful sorceries that exert strange forces. To master them, one must master the theorems that have come before.
Cheap copies, such as might fall to a young magician, are often on a single scroll that one unrolls revealing each proof in succession. Such copies require ponderous turning backwards and forwards to remind one of the place in the proof structure.

This work was penned by Saffroy, a meticulous duelist with both sword and spell. He had many dashing victories in his youth, serving in his middle years as a tutor to the aristocratic scions of magical families, before he was slain in a final duel by the treachery of Imbabo. To create the Principles of Arcane Dueling, Saffroy brought his magical sword Fluid Riposte to the workshop of Pentalon the Illustrator, whose famed depictions of historical scenes produce melancholy daydreams of shocking vividness. Pentalon had the sword melted into a metal cover for the book, illustrating the book with swirling scenes of swordplay and spellcraft.
Within the covers, an antique treatise on the history of magical duels, and the etiquette, rituals, and rites of the dueling code dating to the era of the Sorcerer Lords is printed on heavy vellum. By reading the text and daydreaming about Pentalon's captivating illustrations of three famous historical duel, one may bring the scene to life sufficiently to learn from them how to cast the spells illustrated in the scene.
The depressing copies found among the possessions of marginal wizards are leather bound, dusty tomes, with workaday illustrations and dense text boring enough to make one doze. Only in such delicate involuntary catnaps may one--if one is lucky--recover the enchantments of the duels depicted.
1st Level: Magic Missile, Shield
2nd Level: Web

5. Lesser Emanations of the Archduke

This grimoire was written by Melanoch, eerie sage of forbidden lore, who worshipped the black sea of chaos and wrested knowledge of what lies above the heavens and below the earth from the hands of those who guard it. To the doomed bookmaker Zunnis, who had forsaken all hope owing to a curse of the gods, he brought the black scintillating peacock feathers of a corrupted seraph of the Overworld, from which Zunnis fashioned a soft cover of feathered eyes. Within is a treatise on the infernal spirits know as "lesser emanations of the Archduke". It contains speculation about their nature, and testimony of those who have held congress with and supposedly mastered them. Deep penetration of the text allows one to deal with these emanations, and summon them to perform unsettling sorceries or to protect oneself from them and their ilk. The text is the first in an intended trilogy, a mere prelude to Melanoch's supposedly lost or unfinished magnum opus.
Common editions of this work are bound in ordinary black goat skin. They tend to be decorated with edgy illustrations of unwholesome scenes of sacrifice or pornography. Sometimes they are barely legible owing to the sinister lettering style of their scribes who overcompensate for lack of art by developing a doom-laden scrawl.
1st Level: Sleep, Protection from Evil
2nd Level: Invisibility

6. Inner Illuminations of the First Organ

This meditative treatise was conceived by Poscilles the Psychonaut, who it is said acquired six of the nine occult organs, until his form could bear no more and he disintegrated in a flash. (Others say he wanders still in inner landscapes in search of the Seventh Organ, which no mortal has acquired.) Whatever his fate, in those earlier days he brought silver saplings of the mighty shangra tree that grows on the inner astral plane to Saekeko the Gardener, whose books overflow with organic forms and lush illustrations of natural history. From their pulp Saekeko fashioned a pale grey vellum that thrums with inner meanings, and from their bark a set of silver boards into which they burned a single eye surrounded by a ring of flowing occult symbols. Within is a bewildering work, one part treatise on the inner plane and one part ascetic exercises to prepare ones body for incorporation of the First Organ. This text is illuminated by teeming otherworldly vegetation. Those who engage in the ascetic and meditative exercises, preparing body and mind, are eventually able to open the First Organ, a floating spiritual eye, from which the spells of this treatise are cast.
Lesser editions, such as commonly circulate, are often copied with rainbow stained boards for covers. Inside, in place of Saekeko's glorious illustrations one finds earnest but ethereal illuminations of spirit beings with a third shining eye.
1st Level: Detect Magic, Light
2nd Level: ESP
*These two spell books are inspired by playing in Nick Kuntz' Twilight Shores game, which has a mirror universe in it with which my character and I are obsessed as well as a captivating fey realm that is at once close to hand and far away.
EDIT: Check out this sweet post at I Cast Light! that expands this system by tying the starting spellbook her to associated starter gear for magic-users. It ramps up the flavor nicely.
Posted by Ben L. at 5:13 AM 13 comments: