Retired But Not Forgotten 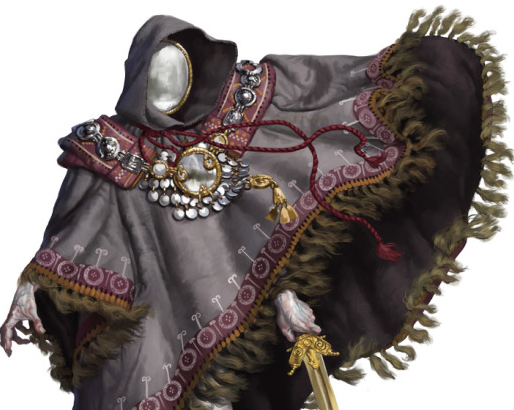 All honor to Shea, master of compass worms, lord of the quiet ones! Who explored the sun-drenched haunted shores of the Shattered Isles, who faced down Yeti in silent snowy wastes, who liberated the Book of Six Circles from its trembling brass guardian, who sank beneath the waves to loot the Submerged Spire of Sarpedon the Shaper, who descended into the utter depths of lost mines where he laid eyes on the meteor that destroyed our world, and felt its blistering heat against his skin. He was at home in the quiet and forsaken places of the earth.

But all this was not without price. Small of stature, his delicate, handsome face was torn from him by the barbs of the smiling golden mask of the Interrogator. Ever after, he has hidden the ruins of his face behind a featureless mirrored mask, along the surface of which he can cause nightmares to flow. His occult explorations and congress with demons have bent him from his former upright and pure disposition. Slowly the code that binds men loses its meaning for him. At great risk to his own sanity, he has called forth the Compass Worms from the Sightless Labyrinth. Beneath his robes, his flesh is covered with sigils that fashion his body into a living conduit for the tangled horrors known as the Quiet Ones. For a period of time, his consciousness was locked in a hyperdimensional prison beyond space and time, while his husk was inhabited by an ancient acolyte of forgotten and evil gods. He has been to hells and back.

Although few were comfortable in his presence, he will be sorely missed by his comrades. They relied ever on his keen judgment and crooked sorcery to rescue them from peril. There will always be a place for him at their campfire.
Posted by Ben L. at 1:43 PM No comments: