Punishment by Puppet, Splendid and Terrible

The Inquisitors judge all men by the crooked law of Zyan. Like the assayer marking the invisible boundary of each plot, so the Inquisitors divide a life with their casuistry, saying, "this action was permitted, that forbidden". For each transgression, they weigh culpability with nuance, reckoning up the punishments. Justice is to be seen as well done, and when done right, justice is a splendid show. In reality, the sheer volume of cases elicits standardized responses with wry wrinkles around the edges. Most creativity is reserved for the class of acts deemed "iniquitous abhorrent". For it is only acts of this singular severity that are punishable by the puppet shows for which the Inquisitor's Guild is beloved.

Such shows are relished by all ranks of Zyan. Young and old, from clans high and low, they stream to the Theater of Justice in the tilted neighborhood of Cusp. They come bedizened with orchids in their hair, carrying picnic baskets, and bottles of the ochre wine of Chimes, or jugs of the spicy grog of Gutter. Filling the seats of the open-aired theater, for a time, they forget their cares. Laughter and breathless chatter ripples through the crowd, as they comment eagerly on the wretched occupants of the small gilded cages below, and wager on the puppets they are to face. With great morbid anticipation, their glance is drawn to the massive doors that stand opposite the cages. These are painted in gaudy colors, and decorated with images of sacred Afatis, the many headed queen of puppets. When the festival horn sounds it clarion call, the cages are opened by boys who run to the edge of the stage to be pulled up by ropes. To gay drum beats, the massive doors swing, and the punishment puppets step forward from the darkness into the light of the arena to deafening cheers from the crowd.


No two puppets are the same, although crowd favorites resurface from time to time.  Sublime products of antique art, they possess stunning elegance, cruel caprice, or comedic wit. Fiendishly clever machines, they are constructed of the finest materials: patterned silks and damask, draped atop polished wood with bronze and copper flourishes, and cables of twisting white metal. In a city where mask-making is the highest art, the masks born by the puppets are rare splendors. Some bear masks front and back, two opposed puppets in one that turn now this way, now that, fighting in contrasting styles. Some conceal masks within masks, peeling back to reveal new layers and inner transformations, others masks dangle as grapes from elegant chains, or peer from many places within the swirling silks that cover the puppets mechanical core. Some are gruesome weapons, slaying with flicking tongues, or sprays of pink acid, or pouring from their smoldering eyes killer wasps enraged by the heated metal that surrounds their hive.

The puppets' modes of locomotion vary. Some contain performers, skilled acrobats on stilts who fight with wild leaping abandon. Others are giant marionettes, operated by performers in the roof beams of the stage. Still others are arcane in nature, linked to the movements of a mime on a separate stage high above, or operated through the changing pitch of a string choir. The most perilous are those possessed by an ancient malevolence, moved by the cruel whims of a demon of Afatis, or guided by an intelligence from beyond the nighted gulfs of space. Such puppets are used with great caution, for they often run amok with bloody catastrophe.

The guildsmen fashion smaller puppets too, man-sized automata that guard shrines or assassinate guild foes. Some of these life-sized horrors are despatched to terrorize the Guildless, the exiled mutes who dwell in the sewers of Zyan Between. Like relentless clockwork nightmares, these automata whir and stutter through the blackened tunnels bringing red pain and desperate pursuit to these lost souls.

The siege puppets, fruit of another branch of the Inquisitor's baroque art, are suits of armor, encasing an acrobat pilot, usually on stilts. They often have the appearance of fearsome beasts, like the numinous jellyfish of the Endless Azure Sea, or the crystalline apes of the White Jungle. Armed with baleful weapons to break shield walls, they are guarded by sigil-covered lanterns that project ethereal fields of evanescent beauty. The art of the siege puppet is now fading, and the suits are passed down as a precious inheritance within prominent guild families. The noble scions of these clans are trained from youth to operate the twisting cables in leaping combat on stilts. 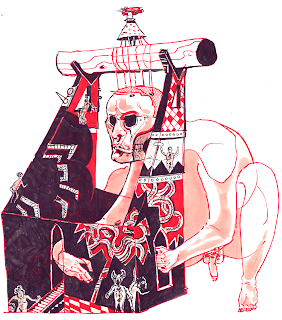 When the huge head of the Flaccid Leviathan, with its vacant staring black sockets, and expressionless stitched face, rears like a nightmare deity from behind the proscenium, throngs swoon, reason dissolving like a swirl of sugar in a tincture equal parts thrill and terror.

This great being was brought from Phantamoria, the dreamlands of the dreamlands, when Zyan was young and the ways were still open through subtle sorceries. The substance of the Leviathan is strange: skin papery like wasps nests, organs like luminous jellied plastic. It emits a smell, sweet and acrid, like caustic anise, and occasional sounds that fill the mind, like the call of whales drowning in an oxygen starved sea. Whether the Flaccid Leviathan is one of a whole race of that alien realm, or a singular entity, whether something created, or something slain and preserved through necromantic abominations, is not known even to its handlers. It is brought out but rarely, only once or twice in a generation, for grand occasions with huge numbers of the guilty. For its preparation and repair is the work of many years.

The Flaccid Leviathan is operated by threads that run between a harness of moonstone set directly into the beast's cerebellum, and a small puppet above that wears a red wig. Elsewhere, a carefully selected child, cruel and imperious, is fitted with the wig's sympathetically attuned twin. This callous youth is presented with a toy simulacrum of the Theater of Justice, complete with little clay figures that replicate the desperate movements of the guilty, who run screaming or hide uselessly in quaking terror at the child's questing fingers. The delighted child plays with these toys, producing in the limbs of the Leviathan the like movements: placing the guilty where it will, posing and undressing them, making them fight, enacting strange shows and scenes. And always in the end, when the novelty of the game wears thin, pulling with great satisfaction the limbs from their bodies squishing their little heads, or mashing their bodies together. (This child is always quietly sacrificed afterwards in the Grand Abbattoir of the Fleischguild.)

Her large form comes onto the stage, stumbling, abject and praying, a parody of religious devotion. She wears a corset of metal, bulging as though with sagging flesh. Her wooden mask, with gray hair over a severe and matronly face, is lifelike and subtle. It is fixed in an expression of intense obedience, as she constantly glances over her shoulder, as though seeking direction from what follows. For the object of her supplication, the strange deity of her singular faith, is never far behind.

This alien god is a tangled mass of tentacles that moves octopus-like, its slender coils caressing the Sword Crone and pushing her forward. Gripped in its many divine pseudo-pods are the instruments of its brutal ministrations: long razors, probing swords, and enormous shears.

The Sword Crone always presents the god of her fawning obeisance to its victims, entreating them by gesture and example to prostrate themselves before their savior and accept its surgical attentions. Should they stubbornly refuse, she becomes enraged, using her coarse hands and inhuman strength to pull them towards their bloody salvation. In reality, the puppeteers sit within the deity, moving the Sword Crone by controlling the tentacles that caress her at many points.

The disgorgers move with relentless purpose through the abandoned tunnels, catacombs, and sewers of Zyan Between, stalking the lost souls that haunt these liminal spaces. The guildless, who have been rendered speechless with the acid "wash" and exiled to the darkness below, call them "Worm Gullets" or "Terrible Ones" in their queer sign language. When they find themselves driven back against rusting bars, or caught in a sudden ambuscade as the disgorgers rise from the black sewer water, they scream silent screams their ruined vocal chords can longer clothe in sound. But the disgorger understands. For it was built to speak the silent language of their fear, and it faithfully provides the response their cries anticipate.

The attack of the disgorger is most terrible. In place of the intestines and lungs, their hollowed torso contains a coil of wire tendrils. With a raspy heaving and metallic panting, they disgorge the tendrils that surge towards the head of the prey, strangling, choking, bleeding, and decapitating. Retracting the severed head, drawn back like a flopping white bellied fish caught in a net, into its jaws, unhinged, impossibly large, and down it goes to its distended belly. Here it rests in an alchemical bath, shrinking and hardening in a days span, acquiring a shiny surface like black lacquer on iron. Thus it takes its place among the coils as a memento. Those disgorgers who have hunted long in the tunnels have many such blackened doll's heads among their coils.

In combat the disgorger strikes with two weapons, often scavenged from its hunts. Provided it has not yet ingested a head, it may instead choose to disgorge its coils. If the attack hits, the target takes 3-12 damage and must save vs. death or be instantly decapitated. It the target saves, he will take 2-8 damage automatically every round, until the disgorger is slain or the target manages to extricate himself. Whatever the result of the attack, once it ends, the disgorger must spend the following round retracting its tendrils.

Child of the Sun

This sublime suit of armor was fashioned long ago by Helicanto at the decadent zenith of this strange art. It was one of a series of celestial siege puppets--gorgeous objects of a baroque genius--each representing an alchemical figure associated with one of the astrological houses. The Child of the Sun was constructed for Delandes, third son of the head patriarch of the Clan of Bilateral Hermeneuts, whose trade is and ever was the interpreting of contracts.

The Child of the Sun is lustrous, glinting with hues of burnished brass, red copper, and glistering gold. The helm is a serene face of the sun, around which has been affixed a corona of effulgent rays. The massive limbs trail streaks of metal that spark when struck against stone. Alchemical symbols are loving painted across its now tarnished surface, where many ersatz repairs have left a patchwork appearance.

In one of its hands holds the Searing Star, whose massive ball of polished yellow quartz is spiked with metal flames. It is a terrible weapon made for scattering foes and smashing defenses. It's other arm wields the Solar Lash, a cord of flexible metal that glows with an internal heat, made to ensnare and sear foot soldiers. When the Solar Lash hits a target, the target must test 4d6 under dexterity or become entangled, taking automatic damage for each round after until extricated. When the Child of the Sun is attacked by magic, its projectors produce ethereal shields, that glow like many-hued clouds of cosmic gas as they absorb and nullify the magics.