Downtime in Zyan: Pants or No Pants?

Downtime in Zyan, my new zine, has just launched on Kickstarter! The zine presents a system for downtime, the activities characters engage in between adventures. Brought to life by the whimsical and alluring art of Evlyn Moreau, the mole rats of Zyan will show you how to transform the neglected space between adventures into a site where player-driven schemes and dreams grow with delightful results.

Head over to the campaign and you'll see some exciting stretch goals. Half of the stretch goals for this project are about sharing the profits with my dream team. It’s a way of recognizing Evlyn for her fantastic art that has brightened our collective existence for the better part of a decade in this corner of indie rpgs, and Lester for his visionary graphic design and layout, which has given Through Ultan’s Door its distinctive (and award-winning) look. Both members of the dream team also played in my original dreamlands campaign, Evlyn as her character Satareh who explored the hanging Summer Palace in the bright groves of the inverted White Jungle, and Lester as the lizard man gladiator Sleestakarus whose dreamland picaresques include snatching victory from the jaws of defeat in the Gauntlet of the Panther Priests. It means the world to me to be working with them both on this project. Along the way there are also Kickstarter exclusive stretch goals that provide a handy reference to the system of downtime activities as well as a pamphlet with special rules for carousing in Zyan!
This Kickstarter presents two versions of Downtime in Zyan. The first is the modest edition. In keeping with the human preference for pants, this version has added bottom coverings to the illustrations of mole rats that otherwise would appear naked to human eyes. The cover illustrated above is drawn from the modest edition of Downtime in Zyan. But this Kickstarter also presents an option to purchase a Kickstarter exclusive bold edition of Downtime in Zyan that presents the mole rats as they actually dress and prefer to be seen: without pants. I encourage you to think of your pledge for the zine as a vote between these two editions. Choose sides in this eternal struggle and back this Kickstarter by clicking here!
Stay tuned, I'll have more exciting news on blog soon about Through Ultan's Door 4. Until then, I'll see you in slumberland. 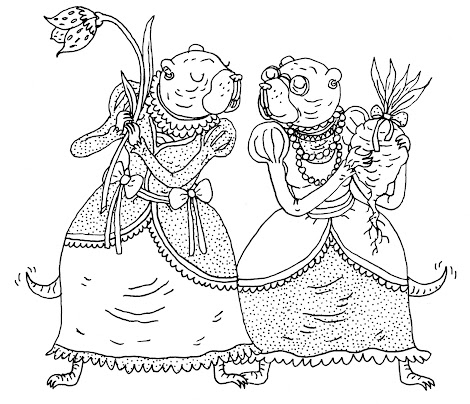 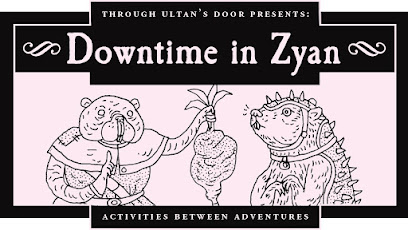 On Tuesday 2/8 I launch my next Kickstarter, this time for Downtime in Zyan, It presents a unified and flexible system for handling the actions characters take between adventures. Brought to life by the whimsical art of Evlyn Moreau, the mole rats of the dreamlands will show you how to transform the neglected white space between adventures into a garden in which player-driven schemes and dreams grow with delightful results.

Longtime readers will recognize the discussion of downtime activities from this blog. In terms of rules, it is the single contribution I am most proud of to the emerging OSR style play. The zine unifies, expands, and develops my posts on downtime into a single approach for the downtime phase of play, with rules for acquiring skills, building institutions, cultivating relationships, crafting splendid items, gathering intelligence, mastering martial techniques, researching obscure topics, engaging in wild revelries, plumbing the perilous depths of spellcraft, and seeking enlightenment through spiritual exercises. For newer readers who want a taste of the system take a look at the posts on building an institution, cultivating a relationship,or doing research.
The zine also contains an article on the theory of downtime, and more importantly, an article explaining how GMs can leverage downtime to help build their campaign setting and sandbox world, and prep adventure locations and NPCs. By integrating this system into your campaign, I really think you can supercharge active player involvement in your campaign and bring the sandbox to life in new ways.
The zine is system agnostic, but written with older editions of Dungeons & Dragons, their retro-clones, or newer rules-lite "OSR" games in mind. It can be used with any fantasy setting and doesn't presuppose familiarity with the setting of Zyan presented in Through Ultan's Door. If you are interested in following the project and being notified when it launches, you can do so here.
On Tuesday, when the zine launches, I will also have big news about what's next for Through Ultan's Door. So stay tuned!