So You Want to Make a Zine: Paper Selection and Physical Assembly 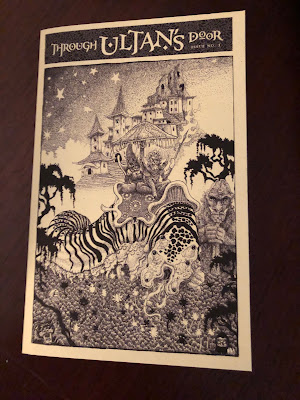 So I've been working away on my first zine, Through Ultan's Door, and the first issue is ready for physical assembly. Along the way, I got a lot of good advice from other people about techniques and gear. I then fiddled around with their suggestions, learned about different kinds (weights) of paper, found out about the maddening limitations of various printers, and thought about weird stuff like how you actually staple on the incredibly narrow spine of a folded piece of paper. I thought I'd share the fruits of my experience with you, because you might want to try your hand at the zine game. This is the post I wish I could have read when I was embarking on this.


Suppose that writing, art, and layout are done. You have a PDF ready to print. The first thing you need to think about is what kind of paper you want to use to print the zine. This is obviously true if you're printing at home. But if you're printing at a print shop, you'll still need to select paper from their stock or provide your own.
Broadly speaking, paper is divided between "paper" and cardstock. Cardstock is the thicker stuff, literally the stock for business cards and wedding invitations. There are three different weighting systems that people use to classify the thickness and sturdiness of paper. The most commonly used in the US is a system that simply puts paper and cardstock on a single spectrum by weight: 20 lbs is normal printing and copier paper, 28 or 32 lbs is what you might print a nice resume or brochure on, and 60 lbs + is cardstock. Another weighting system, used for example by French Paper Co, employs a separate scale for paper and for cardstock. On this system paper is called "text", so there'll be a weight and then the letter "t", and cardstock is called "cover" ("c"). So, for example, on this system 80t might be much less thick than 60c. Confusing, I know, but the link above converts the various measures for you.


This really matters because the weight of paper you use has all kinds of consequences, including aesthetics, price, the viability of trimming your zine, and what your printer is able to handle. The most important thing to say is that you really need to test out different paper weights and types on the printers you intend to use. Luckily, you can usually order single sheet samples of paper pretty cheaply from paper sellers (like $1 a piece). As Nick Kuntz taught me, if you want really fancy paper, the French Paper Co. will send you samples of every single paper style at every single weight they sell for $30 plus shipping.


People usually use a sturdier cardstock for the zine cover, and lighter paper for the zine interior. If this is your first attempt and you have a limited budget, my advice would definitely be to go with a 20 lb interior and 60 lb cover, both of which you can purchase on Amazon with free delivery if you have prime. 20 lb is normal paper for the interior, and a 60 lb cover is just enough of a difference to give it the feel of a cover. These are the normal, baseline weights for most zines I see.

The first issue of my zine consists largely of the dungeon that lies on the other side of Ultan's door. I really wanted the zine to be usable at the table. So I decided to produce a zine with a detachable cover with a map on the reverse, like old school modules, that could even stand up like a tiny DM's screen. I also decided to include a separate card with the encounter table reproduced on it, so that you could have the map, random encounters, and key all open at the table, running the whole thing straight from the zine.

For this reason, I went with a French Paper Co. 100c cover, which it turns out my inkjet printer can handle printing. (EDIT from future Ben: hahahahaha NO, this broke my printer eventually). It has a very sturdy feel and stands up nicely when opened at the table. In the end, for the interior I went with French Paper Co. 80t "smart white" paper, which is roughly 32 lb interior on nice looking paper because I could. This zine's been three years in the making, and so I want it to be nice. I'd say 32 lb is about the most deluxe you might want to go on the interior paper if you want it to look anything a zine, and still be able to trim it.

If you print at a print shop or at Mixam you can have them assemble your zine for you. But suppose you print it at home, or you get it printed at the print shop, but do the assembly yourself at home. (EDIT from future Ben: I started out with issue 1 printing at home, then switched half way through to printing in a print shop for the remainder of issue 1 and on to issue 2. But for both issues I assembled everything by hand at home.) In that case, once you have your zine printed, you will need to fold it. I find that it's hard to get a really neat fold if you try to fold all the sheets at once, there's a lot of rounding and stress marks on the paper, and it's hard to keep the fold perfectly straight. However, an amazing device called a Score Pad recommended to me by Keith J. Davies solved that problem for me. It comes with a handy little bone folder to score the paper. 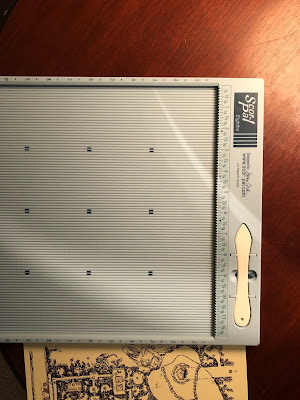 You lay the paper or cardstock on the score pad, which has a ruler along the top with tiny little grooves running along each 1/8" marking. You can then run the bone folder lightly along the groove you selected (5 1/2" in my case) to make a light score that doesn't damage the paper. You then can fold it over using the guard rail to the right to make a perfect, neat fold. 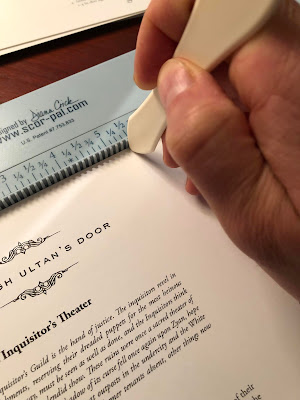 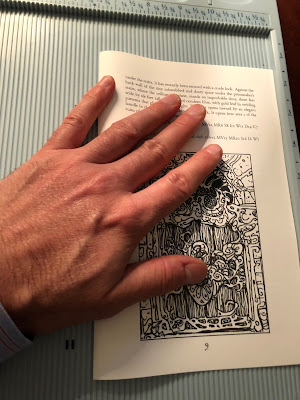 If you score it heavily enough, it'll fold immediately over into a perfect fold. But that might damage the paper and cardstock, so I use a second tool to flatten the page. Jarret Crader recommended this next amazing device to me, a Cosmos 4-inch Rubber Brayer Roller. It's a little roller that does the job very quickly and neatly by running it along the front of the spine of the paper like so. 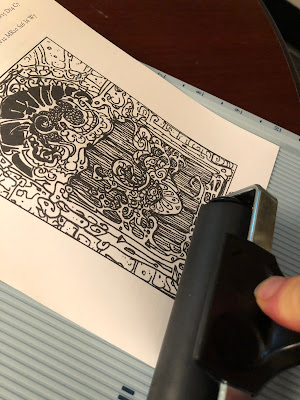 I do this process for the cover and every page of the zine, stacking up the finished pages until I have a complete booklet. Next comes stapling. I tried two techniques. Many folks recommended the Bostitch booklet stapler to me. 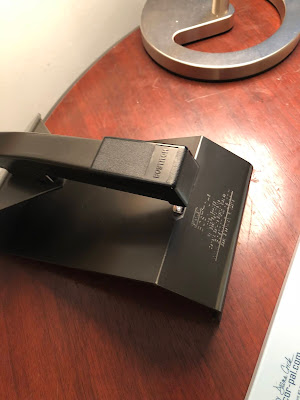 But I found it really hard to use so as to get a perfect staple right on the crease of the spine. This matters, because if it's not on the spine, then the pages of the zine don't turn properly towards either the front or the back. The technique I hit upon instead uses the more traditional longarm stapler. I'm using the Swingline model. It comes with a ruler and a guide. I calibrate the ruler precisely to the right distance and then line the zine up with the Score Pad as a rail to keep it straight. After stapling the top, I just rotate the zine and do the bottom. Although it's not 100% fool proof, I've found it works pretty well to deliver almost perfect staples even for someone clumsy like me. 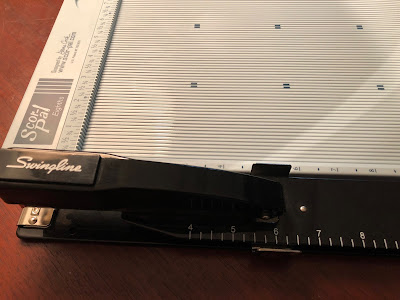 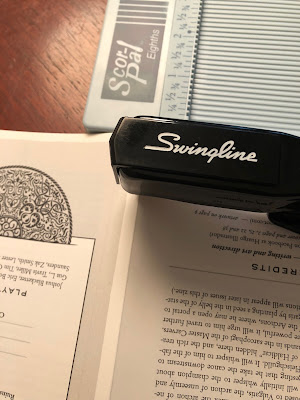 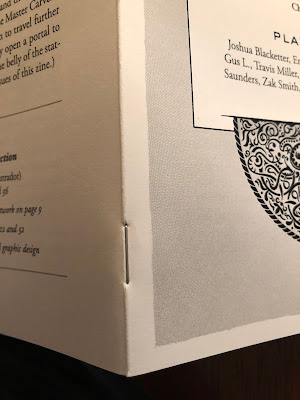 The next step, which Jacob Hurst recommended to me, is to press the zines down under a weight in order to get the whole thing compressed into a really neat looking zine. His recommendation was putting fives zines, alternating front and back, between two pieces of cardboard, and then putting a cinder block on top of that. Since I'm an academic I don't have any cinderblocks, but I do have some excessively heavy books. 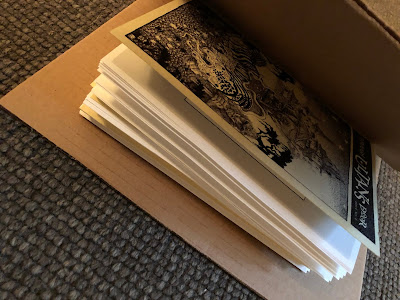 Once you have your neatly pressed zines, the next and final step is to trim them. When you fold a whole bunch of paper over, the thickness of each sheet pushes the next sheet forward, so that the sheets closer to the middle stick out. This is not very neat or pretty looking. 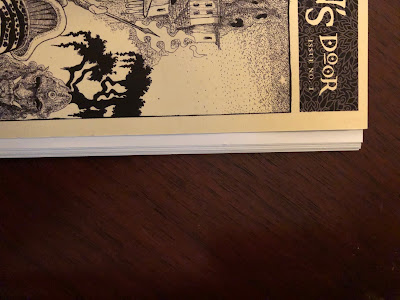 So the final step, at least for perfectionist is to trim the zine. First it's worth saying that not everyone trims their zines. If you're cool with a ragged edge that screams DIY, that's great, you're done. But if not, and you want that neat trimmed edge, things might get complicated. Most affordable paper trimmers are not capable of handling the thickness of your zine.
Issues 1 & 2 of Through Ultan's Door were each 36 interior page zines (big but not so big), that's 9 sheets doubled over, for a total of 18 sheets you have to trim through. That's a lot of sheets to shear clean through without error. And it's even worse if you're using a heavier paper weight, like I am. Most cheap paper guillotine trimmers can handle 15 sheets. So you would have either really force it, leaving a bit of a ragged edge, or trim half of the zine at a time, which may leave it looking uneven. Another thing you should know is that you really need to get a trimmer that has a clamp to hold the zine steady, or you might get an uneven cut.
You can get a heavy duty paper trimmer with a clamp for around $110. That means that for a lot folks on a lower budget, trimming might end up being too pricey. One solution is that even if you print at home I've heard you can bring your zines to a print shop and have them trim them for you, so you might want to look into doing that.

Since I'm planning on doing this for a long while, following Gabor Lux's suggestion, my major capital investment was a very fancy paper trimmer. So meet the Terminator of office trimmers, the Dahle 564 Paper Guillotine, capable of handling 40 sheets, with a handy clamp. It even has a laser to show you exactly where you'll be cutting. 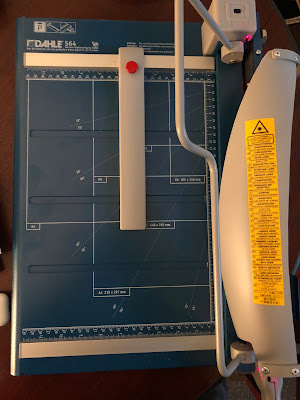 Here it is in action. Did I mention it has a laser? 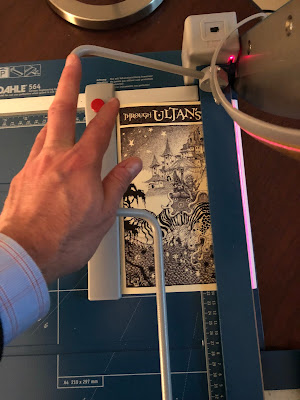 Be careful when you use a paper guillotine. The pricey ones all come with guards, but it's still very easy to cut yourself on them. And for goodness sakes, don't leave it where a child could get at it. Here's a before and after on the trimming. It makes a big difference. 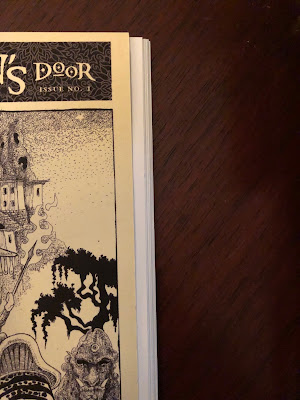 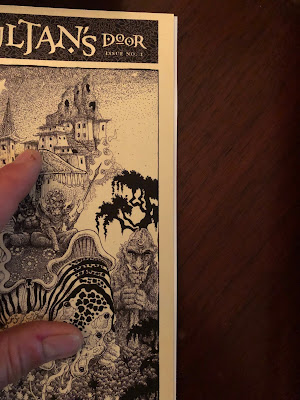 And here's a pic of the finished product. It shows the map on the interior cover, the key, and the encounter card (propped up) all in action. 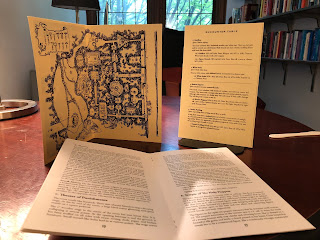 Now I just need to make 200 or so of these things. Not counting the time spent in the press when yo can be folding other zines, it takes me 4 minutes and 7 seconds to assemble each zine. With about another minute to stuff and hand-label the envelope, that's roughly 5 minutes a zine. So I guess that's 16.5 hours of zine assembly. See you guys in a couple of weeks.
Posted by Ben L. at 1:42 PM

Labels: So You Want to Make a Zine?, the Hobby, Through Ultan's Door, Zines