The Road of Lost Tombs 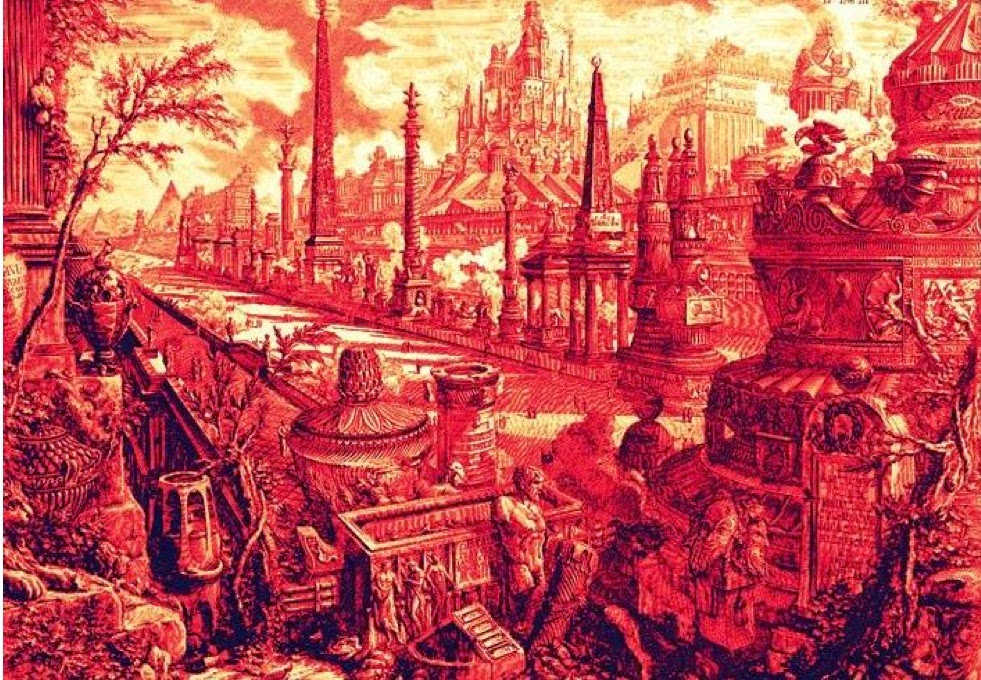 The Road of Lost Tombs is a free adventure by Gus L. of the Dungeon of Signs blog. He is a prodigious creator, with over 12 free adventures available here. The module is inspired by Piranesi’s etchings of the Via Appia. These etchings represent the Via Appia as a phantasmagoria of cluttered and incongruous monuments and tombs. In the adventure, the road once was the major trade route connecting the Capital with outer provinces. Later it became the pilgrim’s way to the religious centers of the Empire. Now, having lost this function as well, it is an ancient road leading nowhere. But throughout its history it has served as burial grounds, accumulating the surreal pastiche of tombs and monuments depicted in its source material. The great achievement of the module is that in 42 pages Gus L. channels these etchings into something strange and wonderful that could serve as the centerpiece of an entire campaign.

The hook for the adventure is a familiar one. People have been disappearing from the Road of Lost Tombs. Until the troubles began, it served as the primary smuggling route along into the city. Hints suggest that it has something to do with the Red Massif, the tomb of an ancient sorcerer general and his slaves that lies 20 miles down the road. In the few miles just beyond the city walls the Road of Lost Tombs is a red light district. Beyond the reach of the law, its abandoned mausoleums and catacombs have been converted into whorehouses, black-market bazaars, and sword schools where ex-gladiators teach the finer points of bloodletting. The module includes a rich set of rumor tables about the trouble on the road.  They have separate entries for the bearer of the rumor and the rumor itself. This allows the society of the red light district comes to life by introducing a fine cast characters. There are some wonderful touches, including a guild of tomb robbers who are marked by the stone mask they must wear in public, and an ex-gladiator who sips water painfully through a grill that has been bolted to his head. In short, the red light district is the sort of place where adventuring scum should feel right at home—the seedbed of a thousand lawless adventure.

Further out, the road becomes a forlorn and dangerous place. The adventure provides a brief encounter table (d6) for the road that is evocative but a little thin. For the adventure, this is not a problem, since the trip to the Red Massif will take the PCs only a few hours on horseback, or a day on foot. The table includes the unquiet dead, and also a neat reimagining of owlbears as arcanovors who feast on magical trinkets scrounged from graves. I love the idea of owlbears as scavengers among the tombs, but was itching for a grottier version. If I were going to run this, I would probably treat them as filthy beasts, drinking putrid flesh, cracking dried bones, and rutting and rolling in the dust of tombs.

The destination of their travels, the Red Massif itself is an enormous cube of red stone, pulled from the rock below through the sorcerer general’s puissant art. Gus L. provides a gorgeous map. (Even if you don’t want the adventure, you should download this map. Just staring at it for 5 minutes will give you all kinds of ideas.) Gus L.’s maps are among my favorites, up there with Benoist Poire’s rare achievements. The massif has four locations: the Necromancer’s Repose, The Court of the Robber’s Bride, The Chambers of the Sleeping God, and the Feast Halls.  Each of the locations is well crafted. 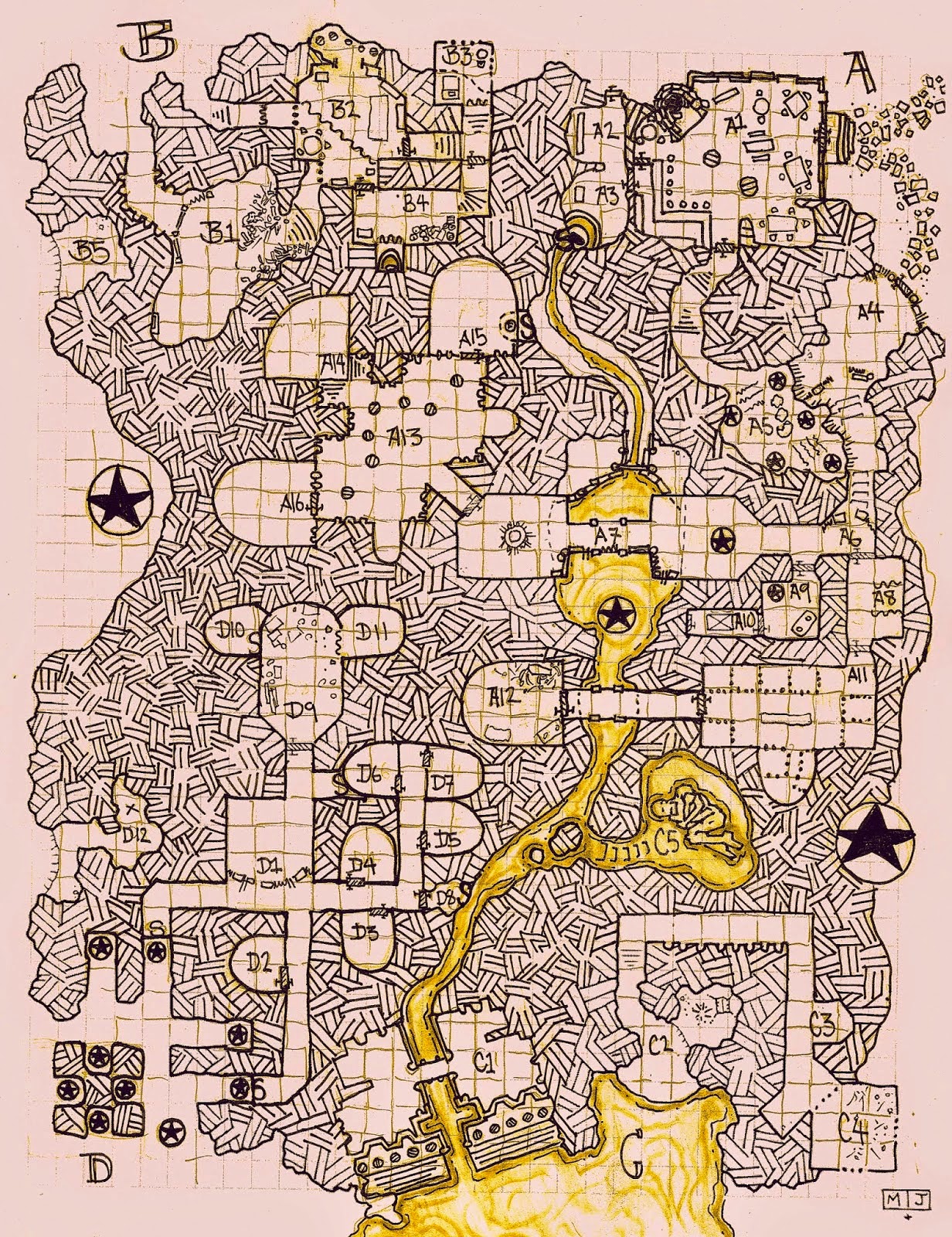 The necromancer’s former abode is pleasantly quirky and low-key. (He was no great shakes, being primarily a re-animator of horses.) It is the sole location not connected to the others. The Chambers of the Slumbering God is delightful. The God in question is a yazata, a war titan, the greatest servitor and siege weapon of the sorcerer general. He lies curled up, his slumbering body taking up an entire cave through which the underground river on the map passes. His empyrean dreams of the Celestial Thrones have poisoned his resting place, and woe to those who manage to awaken him!

The main action comes with the other two locations. The Feast Halls is the home to the Order of the Golden Feast, a truly hideous cult that has set up an inn in the massif to lure travelers into their clutches. The Order is a formidable adversary and the descriptions of their depredations are not for the faint of heart. They are highly organized with packs of paralysis inducing ghouls on leashes and eerie cursed hounds whose baying can be heard only at a distance owing to the ring of silence they radiate. The Feasters have some high level villains among them, and the Golden Ones—“elevated” Feasters who have become beast men perpetually in the frenzy of the hunt. Everything about them is deliciously awful. The Court of the Robber Bride is home to the other faction in the massif, the Dust Family. This scrappy band of brigands has its hideout in secret chambers of the massif. Outgunned, they are conducting a guerrilla war against the Feaster. They are led by Sister Dust, a Robber Bride—a human possessed by the avatar of a goddess of lawless thievery and social rebellion. The Robber Bride is a fascinating and capable character who will try to play the PCs against the Feasters through ruses and misdirection. (One small thing that mars this otherwise delightful locale in the massif are the names of the “Dust Family--“Chancibel Dust”, “Donald Dust”, “Morely Dust”, etc.--which seemed more at home in a Boot Hill adventure than in the twilight of the Roman Empire setting of the Road of Tombs.)

This factional struggle at the heart of the Red Massif is masterfully designed. The PCs are walking into a situation that is like a tightly coiled spring. Depending on how they interact with the Feasters, they may be ambushed immediately, or may take up residence of the inn to be used against the Dust Family, or be poisoned by the evening’s meal. Or perhaps they will have an initial skirmish at the Inn, only to be approached by the Dust Family when they camp somewhere outside the Red Massif. There’s no saying how it will play out—it might go a dozen different ways in a dozen different games. The Red Massif is open-ended, presenting formidable challenges, capable and interesting factions, and numerous tactical possibilities to players who are good at this kind of thing.

I have one only one criticism of the Red Massif itself. The map, although excellent in every other way, represents the Red Massif as very small. As a result the factions are practically on top of one another. For me, this stretched my credulity a bit. The PCs could walk out the door of the inn, walk around the corner of the massif, and find the rather obvious secret door concealing the Court of the Robber Bride in 10 minutes. Similarly, somehow the Feasters have never explored the Necromancer’s Repose, supposedly because there are some skulls enchanted with a magic mouth that scare them away. (The Feasters have at their disposal an 8th level cleric, a 5th level fighter who can’t be killed by natural means, packs of ghouls, etc.) Now there is a long tradition of dungeon design in D&D with factions in implausibly close proximity to one another. This might even be said to belong to the genre, so it won’t bother some people. But I have an easy fix for those it does. Just look at the Piranesi etching that Gus L. presents of the Red Massif. 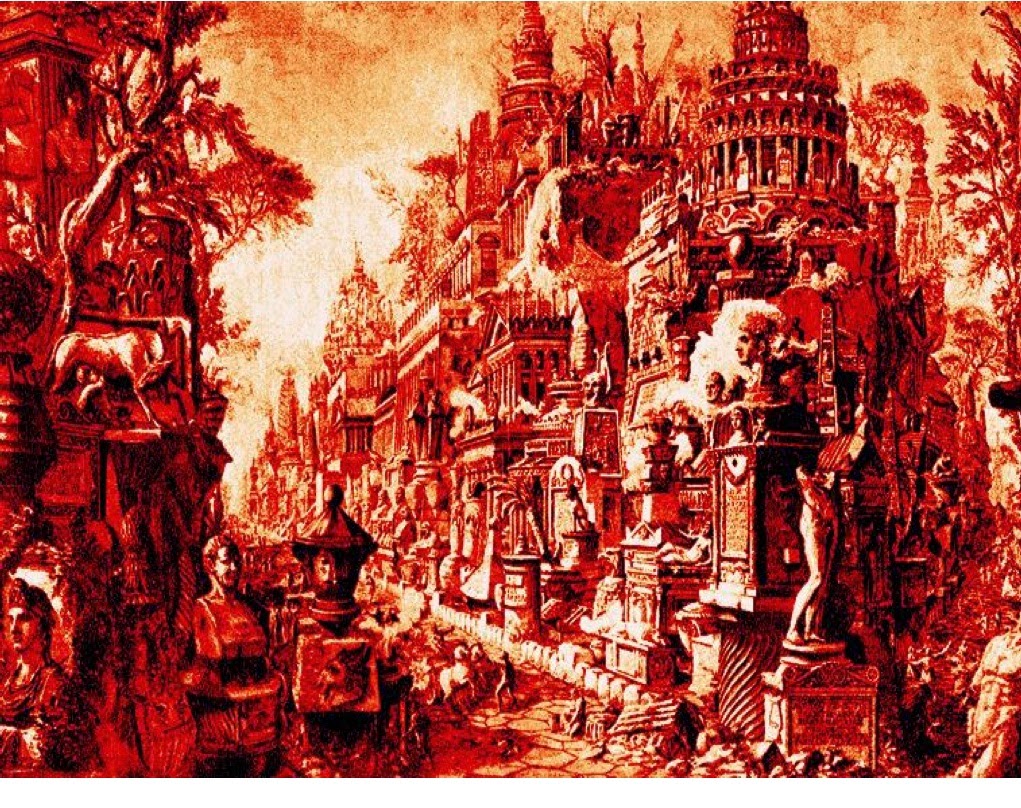 If I were to run this module, I would present the Red Massif as gargantuan. Each side of the Massif is very long, much longer than on the map, and jammed packed with monuments and statues. Numerous arches lead to tiny courtyards, and dizzying steps lead up to tiny nooks, or to faux doors carved into stone. In that sort of riot of architectural over-design, the Red Massif would be a challenge to explore, and the factional co-existence would be more probable. I would probably cook up a d20 chart to cover exploration of a side of the massif in a pinch with entries like this:

The best thing about this module, however, is not the Red Massif, or not the Massif alone. It’s the way in which the module left me wanting more; not to be given more, but to make it. Reading the module, I found myself with a keen appetite for cooking up a long and narrow hex crawl following the Road of Tombs and its environs for 100 miles or so outside the Capital. It would be replete with catacombs and barrow mounds, some repurposed as smuggler’s dens and others home to the disturbed and unquiet dead; with tombs of the ancients still sealed by their wards and defenses; with reclusive orders of tomb dwelling penitents, or colonies of lepers; with hags and necromancers; with shrines and temples to strange and forgotten gods; and everywhere, the owlbears rutting and feasting. Of course, for this sort of thing you would need an encounter table with 20 or 100 entries on it, perhaps divided by the regions through which the road passes. But this would be a delight to concoct; it feels like it would practically write itself. Maybe I should do it.
Posted by Ben L. at 1:20 PM 2 comments: