Jorune: Evolutions uses a stat and skill check system that is different than the mechanics used in combat. Since Jorune: Evolutions is OD&D inspired, in another post I tried out a unified mechanic that employs the 1d6 that OD&D uses for most things. It was simple and the math was very transparent in a player-facing way. It also had a certain cleanness to it in that progression is linear and even a +1 opens up the ability to meet challenge levels that were previously closed.

A possible downside is that it makes those low modifiers very significant, especially when it comes to opposed rolls where having an advantage can lead to stacked modifiers. This would have been OK, except for the fact that I'm using opposed rolls for grappling in unarmed combat and giving a +1 modifier for being large sized. (My next post will explain.) This would have resulted in each group having at least one unarmed boccord specialist in it, i.e. a half-giant professional wrestler. That game sounds amazing, but it's not the game I'm trying to design.

The other possibility, with which I originally started, was to use a 2d6 system. This fits with the reaction roll mechanic and downtime system I'm using. Also, as Alistair mentioned in the comments on the 1d6 skills post, classic Traveller used a (janky) 2d6 skill system, so it has a nice pedigree for old school sci-fi gaming. That it picks up the PbtA resonance is a welcome result for me, and Cepheus system games use it as well. If you put a chart--like the one below--that shows the probabilities of success as a percentage chance on the character sheet, then you can make the math transparent enough to the players I hope. And as Tom Killion mentioned, it's fun and more dramatic feeling to roll more dice than one. 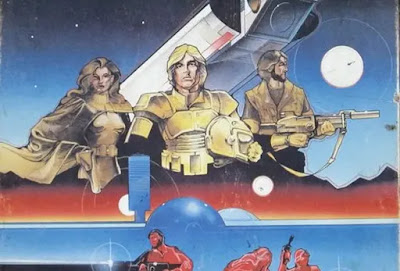 There are four kinds of stat and skill checks in Jorune Evolutions. A roll can be opposed or unopposed. Each of these kinds of rolls can be a straight roll or a mixed roll. The Sholari will tell the player which of these types the roll is, and what modifiers will apply, before the player decides to roll the dice.

Unopposed checks are tests against the PC’s skills or stats where the only opposition are the circumstances of action, inanimate objects, or natural forces. Opposed checks are made when the PC is attempting something that is resisted by another sentient being.

Straight rolls are rolls with binary results: success or failure. (Almost all rolls in classic D&D are straight rolls, with the exception of reaction rolls.) Mixed rolls are made in circumstances where the effect of success is uncertain and feels narratively like it should be a scale of possible outcomes. Since Jorune Evolutions takes inspiration from classic D&D, straight rolls are the default. 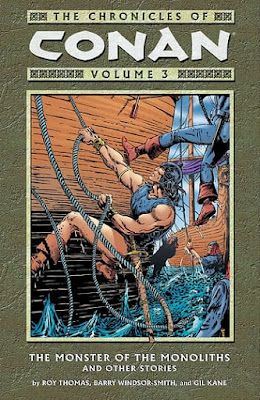 Roll 2d6 + stat or skill modifier + difficulty modifier. (Note: it is always a stat OR a skill check. The modifiers do not stack.)

A penalty of -4 or worse is an automatic failure. This caps absurd attempted rolls. 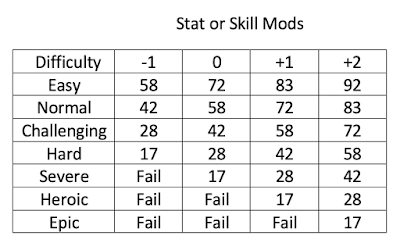 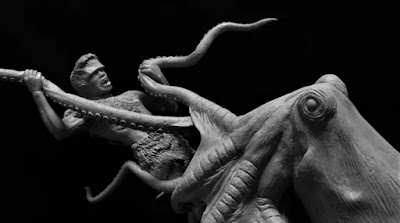 To make an opposed check, each party roll 2d6 + advantage modifier + stat or skill modifier. The advantage modifier is applied only to the party whose situation is more advantageous. In a straight opposed roll, whoever gets the higher total number prevails. In a mixed roll, consult the winner’s roll to see whether it is a mixed result or a success. A tie always results in a temporary stalemate. (Check again next round.)

If the difference between the modifiers of the two sides is 4 or greater, the side with the higher modifier automatically wins.

Well, the Kickstarter for Through Ultan's Door 3 is off to a strong start. While of course I owe the greatest debt of gratitude to people who purchased the early issues and expressed the enthusiasm in the past that's kept me going, one of the things that makes me the happiest is that about half of all pledges are from people who are picking up the back issues as well, i.e. people who have never experienced (at least the print versions of) Through Ultan's Door. We have blown through a huge number of stretch goals. I wanted to tell you a little bit about what's to come. So far we've unlocked three sets of stretch goals that I'm super-excited about.

Through Ultan's Door 3 presents a rules-light system for maladies and afflictions that includes ways of tracking the progress of a malady and its mechanical and narratival effects. In the zine I present six exquisite maladies and afflictions of Zyan, from furniture pox to shadow blight. The first set of stretch goals will produce an illustrated, folded pamphlet (also PDF) with the full Through Ultan's Door house dressing and printed on French Paper Co. paper. It doubles the number of afflictions covered in the zine from 6 to 12. Although this is subject to change if more ideas occur to me, right now the additional afflictions include: onoma ague, penury blindness, spin worms, ruinous anomie, tempest catalepsy, and speculo obsession. The good news is that I already have this 2/3 written since some of these were cut from the original zine for reasons of space.

#2 Increasing the Pay of Artists and Graphic Designers

For the second set of stretch, I am increasing the pay of all seven artists and the graphic designer for this project.

I expect that this will be the stretch goal people backers are most excited about. Through Ultan's Door 3 presents a sewer crawl that connections the dungeons of issues 1 and 2 with 7 other locations. For the third set of stretch goals, which just funded, I am collaborating with Gus to create an 8th sewer location in the form of a one-page dungeon. He will do the cartography and layout, and collaborate on the keying of this location, which we dreamed up together. It will be printed on French Paper Co. paper and included in all print copy pledge levels (also as a PDF). I want to share the capsule write-up of the location, which I jsut finished:

In Zyan, confectionery jostles poetry and opera for the title of highest art. From the tumblers and molds, the sugar torches and glazing racks of the candy works, pour traditional favorites, from elegant drop candies in flavors of horeshound or lilac brandy, to candied orchis, or the jellied meats in Zyanese delights, and rosewindows of stained sugar glass. The Sweet Works was an underground workshop that once poured its sugared waste into the sewer river. Its sunken garden provided the narcotic white honey for their once famous cough drops. Long abandoned, the garden has grown wild among the ruined works, drawing to it honey ghuls from Zyan, where gangs deal white honey to addicts. Having lost the manners and customs of humanity, the honey ghuls are now jealous slaves to the hive.

But the truth is that I'm just as excited about what comes next--if we manage to unlock the next set of stretch goals. The next set presents an alternate frame for a mini-series or campaign set in Wishery. Instead of traveling through Ultan's door, the party receives an inheritance from a former dreamer that includes the recipe for potions of penumbral transmigration. These potions allow them to use the memories of the dead dreamer to fashion priaducts that take them through the Oneiric Sea to different locations in Wishery.
If this set of stretch goals are unlocked, this will be only the beginning. For the last stretch goal (at present, more may be added) involves a commitment to work on a new, episodically released, zine called Pale Echoes. It takes its name from the term that the Zyanese use for the drab waking world, which they call derisively "Pale Echo".
Pale Echoes will be a zine taking you the other way through Ultan's door to explore different campaign frames and premises for the waking world of your game. In addition to numerous different "campaign starters" and house rules that will connect Pale Echo with Wishery, I hope in its pages to present the waking world from own home campaign, i.e. the city-state of Rastingdrung, where Ultan's door first appeared in my own campaign.
To be clear, even if we hit this stretch goal, this zine will not be included in the Kickstarter. This is rather a long-term commitment I will make, on the basis of the interest expressed in the Kickstarter, to launch this zine in the future.
So if you're thinking about jumping on board the Kickstarter, now is a good time! You can find it here.  Feel free to share it with those you think might find it interesting. If we continue blowing through these stretch goals, who knows what else might lie beyond the veil of sleep!
Posted by Ben L. at 9:53 AM 4 comments: