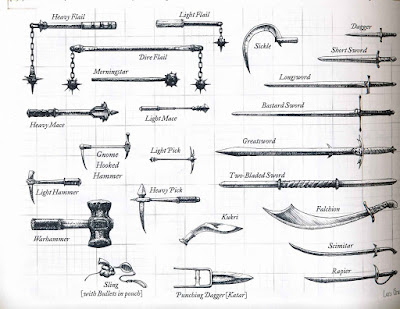 This post is about how you can combine the flat 1d6 damage of all weapon types in OD&D with some flavor for different weapons. Furthermore, it's about how you can do this in a classless system where there is no fighter class. It's a genuinely novel system, I think. It's also the next post in my series on character generation in my OD&D inspired hack of Skyrealms of Jorune. I talked about race and stats here, and in my last post I discussed the classless "point buy" system of skills.

Any player may use any weapon or wear any armor in Jorune: Evolutions. As an OD&D hack, all weapons do a flat 1d6 damage. To differentiate weapons, I have taken an idea that I have seen best worked out in Gus' HMS Apollyon ruleset. The way weapons are differentiated is by having one or more tags that comes with a special benefit. I combined Gus' idea (and a lot of his details) with my skill system by saying that weapon proficiencies unlock the benefit of weapons with that tag. Those without the proficiency can use the weapon, but without the benefit of the tag. Note that the differentiation by tags and the different classes of armor also allowed me to introduce a little bit of the flavor of weapon vs. AC from AD&D but in a MUCH simpler form.

Ordinary weapons have only one tag, but special weapons can have multiple tags. These would normally be a unique splendid item that a player had commissioned and crafted by a master artisan as a downtime action. This is probably the closest to magical weapons you'll get in this game. When wielding such a multi-tag weapon, you receive the benefit for each tag in which you are proficient. Such unique weapons allow a skilled warrior to double-dip on benefits provided by multiple types.

Armor proficiencies work a little differently, giving you a slightly better armor class when wearing that class of armor and allowing you to use a slightly higher agility modifier. Special armors can also be commissioned by artisans. Some armor can be made to absorb a limited amount of isho, by studding it with special crystals, or by using the shell of the locure, a grey giant beast with a shining shell like an armadillo. The most legendary armor of all is Thailarian Platemail, hard as steel but light and translucent, made from the thailer (breastbone) of the dhar corundon, the apex predator of jorune.

One of the primary ways to advance in fighting skills is to learn more weapon and armor proficiencies through downtime actions. I envision fighting-type characters as carrying multiple weapons for different situations or different sorts of missions, and advancing further by finding or having crafted weapons crafted that bear multiple tags or other special properties. I have included a weapons and armor equipment list at the end of this post to show you how this might be applied.
Note: this is a different approach to advancing in fighting arts than I presented here, since everything goes through weapon-types rather than general fighting styles. But it's similar in spirit in its emphasis on learning discrete skills and its a la carte approach to improving in combat. 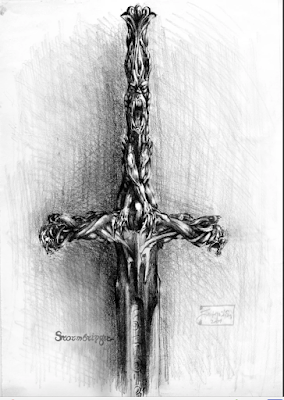 Those who wear armor without proficiency reduce their AC and max agility modifier by 1.

Light Armor
Those with proficiency receive AC 13 and a max Agility Modifier +2. Note that most tough animal hides count as light armor.

Note: thick animal hides count as light armor. Among human-derived races, the use of medium and heavy armor is rare, because metal is rarer on Jorune, and so very expensive. Who knows what kind of Earth-Tec armor may exist out there somewhere... 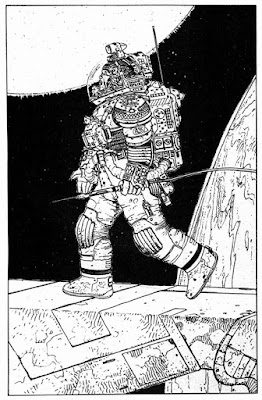 Crushing
+3 to strike moderately or heavily armored foes. Crushing weapons are two handed and may not be used with a shield.

Reach
Strike from the second rank and set against charges (double damage). Weapons with reach are two-handed and may not be used with a shield.

Close
Has disadvantage on damage rolls (with or without proficiency), but automatically does damage every round while grappling

Silencing
Like a close weapon, but can only be used in grappling. On a successful grapple, opponent is silenced

Thrown
Can also be used in ranged attacks

Whipping
Disarm foe on a natural 19-20

Stunning
Stun foe for one round on a natural 20

Overpowering
If you kill someone with a melee attack, you may roll a bonus attack against a single adjacent foe
Heavy
Receive advantage to damage rolls. Heavy weapons are two-handed and may not be used with a shield. They also incur an initiative penalty. If you're using team-based initiative, the wielder of a heavy weapon always goes as though their side lost initiative. (If you're using segment initiative treat the attack as taking 2 segments instead of 1.)
Vibro
Dream on. You cannot begin with a skill in Earth-Tec melee weapon types, since you are not drenn. 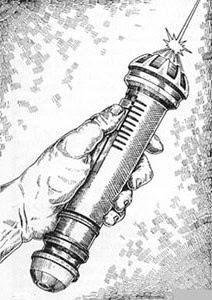 Rapid
This missile weapon has a rate of fire of 2 shots per round, provided you take a full action to concentrate solely on shooting

Devastating
This missile weapon gets +3 to hit unarmored foes

Piercing
This missile weapon gets +3 to hit lightly armored foes

Sniping
If you spend a round aiming, on the next round, this missile weapon gets +3 to hit against any foe

Beam, Pulsar, Field Ram, etc.
Dream on. You cannot begin with a skill in Earth-Tec missile weapon types, since you are not drenn.


Keep in mind that metal weapons and armor are expensive on Jorune as metal is significantly rarer than on Earth. Again, keep in mind that players may find weapons with multiple tags (or new tags) or have them crafted for them. Unlike in ordinary D&D where there is nothing to buy after the early game, in Jorune: Evolutions there are many options to pursue.


Note 1: The values listed are for those proficient in the armor type. For those not proficient AC and Max Agility Modifier are each one lower.

Note 2: I'm not sure about the "Silencing" tag for weapons. Part of me thinks it's too specific for this system. Another part of me thinks it might be fun to let funky weapon types proliferate.
Posted by Ben L. at 5:38 AM