A Simple d6 System for Stat or Skill Checks

Jorune: Evolutions uses a stat and skill check system that is different than the mechanics used in combat. Since Jorune: Evolutions is OD&D inspired, the unified mechanic employs the 1dd6 that OD&D uses for most things.  Why did I come up with a new system that unifies skills and stat checks?

In Jorune: Evolutions, stat and skill checks are informed gambles that players can take in high-stakes situations.
There are two kinds of stat and skill checks in Jorune Evolutions. A roll can be opposed or unopposed. The Sholari will tell you which of these types the roll is, and what modifiers will apply, before you decide to roll the dice.

Stat and skill modifiers represent how good you are at the relevant task. For more on this check out my rules for character generation here and my skill rules here. For a reminder, stat modifiers work like this:
-1 Subpar
+0 Average
+1 Excellent
+2 Supreme (You can only reach these heights through big ticket sandbox advancement)

Generally speaking, the difficulty of the check tells you the number you must roll to succeed using 1d6 + your stat or skill modifier.

To set the difficulty level for an opposed check, the Sholari looks at the circumstances of action and what is being attempted by the player, and assigns a difficulty level to it. The player then rolls 1d6 + skill or stat modifier, and must roll equal to or over the number set by that level of difficulty.
Here is some guidance for the Sholari in assigning difficulty levels, which is more an art than a science.
Easy: An average person can do something easy reliably. Even someone untrained or subpar can do easy things more often than not.
Normal: An average person can do something of normal difficulty more often than not. For someone untrained or subpar, a task of normal difficulty is a toss-up.
Challenging: For an average person, something is challenging is a toss-up. Someone untrained or subpar will fail at a task that is challenging more often than not.
Hard: An average person will tend to fail at a hard task more often than not. For someone skilled or excellent, a hard task is a toss-up.
Severe: Someone skilled or excellent will fail at a severely difficult task more than they will succeed. For a master or supremely talented person a severely difficult task is a toss-up.
Heroic: Something is heroic if the average person can't do it at all. You have to be skilled or excellent even to have a prayer. Even masters or supremely talented people fail more often than not at heroic tasks.
Epic: Something is epic if even a skilled or talented person can't do it at all. Only a master or legendarily talented person even has a prayer. This is the most difficult check possible.
If it helps to visualize it, here are the probabilities for someone with each stat or skill modifier to succeed at each category of difficulty: 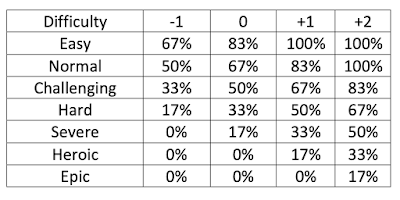 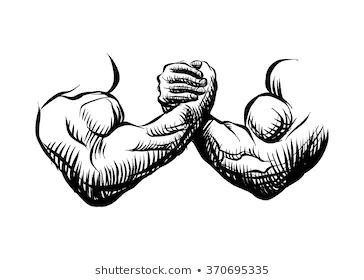 When you are doing an opposed check, only the player character rolls. Jorune: Evolutions is a cooperative game so players do not normally oppose one another. However, in the rare event that two player characters are involved in an opposed check, the underdog makes the roll.
The difficulty of the check is set by the stat or skill of the opponent. Consult this table to set the level of difficulty for the roll. Note that the numbers go above +2 because there are certain kinds of checks where modifiers from different stats or skills are added. The higher ranks can also represent super human levels of skill or power associated with alien beings or mechanical monstrosities.

Except for the reaction roll, OD&D does not produce tension and drama through "mixed results" or "partial successes". Mostly this works fine, but there is something lost by being forced into a binary.
Without modifying this system at all, the Sholari can sometimes build in "mixed results", by substituting a mixed result for a failure. For example, the Sholari might inform the player that a failed roll will involve success at the task but with a complication, e.g., "On a failure, you'll get the door off the hinges, but you won't do it quickly enough to avoid your pursuers."
But here's a way to tweak the system to include fully mixed results mechanically in the system.
Mixed Result Protocol: When you just hit the target number you need, the result is mixed or partial success. For example, if you are making a roll of challenging difficulty, you will get a partial success if your roll, after applying modifiers, is exactly 4. A 5+ counts as a full success.
Remember, if you are employing mixed results, the Sholari should tell the player what effect a failure, success, and mixed result will produce before the decision to roll is made.
________________________________________________
In the remainder of this post, I want to compare this method of stat and skill checks to some other popular methods you might be familiar with. Because this comparison is just math, it's going to be very dry. If that sounds terrible to you, stop reading now.

I have been using the Hill Cantons method of rolling stat checks for years. This involves rolling equal to or under your stat with a different number of d6 dice depending on difficulty. Normally the range is from 3d6 to 6d6. But to capture the same number of categories, you could theoretically extended it down to 2d6 and up to 8d6. The comparison of difficulty levels with Jorune: Evolutions would then look like this:

I want to compare do a selective comparison with Jorune: Evolutions. In these comparisons, the stat listed is first the Hill Cantons numerical value and then the corresponding Jorune: Evolutions modifier. I've included a stat of 20 to capture the possibility of getting a +2 modifier in Jorune: Evolutions through big ticket advancement or downtime actions. I'll just compare the probability of making unopposed checks of normal to hard difficulty levels.

What this comparison show is that your ability score is incredibly important on the Hill Cantons ways of doing it. Someone with a stat of 3 will make the a normal level of check less than 1% of the time (!), whereas someone with a 18 will make it 100% of the time. That's basically a full 100% spread. Again for a challenging roll (4d6) the bottom is 0% and the top is 97%. This is a steep curve where your initial stat rolls are overwhelmingly important. (It flattens a bit when you get up to a severe challenge (6d6), where the spread drops to 45%.)
The spread for Jorune: Evolutions is half that for the normal-hard range of difficulty, staying at a steady 50%. (If you drop the +2, the starting spread is only 33%.) Someone who rolls a 3 on their starting stat still has a 33% of doing something challenging and a 17% chance of doing something hard in Jorune: Evolutions. In keeping with OD&D de-emphasizing of the significance of starting stats, the Jorune: Evolutions way of doing is a much flatter curve, with a smaller spread between the top and the bottom.
In an OD&D inspired game where I don't really want your stats to define you so strongly, I find this a better approach to stat and skill checks. The Hill Cantons method also disincentivizes savvy players with low stats from ever trying anything that uses that stat. This seems counter to the spirit of retro-game play. 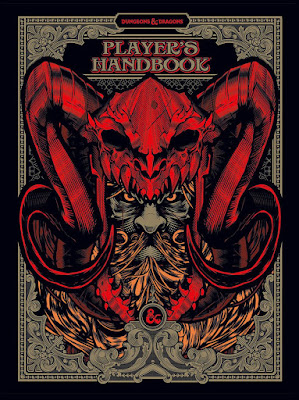 5E is harder to compare, because, like Mothership, it stacks skill and attribute modifiers, furthermore it does so in a way that's sensitive to level. It also tracks not only difficulty but situational advantage or disadvantage. But I'm going to try to compare anyway: keep in mind that the comparison has limited utility given how different the underlying systems are.
I'll ignore advantage and disadvantage and put in parentheses the higher value for skill modifiers for characters 1-4. In 5E people's stats climb higher, and the greater difficulty levels are pegged to checks for dragons and demigods. So I'm going to handle this by equating the 5E difficulty categories in this way 5E "easy"= J:E "normal". Here as in the comparison with Hill Cantons, I'll just focus on the four difficulty categories of Normal, Challenging, Hard, and Severe.
Normal (5E DC 5 vs. J:E 3+) 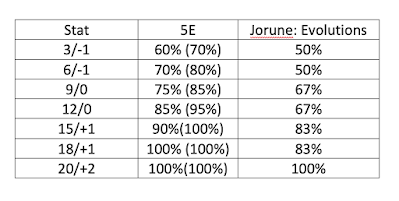 The 5E checks are linear, but Jorune: Evolutions are chunkier. But there's almost the same spread between top and bottom in the lower difficulty levels, with 40% in 5E, and 50% for J:E. If you eliminate the big bump for +2 in J:E the two are almost the same. My hunch is that on balance 5E is probably not that different from Jorune:Evolutions, except there's a LOT more to track. Probably the biggest difference in play, besides the fiddly 5E book-keeping, is that in Jorune: Evolutions the Sholari will need to fold situational advantage into the initial difficulty modifier, whereas 5E has a separate mechanic for advantage and disadvantage.
Another thing to note is that when we get into higher difficulty levels than I compared, 5E starts to get weird in the beginning stat range. That's because 5E has to make room for high-level characters with high proficiency bonuses and jacked out stats, and even worse, strength checks by ancient red dragons and intelligence checks by archdevils. So the upper levels of difficulty are out of reach for starting players. In Jorune: Evolutions, things are built on a more human scale.
Some Take Aways
One take away from these comparisons is that Jorune: Evolutions de-emphasizes the importance of starting stats. I like this because it fits the OD&D vibe, and also because it encourages all players to take chances, i.e. not to think, "My guy can't do that." Another take away is that looking at the comparison with 5E where I included a +2 modifier, we can see how powerful a +2 for a stat or skill will be in Jorune: Evolutions. At the hardest level of difficulty (Epic), someone who has mastered a skill or who has a superior stat will have a whopping 17% chance of success. This just shows that those should be very hard modifiers to attain in the game. Design your sandboxes and downtime rules accordingly! And as a DM be very careful about ever allowing modifiers to stack past +2: this can easily break the game. 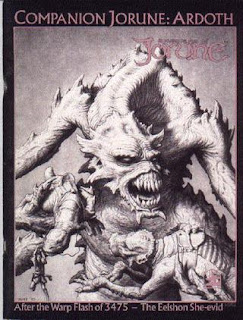