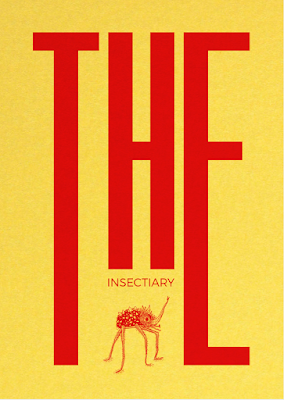 The Insectiary is a zine written mainly by Andre Navoa, with smaller written contributions by Andre Tavares, artwork by Pipo Kimkiduk, and layout by Lina and Nando. It was produced as part of Zinequest II, where I heard about it. The system neutral zine presents 16 nasty bugs to include in your ttrpg game.

The first, and most important, thing to say about the zine is that it is a beautiful object. It has unusual dimensions, being A6 rather than A5, and small and tall. It has a heavy cardstock cover and is printed on bright yellow paper in red ink, except for a single red page with yellow ink. Starting with the cover, there is a stretched out feeling to the font use. It mixes different fonts, for a page by page, boutique feel, similar to the intentionally over-designed Mörk Borg aesthetic. Despite this, things are laid out clearly and with a consistent aesthetic and use of space. The layout looks good. Very good. Lina and Nando should be proud.

Let me mention a couple of neat layout tricks and information design that zinesters would do well to note. 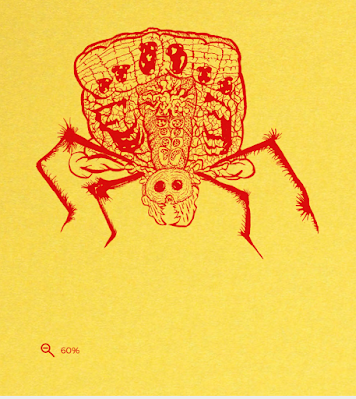 (1) The full-page illustrations of the insects come with a little magnifying glass that has a plus or minus in it, along with a percentage number. So -60% would mean that the bug is 60% smaller than the illustration, and +25% would mean that the bug is 25% bigger than the illustration depicted. This is a handy tool that immediately helps you to visualize the size. Obviously, this trick will only work for things that are consistently pretty small in size so that they bear an intuitive relation to the size of the illustration on the page, but HATS OFF in this context it works perfectly. (I could imagine it working for a bestiary of fairies or mushrooms, or butterflies, or whatever.)

(2) Interestingly, there are no descriptions for the bugs, since the zine offloads that to Kimkiduk's glorious illustrations of each insect, using supplemental random tables to provide colors and sounds. Each entry tells you the natural habitat and size of the insect (this is actually unnecessary given the magnifying glass), and focuses almost entirely on the bite effect. It also includes a humorous or horrible quote at the bottom that paints a little vignette for you. Again, designers should do well to note this trick of really leaning into the visual presentation to do work that text could do. If you are working with an amazing artist, why not consider letting the picture do the talking for you? This allows you to focus your energies elsewhere.

It is worth pausing here to emphasize how horribly delicious the illustrations of the bugs are. They remind me somehow of the best fiend folio illustrations. That they are produced in yellow on red somehow only adds to the awful beauty of the drawings. Kimkiduk has done a wonderful job. 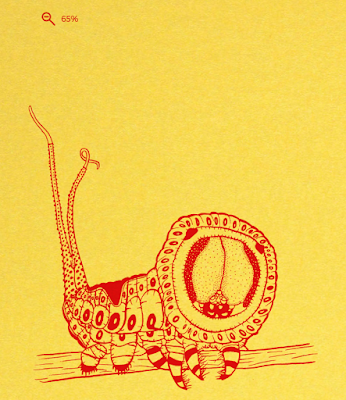 I have two minor gripes with the layout and information design, which I feel almost bad mentioning because the total package is so good aesthetically speaking and innovative with its information design. The first is that they chose to do a really great two-page spread illustration of insectoid horror on the interior of the cover. But the cover is stapled (attached) to the interior, which means you can't see the spread properly. As far as I can tell, the only two places where you can have a single unbroken illustration across two pages in a zine is either on the exterior of the front cover or on the center page of the zine. Or, if you have a detached cover, you can put it on the interior of the cover, as I do with my maps.

The second minor gripe is that the entries for the bugs do not tell you what color the bug is or what noise it makes. Instead you are sent to roll on three utilitarian but fairly insubstantial tables at the front. This works against the wonderful design aesthetic of the zine to have everything about a bug on the same two-page spread and adds nothing, since what's at stake is just describing aesthetics trivia of the bug ("wait a minute, flip, clatter, clatter, it's green with mottled fuchsia spots") and the tables are very short anyway. I think it would have been better information design if this was simply included in the description. The take-way for me with this is that you should think about whether having a random table adds something or just throws up a procedural obstacle to smooth play. Again not a big deal and the main thing to say is that this zine has brilliant information design.

The Definitely Could Have Been Better

But there is, from my point of view, a big problem with the zine. It comes out in the following text at the beginning, where Navoa writes:

"Insects are nasty little buggers that attack you during. your sleep or when you expect it the least. Or whenever the referee wants them to attack, just because you are being very annoying at the gaming table.

The Rules: Whenever the referee sees fit, they may ask one or more of their players to make an appropriate ability check or saving throw (whatever makes the most sense according tot eh rules system you are using) on behalf of their characters. In case of failure, the character is either stung or bitten_depending upon the insect type_and must endure the effects as detailed in the description of the insect. It is that simple."

Perhaps this is meant tongue in cheek, but it relates to a real problem with using the zine. In the real world, one is usually stung by an insect before one ever realizes it's there. And this seems to be part of what horrifies Navoa about insects. 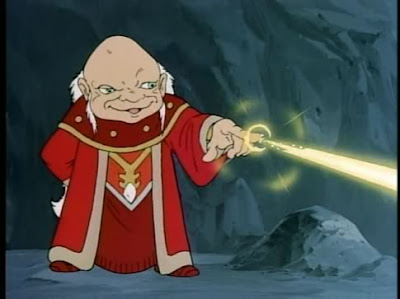 The problem is that, at least in retro-game play, it's not fun to have things happen to your character by DM fiat without any warning. It's all well and good to hazard dangers knowingly and have the worst happen, it's another entirely to have something come from nowhere and harm your character. The classic example would be a trap that was potential lethal (save or die!) but had no external warning signs. That's bad adventure design. Instead the players should either be given signs that there is a trap there, or the context should be such that they know that the place they're walking into is chock full of traps, and they better go cautiously.

Some of the bugs are utterly lethal: they paralyze you and eat your eyeballs, or kill you from sepsis, or deliver an electrical shock like a sword blow, or compel you to kill your next sexual partner (!), and so on. Others produce mainly humorous effects like smelling bad or itching. It's obviously worse if it's lethal, but it might understandably rub a player the wrong way to just have even the less bad things happen to their character out of the blue.

The advice about when to inflict this sudden penalty on players, which is probably intended as a joke, is also bad. The DM should never do things to players because they annoy them. That sounds like a dysfunctional power trip to me, and also pushes against the model that I enjoy most in retro-gaming play, where the DM is a fair arbitrator, who is certainly rooting for the players, but without allowing that to influence the challenge based fair play that is scrupulously established and builds trust between player and DM.

Since the text of the zine focuses almost entirely on the bad thing that happens to you when the bug bites you, and since these are presented in the main just as bad things that happen out of the blue when something tiny without stats or even a description suddenly assaults you, it's not very usable at the table. As it turns out, the zine mainly consists of a series of gorgeous insect illustrations in a jaw-dropping layout that could be repurposed for other ends, perhaps with a bit of inspiration drawn from some of the bite effects. In other words, it's stellar design principles aside, it's not very useful at the table.

How Would I Use This Zine

Although I would mainly use this zine by repurposing the illustrations for other ends, nonetheless, I think there are some fun things that could be done with the zine as written. One way you could use the bugs is to turn them into known hazards of travel. "My God, no one goes into the Desert of Scorching. It's crawling with eyeball guzzlers that paralyze you with their sting, and pestilential fleas that give you uncontrollable itches!" Then the PCs can at least take precautions, and if something happens it will fall more into the daring known hazards category.
Other bugs could be use as the centerpiece obstacle of an adventuring locale, as for example the moths that shock could be fluttering around an orchard with a magical pear tree with the smell of ozone in the air. The players would see the moths in huge numbers with the warning smell. So they would be primed to be careful and if someone got a painful shock it would be an acceptable cost to learn about the obstacle they had to face.
Another idea I had was to introduce an NPC assassin who was a bug collector, and used insects to do their dirty work, almost like a ridiculous gimmicky James Bond style assassin. I think that kind of an enemy NPC could be a lot of fun. I could also imagine a murder mystery adventure where everyone died by a different kind of bug bite, and some kind of evil druid or insect collecting magic user was the culprit. In other words, I would use the zine pretty much as written as the equipment list of some bug-themed villain. 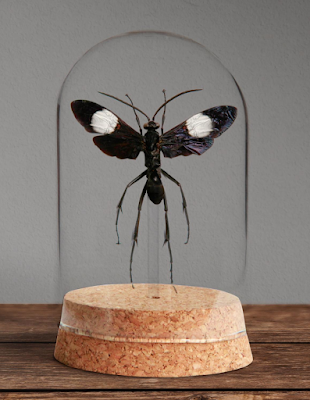 It's OK: ***/*****
Buy this zine in print and PDF here or in PDF alone here if you want to have something beautiful or to learn from its graphic design or to repurpose its wonderful illustrations. Give it a pass if you're looking for something substantial that you can use at the table in retro-game play, unless one of my proffered ideas has grabbed you.
Posted by Ben L. at 6:41 AM