The Shattered Isles: Isle of the Dismemberer 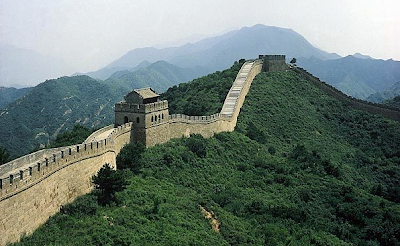 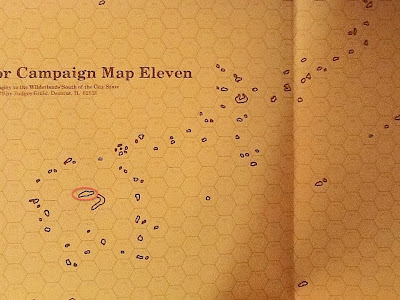 This archipelago of tiny islands (Campaign Map Eleven  3101 to 1110) is known as the Shattered Isles. They were once the highpoints of a mighty mountain range along which a great wall ran. This wall was fashioned from cyclopean stones, winding up and down with the curves of the mountains, dizzying steps plummeting and rising along its spine. Atop the wall, towers sat, and great weapons of war, a bulwark of the then mighty kingdom of Ghinor against its wild foes to the North.


The whole northern end of Ghinor was submerged in a cataclysm 600 years ago. Wandering minstrels sing that it was punishment by the gods for the arrogance of the kings of Ghinor. The priests of Menannan, on the contrary, hold that it was a great gift from the Ancient of the Sea, who welcomed back the earth that was stolen from his watery kingdom, and granted a shining new life beneath the waves to its inhabitants. A few Wayfarers and antiquarians know the truth: that this deluge was the work of the strange machines of the Archivists when they first laid siege to Ghinor.


The Isle of the Dismemberer (1410 circled in red) takes its name from its sole inhabitant. In ages past he was a master architect. He raised for the sorcerer lords mansions to suit their whims, constructed like puzzle boxes, with secret gardens, jeweled libraries, and glittering towers. But in his arrogance, he slighted Sarpedon the Shaper, and so entered his protein bathes and blending chamber. He no longer remembers why he builds, but build he must. So he fashions a cathedral to his long dead master from rude materials, fastened with an ichor secreted from the weeping surface where his face once was. Embedded within the walls are the tanned limbs of his victims. From the walls of the nave, a choir of tortured faces peer, and the entryway is decorated by torsos from which spring a bewildering farrago of limbs.

Outside his own crude hut, the tanned hides of his latest victims hang, their bones bleaching in the sun. Inside, his few remaining tools are carefully arrayed on a rotting velvet cloth: a compass, a mallet and chisel, and a cleverly fashioned level. Hidden among the dried reeds that serve as his bed, a watertight scrollcase contains the Dismemberer's antique blueprints. If removed most will crumble to dust, but a partial blueprint of the demesne of his former master remains, as well as a topographical map that can be used to find the hidden abode of his master's old rival, Mirvolo the Summoner of Voids.

The Isle of the Dismember still bears traces of the wall that once ran along its ridge. Cracked stones can be glimpsed beneath beech grasses and sand. At the Western end of the island great, crumbling steps lead from the islands edge directly into the sea. The water here is especially clear, and a seaweed choked stone path can be glimpsed winding down into the depths. At low tide, a quarter mile to the west, a lone onion dome can be glimpsed poking through the waves. It is the roost of seagulls, its once brilliant bronze now stained white from their droppings. This is the bell tower of the Submerged Spire of Sarpedon the Shaper

The Dismemberer HD8 (40) Mv120' AC4 Att: 2 claws 1d8/1d8 + breath weapon and ichor grab SaveF8 Morale11. Special attacks: Once per day he may shake ichor from his head, doing 3d6 to everyone in a 10' cone, save vs. breath weapon for half. When striking with his claws, on a natural 20 the Dismemberer will pull a victim's head into his weeping ichor for 2d6 additional damage.
Posted by Ben L. at 6:12 AM