The Festival of the Sybarites 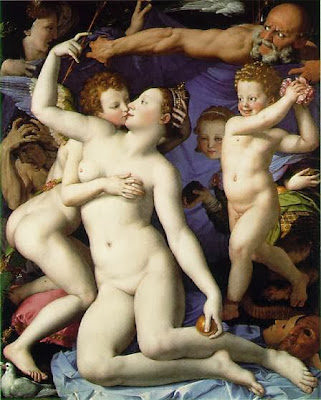 The Festival of the Sybarites is the high holiday of the Ulimite Church in Rastingdrung. It is a festival of excess and social inversion that is notorious throughout Ghinor. In the days leading up to the festival, security in Rastingdrung is even tighter than usual. Unless a visitor is lucky enough to carry a personal invitation from the Chatelaine, he may only enter through the city gates by buying festival tickets at an exorbitant price (50gp). All weapons, armor, religious symbols, and written materials must be checked for the duration of the visit.

The festival begins at dusk of the first day with the Parade of the Blasphemers. This joyful procession includes a rare display of the renowned wooden icons of the Ulimite Saints. The icons depict the saints' gruesome martyrdom for their pioneering research into extreme and unknown pleasures in the days when the Church was still a persecuted sect. They are accompanied by large and cunningly constructed puppets, usually satirical and jesting--mockeries of the Scarlet Censors and the Voluptuaries are especially popular. The center of the parade is traditionally occupied by an enormous float (literally a sailing vessel on wheels) of the Bishop, the giant fish of Lake Wooling who is the subject of many tall tales. Beginning on the steps of the Church, the procession winds its way through the city quarters, spilling out of the gates to finally arrive at the docks as darkness falls. The procession ends with the launching of the Bishop into the waters of Lake Wooling. The revelers are greeted there by fishing and merchant vessels, and specially constructed pleasure barges, all bedecked with colorful lanterns. Skiffs ferry citizens through the oily silver waters out to the celebrations on the lake which last until the small hours of the morning. 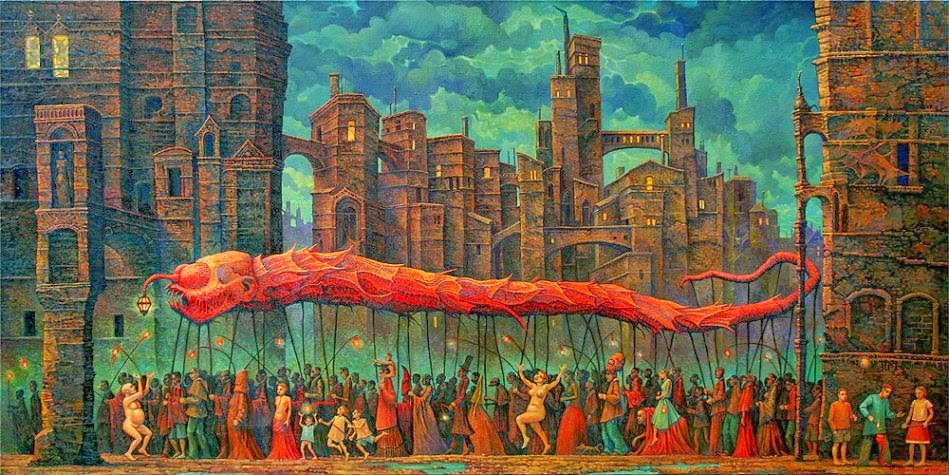 Once revelers have shaken off their drunken sleep, the festivities continue on the following day. The doors of the Church are then thrown open, and citizens may cash in their festival counters for free use of Church prostitutes. Throughout the day, children are encouraged to commit pranks on parents and authorities. Each Scarlet Censor must run the gamut once, sprinting a route from the doors of the Church to one of the city's gates at an unannounced time of his choosing. Children lie patiently in wait in upper storied windows with long curved hooks; should they snag the hat of a Censor from above, then they win the right to subject him to humiliating punishments in front of jeering crowds. (It is said that only the desperate preparations for this event keep the Censors from becoming corpulent through their excess.) The second day's festivities culminates with Sprig's Feast. This feast is funded by the Church, and held in the normally forbidden Greensward of the Chatelaine's pleasure grounds. At long tables, citizens and visitors eat heaping plates of hearty fare from continually replenished buffets, and become drunk on honey mead and fermented sugar cane, as troubadours play bawdy songs, and the cheaper sort of Church prostitutes dance for entertainment. 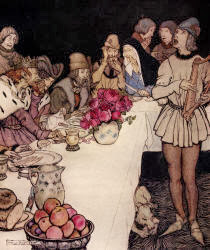 It is said with some reason that there are really two Festivals of the Sybarites. For the Chatelaine arranges special and remarkable amusements for those holding her personal invitation. In the past, her guests have wagered as beautiful slaves, their faces smeared with goose fat, bob for golden apples in piranha filled tanks. This year, rumor has it, she has purchased an unusual number of halfling slaves. These unfortunates have been fitted with elastic suits, and are to be force fed tureens of rich sea-slug and butter sauce. Their flatulence will expand the suit like a ball, enabling her guests to roll them down the bluffs to the Yex river below, where they will be burst like balloons by the starved crocodiles released for this gratifying event.

The Chatelaine's special feast is held away from the commoners in shady bowers. Lit by enchanted lanterns, the diners enjoy a delicate repast. The menu is never the same twice, and the stakes are high for the Chatelaine's new head cook after last year's debacle with sour mermaid sushi. (The old cook still resides in the Silent Halls, a guest of the Scarlet Censors for as long as his constitution holds.) This year, many dishes will be flavored by a savory pink salt distilled from the tears of pixies, as well as hips from the rare ebon rose. Once the meal is finished, the special guests are treated to a private service by the High Voluptuary. After intoning a brief prayer, he feeds them the eucharist of Ulim, a queer alchemical paste glowing with euphoric properties. After partaking, the most beautiful and refined church prostitutes flee through the hidden groves and secret stands of the Chatelaine's pleasure gardens, with the guests following in close pursuit.
The final day of the Festival of the Sybarites begins in late morning with games and contests. Prizes are handed out for feats of strength and agility, and jongleurs and acrobats abound. The final event is the Trial of the Apprentices. There the Chatelaine's seven apprentices display their diverse talents, summoning bleak entities within a ring of flaming symbols, or spinning worlds of phantasms and colored shadows from the light refracted through a single glistening tear. Their competition has real stakes, for the winner receives the status of First Apprentice with all its perks throughout the upcoming year. Dismal failures are punished by exile. Needless to say, scheming abounds, and many an apprentice has been surprised to find that his carefully laid preparations have been ruined through last minute subterfuge. After the Trial of the Apprentices is over, the High Voluptuary arises and says the blessing of Ulim over the masses. Then, the Festival of the Sybarites has come to an end, and Rastingdrungers return to their dreary and oppressive routine. Until next year.