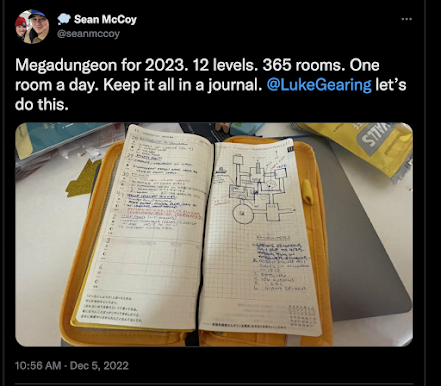 He wrote about it more on his substack here. Sean is calling the challenge #Dungeon23. The challenge is to write one room a day, one level a month, for a total of 365 rooms spread over 12 levels. I'm going to be doing a version of it (more on what I'll be mapping in a minute). A lot of other people on Twitter also said they were in. If enough of us do it, this could be the first REALLY big collective event in the OSR since the heady days of Google plus. I mean sure, there have been lovely game jams and a lot of collective projects around particular game communities (Mothership, Mörk Borg, Mausritter, etc). But this hobbyist, let's-do-a-thing-together project sure would be a lot of fun.

Now I know there's a certain sort of person (OK, it's me) who is perhaps inappropriately motivated to begin a project by the thought of getting a fancy journal. Luckily Sean has us covered because he is rocking a Hobonichi Techo Weeks 2023. As he explains, they're nice because they have graph paper and a facing space for a key broken down by each day of the week. I think one minor challenge will be that the map for each level will be spread across a bunch of 7-room page spreads, but I think we can figure it out. The monthly spread looks like a good place to do a big d30 encounter table for the entire level. You can get the Hobonichi Techo Weeks on Amazon and on Jet Pens for about $25. I got the one in light purple because it is well known among all opium dreaming wizards that lavender is the true color of dreams. Sean's yellow looks real nice too, a sort of rich ochre. Or just do it on your tablet or a Mead notebook or whatever will be convenient and easy.

What will this amount to? Well, I think if enough people do it, we can share our scribbles around in whatever form we feel comfortable. Scans, photos, little PDFs, word docs, whatever it is. Sure, you could post them in Twitter threads or on Mastodon, or (heaven help you) on Reddit. But I would humbly suggest that you consider posting them on a blog. Don't have a blog? This is a golden opportunity to start one! Make it about going through this process. Write one post every week just sharing the results of your journalling. If you blog about this, reach out to me on Twitter or by email (throughultansdoor AT gmail DOT com) and I will put your blog in my RSS feed and do megadungeon roundups on my blog or social media accounts.

What might come of this in the broader sense? Imagine if we got to a place where you could mix and match from a whole host of little bit sized megadungeon bits that people were passing around. For one thing, it might get a whole bunch of people actually playing megadungeon campaigns, and so thinking and talking about them. I think there's a lot of innovation to be had in the wild space of the megadungeon. It has that fun double quality of being a strange old form that was left behind early in the hobby, and also a space of innovation in a certain phase of OSR design. It would be fun to bring it back to life now and see what new places we could collectively go with it.

In my journalling, I will mainly be focusing on The Catacombs of the North Wind. It's one of three large dungeons in Zyan. I'll write about it more soon. But here's the gist. The Sky Singers were the settlers of Zyan. For centuries they were explorer merchants, princely conquerors, nomads of the Endless Azure Sea, famous for sailing aboard a fleet of flying galleons. The Sky Singers received from the spirts of the air a title over Zyan and a new-founded glittering monarchy. In exchange, they agreed to ground forevermore their ships. The six of the great flagships of the fleet served as butchered hecatombs to this treaty, their remains interred with mystical rites of remembrance in the whistling catacombs that riddle the cliff face of the rock of Zyan. The lower levels of these catacombs are open to the Endless Azure Sea and were once a sacred playground of the spirits of the air. Here lie the Chambers of Audience, the long slumbering meeting grounds for the ambassadors of Zyan and the Court of the North Wind. When I run out of steam on the Catacombs of the North Wind, as I surely will, I will likely to something more straightforward, perhaps a classic sword and sorcery megadungeon.

My Hobonichi Techo Weeks is on its way even as we speak. It starts in January, so I'll be beginning Sean's challenge on New Year's Day. I hope you join us!