You've Got a Job on the Garbage Barge! (Zine Review) 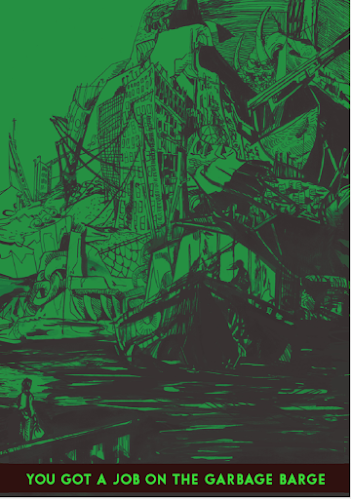 You Got a Job on the Garbage Barge! is a zine by Amanda Lee Franck with a series of stretch goal collaborators, including Scrap Princess, Aaron King, Dungeons and Possums, Sasha Sienna & Jonathan Sims, and Zedeck Siew. The zine was funded through a very successful Zinequest kickstarter that had 700 backers.

This zine is a system neutral campaign setting in 58 pages, a little world in a bottle that could, with a fair amount of work sustain a full campaign of retro-gaming play. The zine builds a sandbox (trashbox?) aboard a cyclopean multi-level dilapidated garbage barge that has been perpetually slogging up and down the coast, stopping to take garbage in exchange for fuel. The patrons and NPCs are a motley crew of down to earth laborers from tugboat operators named Irene (an AI) to dock workers, garbage sorters, trash miners and the like. As you might expect, there are people with a lot of pluck and grit, and not a few hearts of gold. There are also thieving racoons, fighting fish, talking bugs, evil interdimensional garbage wizards, forests of rebar, self-replicating frogs, and much more.

The setting has a heck of a lot of mystery: Who made the garbage barge and where did they go? What is the burning city and how did it get on the garbage barge? What is the lake of glowing orange gas? Is the trash in the barge infinitely deep? What happened to the third tugboat? I’m on record saying that every sandbox setting should come with big mysteries, so I certainly approve.

Another thing I like about the setting, admittedly under-explored in the already stuffed zine, is that it is a mobile campaign setting. The barge moves between different ports of call. The players can disembark the trashbox for brief episodic adventures or fun (all carousing should happen in ports). As someone who has run a thematically focused sandbox campaign for four years, I can tell you that these kind of episodic side hooks can be a lifeline. It's neat the way the setting builds in an "outside" to the sandbox for diversions like this.

The zine also has a lovely sideways cutaway map by Franck wryly labelled “The Known Barge”, which shows the relations of different locations, the terrain that lies between them, and also some different ways of getting there. As play starts many parts of the barge have just recently opened up by the discovery and magical enlargement of a defunct pneumatic tube mail system that intersects with a warren of raccoon tunnels. The opening up of formerly closed territory and the opportunity this provides for exploration and adventuring in the unknown is an excellent campaign starter. (The opening of Ultan's door is another instance of this type.)

The kickstarter for this zine had a festival air. The art and text were great. Quirky trash scavenging is reminiscent of themes with heavy circulation in the OSR during the heydays of Google plus, evoking nostalgia for earlier days of the scene that had giant sandbox ruined sea vessels (HMS Apollyon) and scavenging trash aplenty. As stretch goals were hit, the zine expanded from 32 pages to its current 58 pages. The large list of collaborators, some new, some old hands, gave it a feeling of a passing of the torch.

The zine clearly gained a lot of heart through the recruitment of stretch goal collaborators. It also gained some amazing content. But through this process I suspect it became a bit more like the garbage barge it describes: from a tightly conceived and charming campaign setting, with each stretch goal it became a bit more like a motley assortment of ideas, art, writing tones, layout decisions, and presupposed rulesets, jumbled together, with quirky and delicious “finds” peeking out from a bed of rusted toasters and cracked porcelain.

The art by Franck and stretch goal illustrations by Scrap Princess are excellent. Franck is an illustrator whose work you can see here. Her illustrations in the zine run the gamut from charming to downright striking. I loved them! Scrap Princess works in their distinctive style, which fits thematically with the setting, but isn’t entirely in line with Franck’s style. The difference isn't jarring, but nor is it a perfect fit.

Some of the other stretch goal contributions are wonderful.

Other contributions worked less for me, including Scrap’s Yoo-Hoos--confused, amalgamated, pop-culture weirdos, and an adventure by Sasha Sienna and Jonathan Sims I’ll come to in a minute.
This brings me to an important point: collaboration is hard if you want to maintain a consistent vision and level of quality. I’ve been thinking about this a lot with my zine, since I’m trying to open it up to greater collaboration. Zines, being so short and focused, are perfect vehicles for a singular vision, but they’re hard to collaborate on in exacting ways—because, hey it’s just a zine, and if someone is nice enough to throw their hat in the ring to support your vision. Franck paid her contributors generously, but in the DIY scene who wants to police the content of paid contributors like you were their boss? No one.

The Definitely Could be Better

The zine looks good, quite good, but there are some eyebrow raising layout decisions. Not a big deal--nitpicks really--but I thought I'd mention them. Like the zine contains this table with fonts of all different sizes, including some that practically require a magnifying glass for aged eyes. Don't ever vary fonts in a single table, and don't go this small ever. 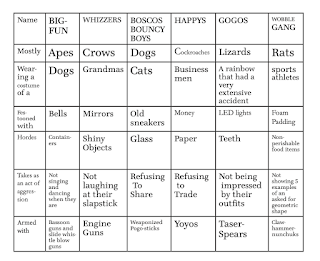 Or, again, here's a table for "New Items" at Kat's salvage shop that looks like it was laid out in MS Word, with a box around the whole thing, including the title, and then broken up between two page spreads. This also doesn't look great. 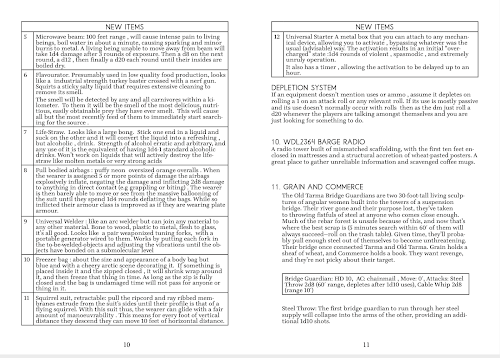 Retro-gamers loves tables. My take away from this is that you can't just throw any kind of table into a zine. Think about cutting your tables down, or doing a table that can be presented as a numbered list rather than a multi-celled table, or presenting the same material without a table at all. Even if you're laying things out in MS Word, you can probably make it look pretty good if you remember you're writing a zine and not an a4 sized book, and there are some constraints given the format. I struggle with this in my own zine, even with the help of layout people using InDesign. Try not to split tables across multiple spreads, especially if the table is in a box.

A Difference of Play Style

Initially, I thought that a more significant weak spot of this otherwise wonderful zine is that the keyed locations it provides on the map, while fun and interesting, with factions and mysteries aplenty, are not written up as sites for location-based adventures.This is the main business of a map in the style of retro-gaming that I'm accustomed to: it presents locations for adventure in the mode of dungeon or pointcrawl that can be discovered through geographical exploration. (To be fair, there are a couple of candidate locations. For example, the three bilges deep in the vessel are easy to imagine building out into full locations for exploration with excellent treasure opportunities; but that’s about it.)

At first I was very confused about this--how could the zine do such a good job in general but miss this?--but then it became clear to me that I was misunderstanding how Franck envisions play proceeding. The problem lay with my assumptions rather than the zine itself.

I got a clue from both the title of the zine and the two included adventures, both of which have PCs taking a job for a boss to go do a specific thing. The envisioned mode of play of the zine is less self-directed exploration of the unknown in search of treasure (salvage) and more taking  job offers from patrons to go to specific locations and do specific work under the threat of various hazards and complications. The location entries are not really written as seeds for imagining a dungeon or point-crawl to be explored by free-wheeling PCs as I had assumed, but rather as fuel for imagining jobs that the PCs might get hired to do.  The two adventures in the zine, one by Franck ("your first job on the garbage barge") and one by Sasha Sienna and Jonathan Sims, probably are intended to give us some sense of how this might go.

Franck's adventure involves the players taking a job to vent a concrete enclosed gas lake that's gonna blow. It seems promising given that it's a sort of "hands on" job dealing with weird decaying situation that fits the setting well. Unfortunately it is marred by a confusing presentation. Despite several readings I had trouble understanding how the two maps included were related to one another and to the description of the site. Franck also presents things in a disorienting order, omitting entries for several numbered locations. She also mixes in important NPCs and generalized threats in the middle of the key for the map, rather than pulling them out and presenting them at the beginning. But the adventure is flavorful, industrial, and useful in that it gives you the general gist of how this whole getting hired to do jobs thing might go.

The other adventure, by Sienna and Sims is a riff on Journey to the Center of the Earth. It has the players taking a job to help crew a drill ship that is to explore the question whether the trash on the barge is in fact infinitely deep. The adventure is well-written and presented, with a nice set of characters on the drill ship, and a simmering open-ended plot involving a plan by some of the crew to mutiny and steer the vessel elsewhere. But unfortunately the adventure does not seem to be written with sandbox style play in mind. For the different "locations" the drill ship encounters as it goes down read more like a series of amusing planned encounter scenes, admittedly with a lively cast of characters and (at lower levels) things getting suitably cosmic. The adventure is not really compatible with retro-gaming play: the rails are there plain to see in the set sequence of encounter scenes at various strata, and the space of creative anarchy is in the struggle that takes place within the railroad car hurtling along its otherwise fixed course.

The problems with the adventures aside, for a retro-game analogy, I think the setting if run as intended would feel a lot like Traveler, which is less focused on exploring unknown locations, and more focused on picking between jobs for various patrons (some shady) that drop the crew into complicated situations with various factions. Even in retro-D&D, hooks consisting of patrons wanting players to do jobs for them are a staple. But so is self-directed exploration of location-based open-ended adventuring sites. The zine gives you tools to do the former, but not so many to do the latter.

This seems to me like a missed opportunity, since the map and the conceit of the newly opened pneumatic tubes suggest so strongly that one of the pleasures will be exploring the unknown, crawling through tubes and raccoon tunnels to new locations that can be explored for salvage and wonder--and getting their before rival salvage crews. To be clear, it's not that there's anything incompatible with this kind of play in this zine, but it also doesn't do much to help you to do this.

How I Would Use This Zine

This zine could be the foundation for an amazing campaign. Here's the work I would do to lay launch such a game.

And then I think we would be ready to go.