The Evils of Ilmire (Zine Review) 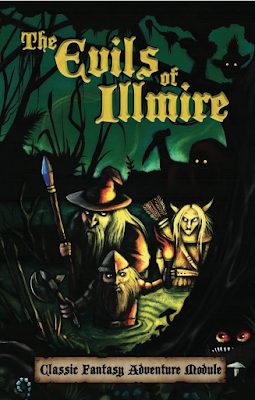 The Evils of Illmire is a zine written by Zack Wolf. It was funded by another very respectable Zinequest 2 kickstarter (506 backers). The zine centers on the cursed town of Illmire and a 19 hex map that surrounds it, an entire campaign worth of material in 68 packed pages of small type--along with numerous downloadable bonuses including a 4-page "underdark expansion"--that you could run as is with almost no preparation.

I can't emphasize how much material the zine contains: a map and write up for Illmire the starting town; a keyed map for the inn where the players are likely to stay; nineteen meaty hex descriptions each with their own random encounter table (!); and FOURTEEN completely keyed and mapped dungeons (!!). Aside from the high page count and small print, the zine accomplishes this with a pair of nifty tricks.

Although The Evils of Illmire almost comically pushes the limits of how much material one zine can deliver, it still manages to feel like a zine. It was graphically designed and written for the page size of a zine, as one can tell from the relentless two page dungeon spreads. Furthermore, the zine uses thin paper and a professional printer (perhaps Mixam?) with the capacity to fold and staple high page counts, so that despite being thick, it is well-folded and lies almost flat when closed like a proper zine.

Note, what follows contains some spoilers. If you might play in the world of this zine, probably don't read on.

I would describe the setting of the zine as vanilla, but in a good way. By vanilla I mean that it uses a lot of classic D&D monsters (not always by name), and the town of Illmire bears a very strong resemblance to Gary Gygax's classic module T1 Village of Hommlet. (In fact, you might think of the town of Illmire as a reskinning of Hommlet in an alternate universe where the forces of good in the town had been driven out or destroyed.) When I say it's "good" vanilla, I mean that it works with these iconic elements in ways that are refreshing and not stale. In that sense, this module would serve as an excellent introduction to players who wanted to experience classic D&D for the first time, while also offering surprises to old hands like me. While I'm obviously not a vanilla man myself (my zine is lilac flavored with candied orchids on top), I can appreciate a vanilla sundae with fudge sauce from time to time.

But I found myself vacillating between two very different views of the setting of this zine. On the one hand, there's something refreshingly light or fairytale like about a lot of things in the zine. There are alpine woods with enchanted lumberjacks. There's a lake covered in strange mists with a legendary giant fish in it. There's an impenetrable forest of thorny brambles, and a crystal palace in the mountains where a giant lives who will host you at a feast.

There's also a sandbox with a lot of mystery, with multiple layers, some more and some less obvious. There are a lot of ongoing dastardly schemes with villains hiding in plain sight.  The mystery feels almost Scooby-Dooish at times, in a good way. I feel like the aesthetic of fairytale cursed countryside plus the Scooby-Doo vibe is embodied visually in the cover by Heather Shinn and Jack Badashski. It fits well with the "good vanilla" aspects of the setting.

On the other hand, the cult at the heart of things seems to be drawn from a different aesthetic universal. If anything, it reminded me most of Warhammer Fantasy Roleplaying. The cult is evil. Like, really evil. Extreme torture. Slavery, including vaguely implied sex slavery (the giant king has sex slaves too). Human Sacrifice. Total mind control. Poisoning children. Nurturing hideous entities in terrible basements filled with gore. There's something called "the Fearmother" involved. Of course there is.

Reading this stuff left me feeling kind of awful. I'm a fan of Call of Cthulhu and a huge fan of Warhammer Fantasy Roleplaying (1E), so I can roll with demonology, hideous cults, and deadly alien entities in the right aesthetic context. But somehow these grubby and vile notes sounded dissonant when played alongside the charming mystery melody of the rest of the zine. But hey, I'm just one person. Maybe the notes struck together will be a dulcet harmony in your ear.

Interesting Approach to the Hexcrawling

The zine contains tidy little systems for hexcrawling, weather, and mountain climbing for exploring the peaks on the map, all of which I enjoyed. The map is nicely divided into three different geographical regions, one mountainous, one forested, and one swampy. But the map is less about region or terrain type, since each six mile hex is really a little world world unto itself.
There are no empty hexes, since each hex has a meaty write-up and almost all hexes have a dungeon hidden in them that players can find (3 in 6 chance) by searching the hex and hazarding an extra encounter check. Each hex also has its own separate encounter table drawing on the secret dungeon to be found there and what's in the surrounding hexes. As a result, there's a lot of texture, and individual hexes would, I think, be very memorable. Again, it's a sort of innovative model that could be emulated, although it wouldn't work for a very large map.
The 14 mini-dungeons on the hexmap are mainly very well done. Dyson Logos did lovely and highly functional maps for them all. While not all are equally gripping some are very good, like The Observer's Tower, and Prismatic Grotto of the Fishmen. Those few dungeons with big NPCs in them are also accompanied by nice illustrations that hang together well.

Some Things That Could Be Better

There are some elements of the zine that could definitely be better. The prose could be more evocative, shorter, and punchier in places. The zine also has some organizational foibles that would be relatively easy to avoid.

For one thing, Wolf begins the hexmap key with a sequential overview of each numbered hex. I didn't find this very helpful, since the overview often didn't contain enough information for me to know what was going in the hex. The overview is then followed by a hexkey that has an almost random numeric order. It covers the hexes in this order: 19, 15, 16, 11, 10, 14, 18, 7, 12, 5, etc. You might be thinking this ordering corresponds to the different geographical regions of the map, but you'd be wrong. The sequence starts off with things in the order players are likely to encounter them, but then eventually jumps a fair bit around the map.

Here are some basic principles about keying maps of whatever kind: 1. Every numbered area must be keyed 2. The areas must be keyed in numeric order. If you want the description in the key to flow a certain way, plan ahead and number things accordingly. For this reason, I recommend numbering rooms and hexes on the map last, so you can move the keys for them around in the text as suits your purposes.

Bizarrely, the same thing happens in the stat-blocks of monsters and NPCs. They are roughly in alphabetical order. Are you kidding me? There are also some inconsistencies I noticed; for examples the demons are said to have magical powers in their descriptions, but none were listed in the stat blocks.

How I would Run This Zine

The truth is that you could run an entire campaign from this zine pretty much right out of the box without doing much more than reading it first. But here are some things I would do to prep.

If you want an entire "good vanilla" campaign with a comfortable but fresh classic vibe, ready to run right out of the zine, then buy it right now here. If you want a repository of small dungeons to steal for your own hexmap, this product is also an excellent value. It also holds some interest for those who are looking for different models for how to develop hexcrawls. If vanilla's not your flavor, maybe give it a pass. At only $10 for print, and $5 for PDF it is a steal.
****/***** It gets four out of five stars: it's good!
Posted by Ben L. at 5:50 AM