Falling in Love with Jorune 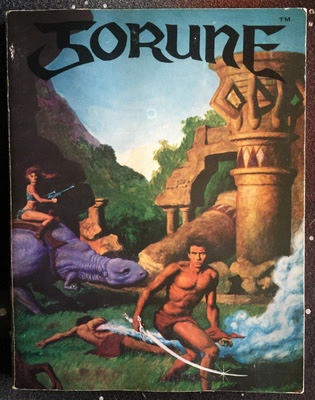 As with so many things I now cherish from the early history of the hobby, I first learned of Skyrealms of Jorune from a post on the blog Grognardia. Skyrealms of Jorune is a sword and planet game first published and sold at GenCon in 1984. Having read someone else's copies of original Dungeons and Dragons and Empire of the Petal Throne, in 1977 a wargaming 7th grader named Andrew Leker saved up to buy his first table top roleplaying game so he too could play in imaginary worlds of his own creation. He picked the then brand new Metamorphosis Alpha, the generation ship scifi rpg by James Ward (the precursor to Gamma World). Leker spent a semester creating his own richly hacked Starship Warden, complete with history, cultures, mutants and aliens, which he submitted as a final project for his middle school English class.

He ran a game on his Starship Warden for years with a group that included a fellow student from that 7th grade English class named Miles Teves. Later, while in college, Leker and Teves decided to detach the game from its roots in Metamorphosis Alpha, and expand it into a whole world of its own, which they called Jorune. Leker wrote up the first edition of the rules and setting while studying math and physics in Berkeley, and Teves illustrated it while in art school in L.A.  (You can read a capsule history in the first issue of the Jorune fanzine Sholari, available here.) The second, and most successful, edition was released in a lavish box set form in 1985. 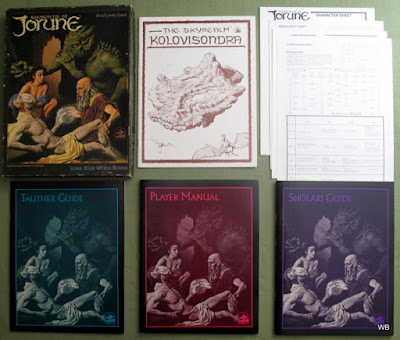 I have a real weakness for odd-ball labors of love from the early hobby, especially ones that captured intensely imagined, idiosyncratic worlds that were rooted in a time before the hobby had become a glossy, corporate affair. You can imagine that I fell hard for M.A.R, Barker's incomparable Empire of the Petal Throne, and after reading James' post on Grognardia, I expected to fall hard for Jorune as well. When I finally scored a boxed set of the 2nd edition and some (now hard to acquire) additional supplemental material, I found myself a strange mix of completely blown away and disappointed.

There were two things that floored me. The first was Teves' extraordinary art, which I would argue is the best art ever produced for a tabletop roleplaying game. I am a profound lover John Blanche and other Warhammer Fantasy Roleplaying art, so that's really saying something. Teves would rise to become a successful concept artist for Hollywood. Just take a look at this. 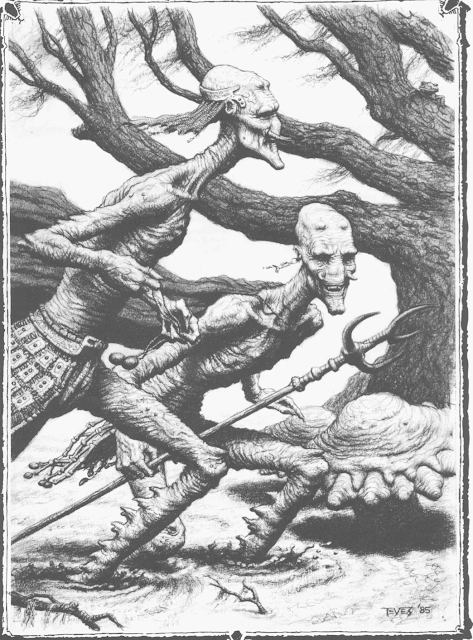 The rich and evocative art work, and to some extent Leker's prose, depicted a pleasingly alien sword and planet setting. Humanity had arrived as colonists on Jorune thousands of years ago, but quickly lost contact with Earth. Their ship and technology was destroyed in a conflict with the shanthas, a native species on Jorune. At present humanity exists at a medieval level of technology in a strange and truly alien world. Recent discoveries of caches of earth technology have shifted the balance of power. The setting is, as Leker writes, "a strange mix of the old and of the new".

Richly imagined alien settings can set a high bar to player entry. Another thing I liked is the way Jorune solves this using a variant of MAR Barker's barbarians fresh off the boat ploy. The players in Jorune are assumed to be young rubes who know little about the world, setting out on the process tothis, the attempt to prove themselves worthy to become drenn (citizens). Another nice touch is an in game prop included in the box set called The Tauther Guide, a pamphlet meant to be distributed to the players, telling them everything their character will ostensibly need to know about the strange world in which they will be adventuring. The idea of orienting the players to the setting with a government issued (propaganda) pamphlet spoke deeply to me, and Teves pulled out all the stops in illustrating it. I also really enjoyed the social setting where the process of tothis involves adventuring in order to convince drenn to vouch for you by signing your chalisk (actually a fragment of a spaceship's hull worn like an amulet) with a laser torch. It's an excellent, faction and patron-based, social set up for a play different from the GP for XP loop. 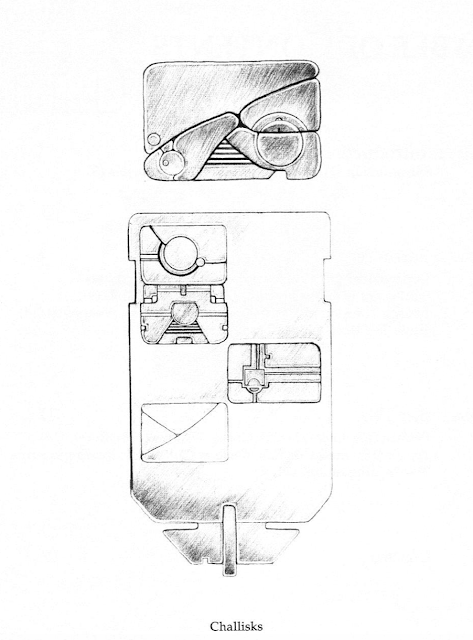 But there were many things in the game that disappointed me on a first reading. Some were superficial problems. At times, the names are goofy in just the way you would expect names dreamt up by a 7th grader for an English class sci-fi project to be. The rules are famously a complicated mess. Instead of magic, the game has dyshas, allegedly strange and wonderful powers that sculpt a bizarre ambient energy of Jorune. But the only flavor I found here was the plastic taste of hadokens and chi-balls, more Dragon Ball Z than the alien logic promised by the setting-description and gorgeously weird art. These were annoying, but what are DIY chops for except to fix problems like this? Like a carpenter facing an old house that with a little love could be a beauty, this struck me as good problems to have.

But less good was that the whole setting was pervaded by an aesthetic that at the time was a turn off for me. There were psychic crystals, drugs (limilates), and auras connected to the astrology of the moons. There were also romanticized, tragic, wise indigenous loin-cloth wearing alien beings who were in harmony with the planet. The whole thing had a vaguely New Age vibe that I found an unpleasant fit with the John Carter of Mars style richly imagined sword and planet setting. Also, the setting was feudal and oppressive, but without a very critical lens (so it seemed to me on a first reading), which was a little annoying given that the set up for adventuring was basically a mix of patriotism and feudal climbing. So with a feeling of real regret, I put the books down and walked away. For a while.
ff


In the intervening years, I got really into French comics and animation, especially the work of Moebius (Jean Giraud), Jodorowsky, and the animation of Renee Laloux, but also the Laureline and Valerian comics, and most recently Spartakus and the Sun Beneath the Sea, the super weird French Saturday morning kid's cartoon. These works were pervaded by richly imagined alien worlds far outstripping anything available in English language comics or animation, but also surrealist psychedelic sensibilities, and a humanist critique of techno-consumerism, that I found equal parts touching and funny. Crystals, auras, and spiritual quests look different after one has seen the art of Moebius and giggled along with Jodorowsky's self-indulgent mysticism. 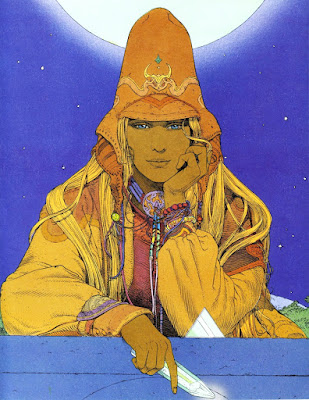 I also started reading psychedelic California fiction and nonfiction, like Terence Mckenna's True Hallucinations, or the Shulgan's PiHKAL: A Chemical Love Story. I had a low opinion of Phillip K. Dick, until I got around to reading his very weirdest late writings, particularly the Valis trilogy, and Ubik, and especially Exegesis, his collected writings about his supposed real life spiritual breakthrough and transcendental communication that convinced him that he was living a real life version of one of the stories from his novels. This Berkeley cocktail of high weirdness, garageband level philosophy, psychedelics, paranoia, conspiracy theories, and metaphysical uncertainties won me over big time.

Then it dawned on me one day, about six months ago. This was Jorune. Or rather, leaning into what we might call the more Franco-Californian aspects of the setting was one way of making the parts of Jorune that had repulsed me sing. When I turned back to the texts with an open mind, I saw that there was a lot I had missed. Huge elements of the setting that I had taken at face value were social satire and parody. The capital of Ardoth is a fog-drenched, hilly city on a bay. Down the coast, there is a town called Monerey, where wealthy racists  vacation and live in gated enclaves. (All it was missing was the aquarium!) Once I viewed Ardoth as a sword and planet reimagining of the bay area circa the 1970s, colored by the aesthico-spiritual impulses of Moebius, the setting jelled. I also noticed that many of the things I had read as straight forward statements endorsing the absurdly exploitative feudal political setting could be read as (and might even have been intended as) tongue in cheek satires. Even the shanthas, on a closer reading, were far more alien, and had a more interesting relation to the history of genocide and colonialism, than I had grokked the first time around. 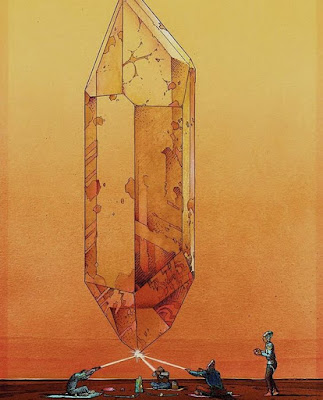 While there was still work to be done here to emphasize the fragments of the setting that had come together in this way, and certainly to complicate some of the more difficult terrain into which the original could so awkwardly veer, I felt that inconvenient longing arise that would not be denied. So, during the quarantine, although I am still running two dreamlands games, and working on the zine (which is coming along, it's in layout, I swear!), for some reason I decided to get this old game into shape for my play.

I am almost done with an entire player's guide for Jorune. It's a hacked Original Dungeons & Dragons ruleset, which I call Jorune Evolutions, based on Gus' HMS Apollyon Rules. It's a classless version of OD&D, with a unified 2d6 skill system, and isho instead of magic. The ruleset is integrated with my system of downtime activities, and uses downtime activities and sandbox advancement rather than XP. It's built for sandbox exploration of the mysteries of an alien psychedelic sword and planet world, while doing drugs and listening to people's baseless speculations and conspiracy theories, and undergoing techno-spiritual evolutions.

I'm going to share my Jorune Evolutions player's guide with you in bits and pieces in the coming weeks, along with my version of introduction to the setting. But don't worry, I'll keep working away at the more D&D aspects of the blog too. So you can expect more on downtime activities, updates on the zine, and a few other goodies, like a list of starter spellbooks that works with my rules for magical research, coming down the pipeline. By the way, if you want to check out Jorune for free, take a look at the trove of material here free, made available with the blessing of the creators. Start with the second edition boxed set material, especially the Tauther Guide. But if you might be one of my players, why don't you hold off looking at this material. I'll have my own Tauther Guide for you at a later point, and why muddy the waters? 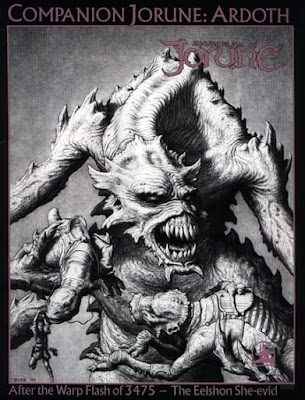