In many places streets end with a sudden drop past the sheer wind scoured cliffs into the endless depths of air. These spots are framed perhaps by a decorated arch, or a few steps that lead down to single precarious tree bearing silver melons, its branches twisted into grotesque shapes by fierce gusts. The winds of Zyan are everywhere, whistling through cramped and ancient alleys, sunken arcades, and carven courtyards. Each wind has its own name, and is greeted by the residents like an old enemy. They hide from the winds behind gilded masks, which they remove only in the embrace of lovers, or in their steaming guild bathhouses. Beneath their coverings, the Zyanese are tall and lithe, with long pale faces, cruel cheekbones, and lustrous white hair. 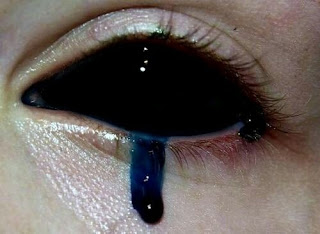 Zyan Above is ruled by the Visible King, currently one Umpalior, Weeper of Indigo Tears. He is attended by a council representing the city's five great guilds. The symbol of his rule is the metaphysical crown, fashioned from shining gold and fulsome pearls. It was given to him by his father who received it from his father in turn. The crown passes ever from a king (or queen) to his eldest direct heir. Should he produce no offspring, on his death the metaphysical crown is melted down and a new crown fashioned for the coronation of a fresh line of monarchs, selected by the council in conjunction with the priests of the six temples. 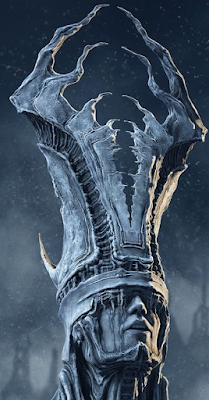 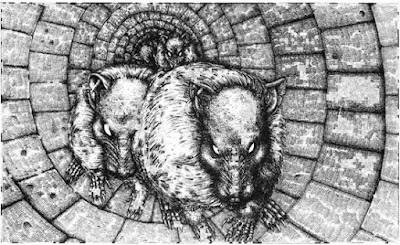 Betwixt Zyan Above and Zyan Below, the undercity winds its cramped and twisted way through the center of the floating island. The undercity is a dangerous and forlorn place. It consists of a network of basements, catacombs, and hidden shrines of the great guild houses and temples. Some are fiercely guarded, others abandoned and crumbling, repurposed by strange life that hides in the interstices of the island. These holdings are connected by the sewers that channel the waste waters and effluvia of Zyan above into the great sewage river that streams ever downwards to Zyan below. Many vile entities swell engorged on the rich castings of the Zyan above. In places the underground halls of the undercity open too onto vast natural caverns where dwell the strange dream-creatures of alien worlds.


At the bottom of the undercity, the offal sinks and great sewer river spill into Zyan Below. Here a fecund and ever blooming white jungle grows like a palid reflection of the gilded towers above, glimpsed in the fetid waters of a still pond. It springs from the base of the floating island downwards, a dense riot of immense fungal blooms, and thick snaking vines covered in flowers that look like the jeweled wings of insects. At midday it is dark with shadows, but at sunrise and sunset, the sparse lower levels are brilliantly lit by slanting ruddy glow of sunset. 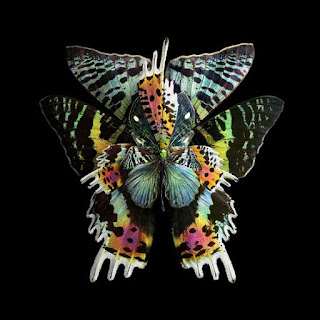 In better times, Zyan above ruled Zyan below. The lush white bowers inclosed ingenious hanging manses and shrines to the strange deities of Zyan. It said that the Incandescent Kings, through forgotten and improbable arts, fashioned there a hanging summer palace, with fluted parapets and razor thin walkways. Within its walled garden, carefully tended groves grew heavy with luscious fruits and flowers so vivid that their image would be seared forever with a glance into the eyes of waking mortals. In the summer palace, the guests of the Incandescent Kings soaked in bathes of lapis-lazuli and emerald tiles, and reclined on velvet cushions while feasting from topaz tables heaped with succulent jungle fare. 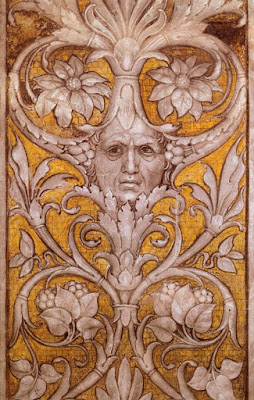 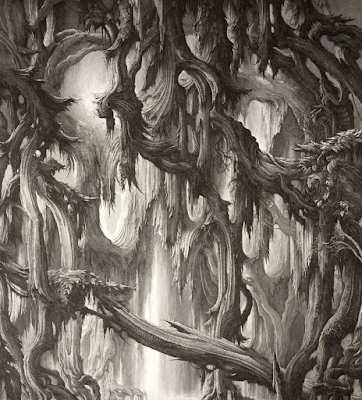