Wayne of Wayne's Books posted a lovely picture of a map he found in an old RPG product he bought, and this led Chris Kutalik to write about a dungeon that he found in the Runequest Vikings supplement. I too discovered a wonderful hidden gem in a secondhand RPG product. The item in question is the original Empire of the Petal Throne, which I snagged on eBay a few years back, missing only the box. I think I bought it from someone in England.

It's my favorite RPG possession. Tekumel is simply a wonder: a post-apocalyptic, sword and planet setting, with a strange near-eastern flavor--the quirky high-water mark of the early hobby. But even more than this, I love my copy for the alterations the previous owner made. The changes are clearly a labor of adolescent love, and a product of passionate engagement with Tekumel.

The EPT book was spiral bound. In my copy, the previous owner had bound looseleaf pages into the text at points at which he wanted to insert home-brewed material. He did so in a systematic and planned fashion. I know this because some of the planned inserted sections remained blank. Like this one. 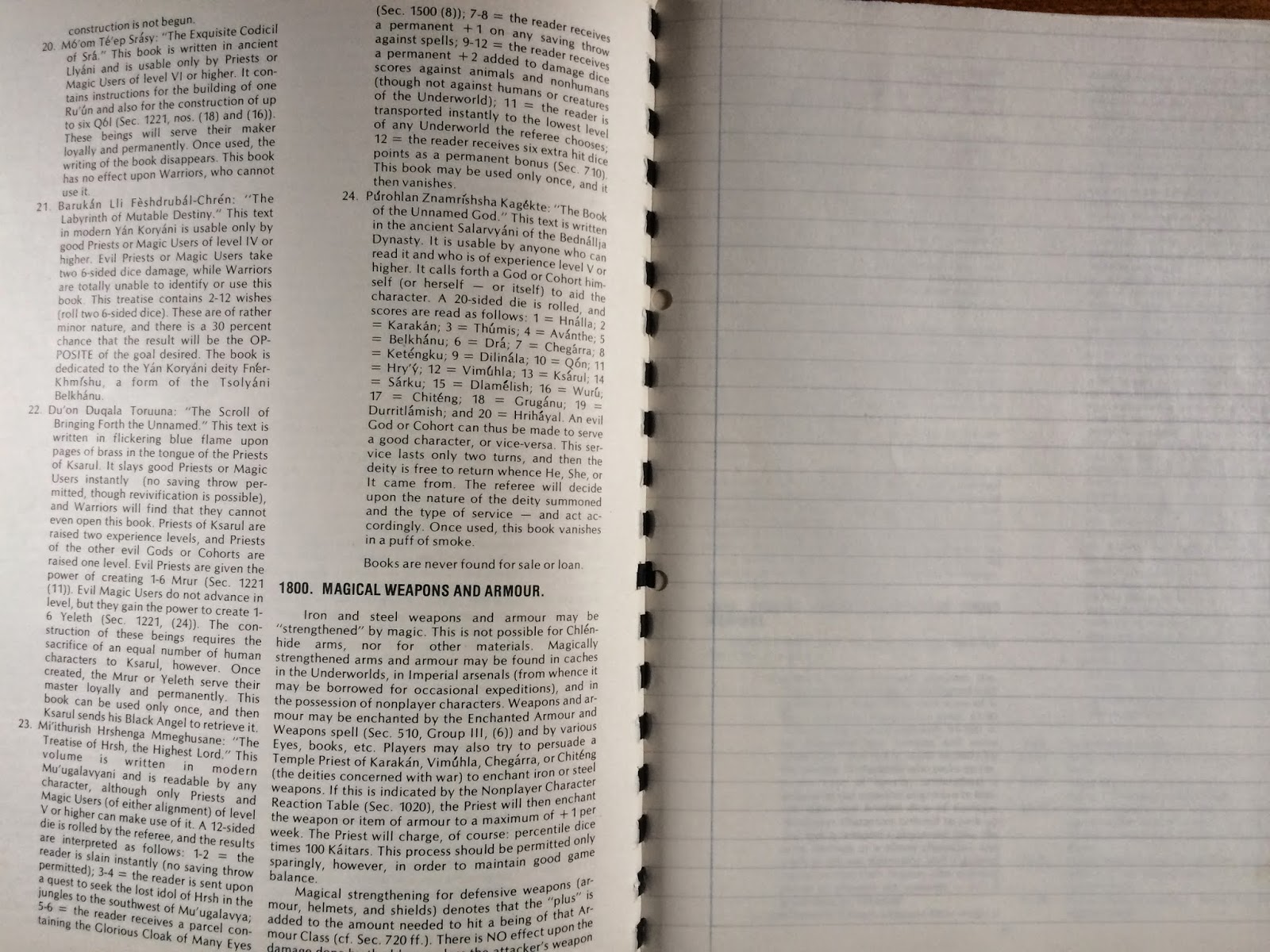 Here he had clearly intended to insert some magical weapons and armor of his own, but never got around to it. Similar blank sections can be found in the section on scrolls and, more interestingly and appropriately for Tekumel, in the section on taxes. (This shows an understanding of the setting.)

But there are inserted pages that are chock full of home-brewed elements. In EPT, Barker allow PCs to pick from numerous possible former professions for would be adventurers. He writes that "most of the above-listed skills are self explanatory", and only bothers to discuss the mechanics of the skills e.g. alchemy, that might actually be of some use to adventuring types. However, this was not good enough for the previous owner who provided the mechanical effects of the remaining humdrum professions. They are hilariously useless. My favorite is the skill possessed by the paper-ink maker. (Click on the images to enlarge.) 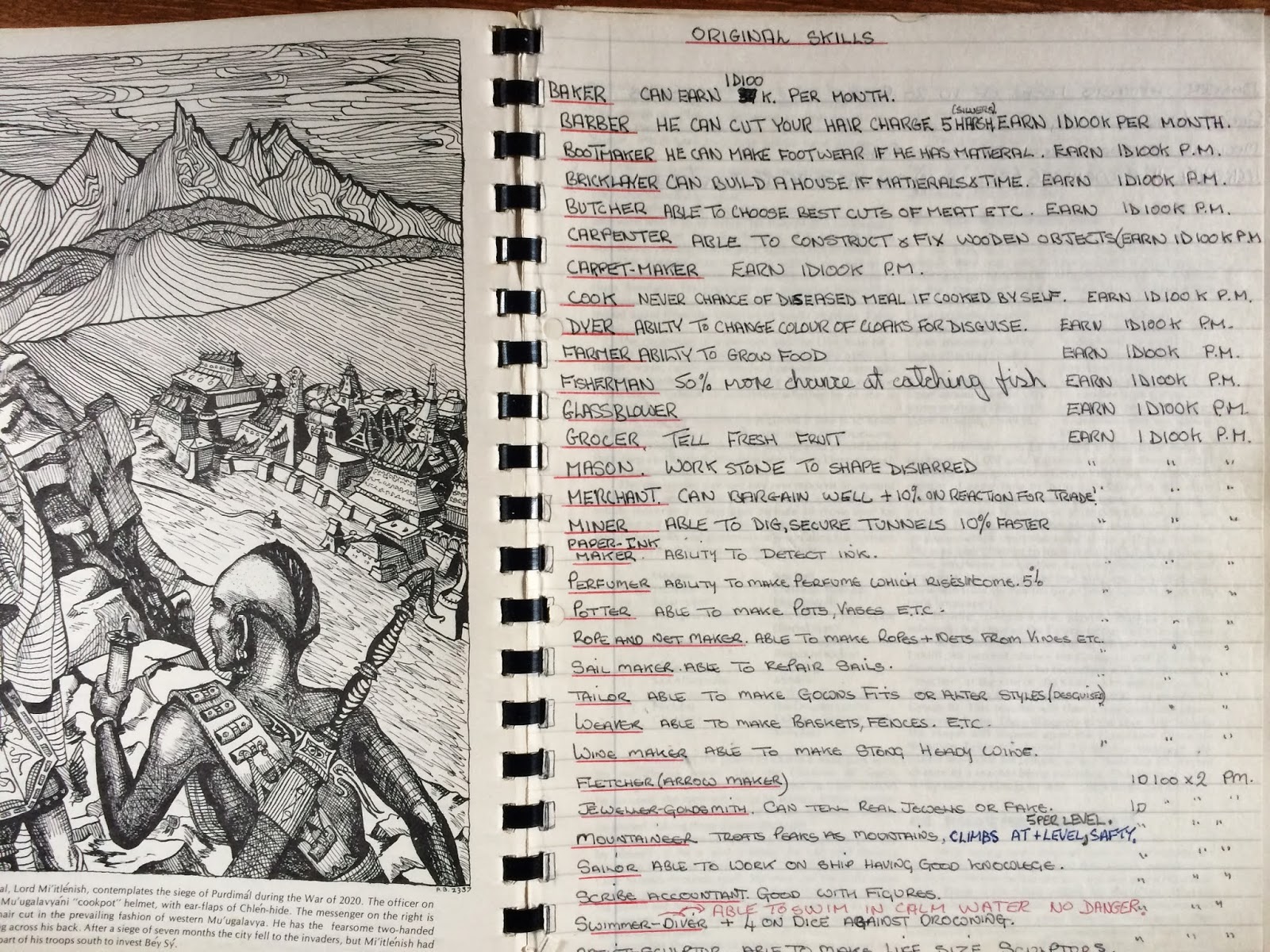 The real gems, however, come in the monster sections. First off, he went through the entries and added the proper Tsolyani accent marks to all the creature names. He also inserted pictures of many of the creatures not illustrated in the text. Below, you can see a central illustration from the original text, and then his smaller amateur additions surrounding it. The illustrations accurately reflect the descriptions. As far as I know, some of these things have never been illustrated, until Jeff Dee started on his recent Tekumel illustration project. But, Mr. Dee, I'm sorry to say that this author beat you to it by several decades!

From the section on humanoids: 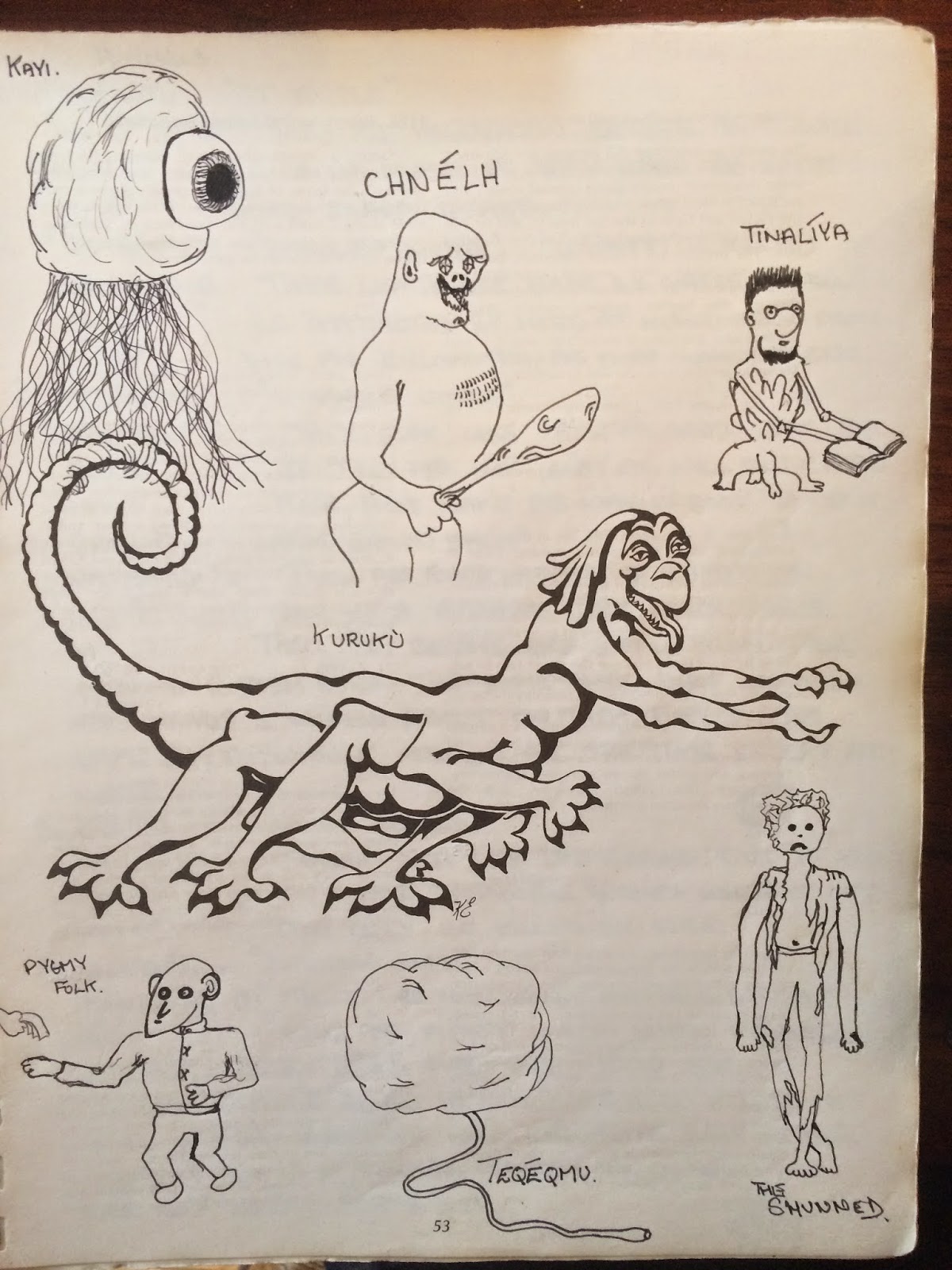 From the section on flyers: 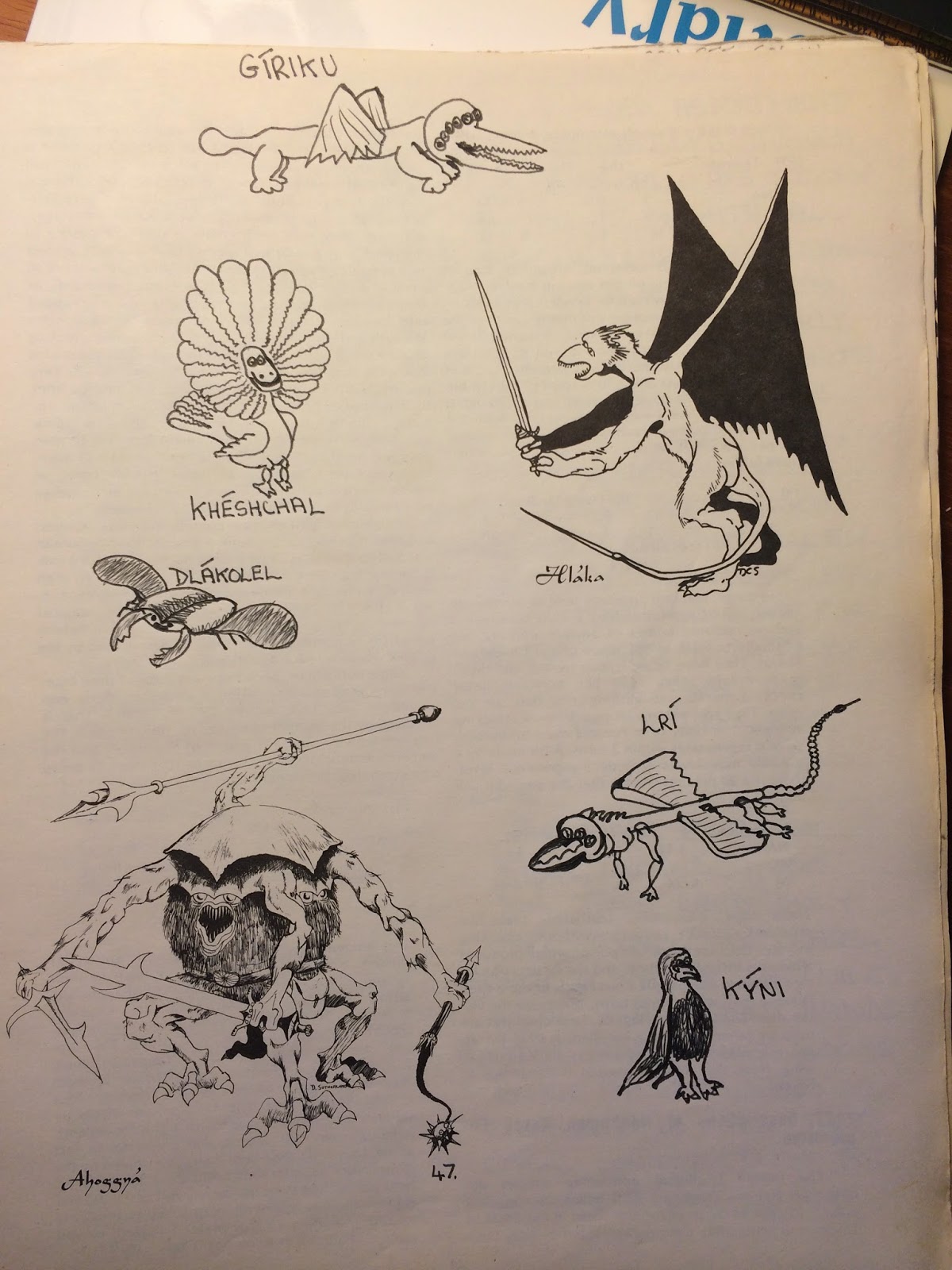 From the section on water creatures: 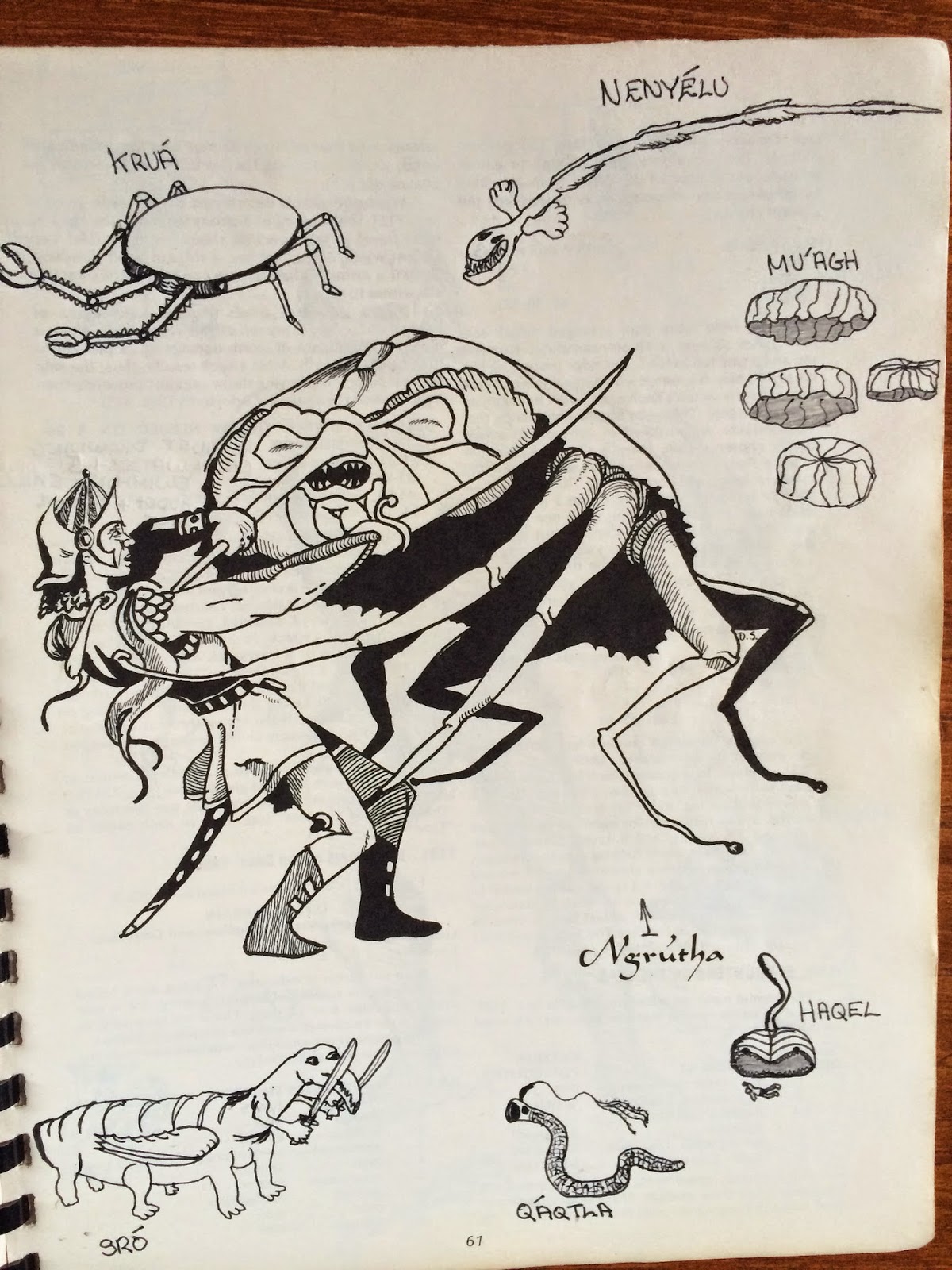 However, by far the best of his original illustrations come in the following piece below that is a mix of aquatic and underworld creatures. They're all nice, but I draw your attention especially the depiction of the Hli'ír, a foul creature of the underworld, about which the description in the EPT book says, "These mad creatures are hideous to look upon, and anyone who does so may go insane." Naturally this presents some problems for the artist, which our anonymous author has elegantly circumvented below. 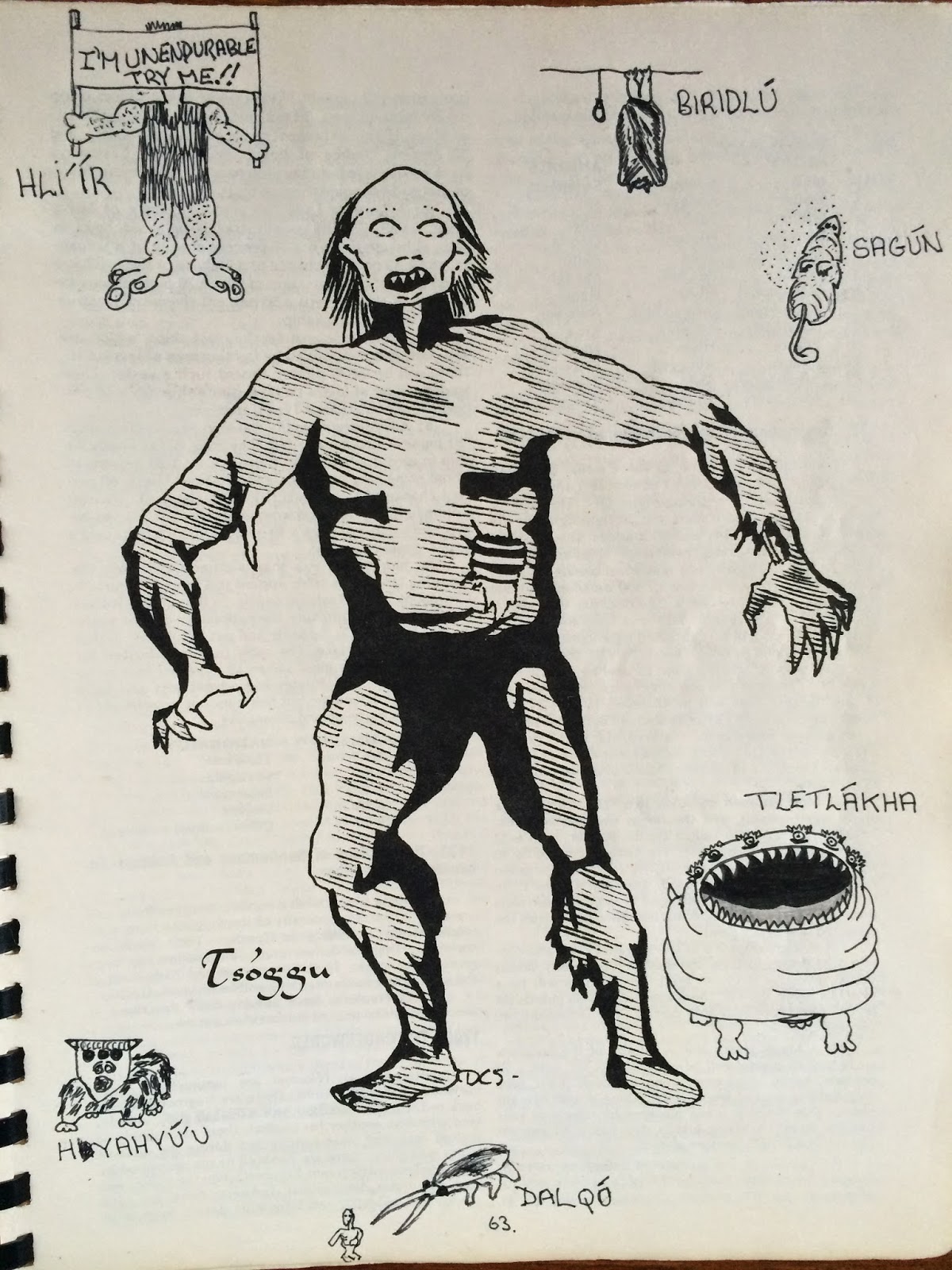 The second sort of alteration the owner made to the bestiary section was to insert pages and pages of new creatures, including faux Tsolyani names, descriptions, stats, and sometimes small illustrations. He made additions to the section on animals, the section on humanoids, and especially the section on underworld creatures. Indeed, for underworld creatures he produced not one but two supplemental encounter tables of creatures of his invention. They are predictably wacky, with a sort of Fiend Factory vibe. They include an inflated piano with teeth, and various floating body parts, some quite helpful. 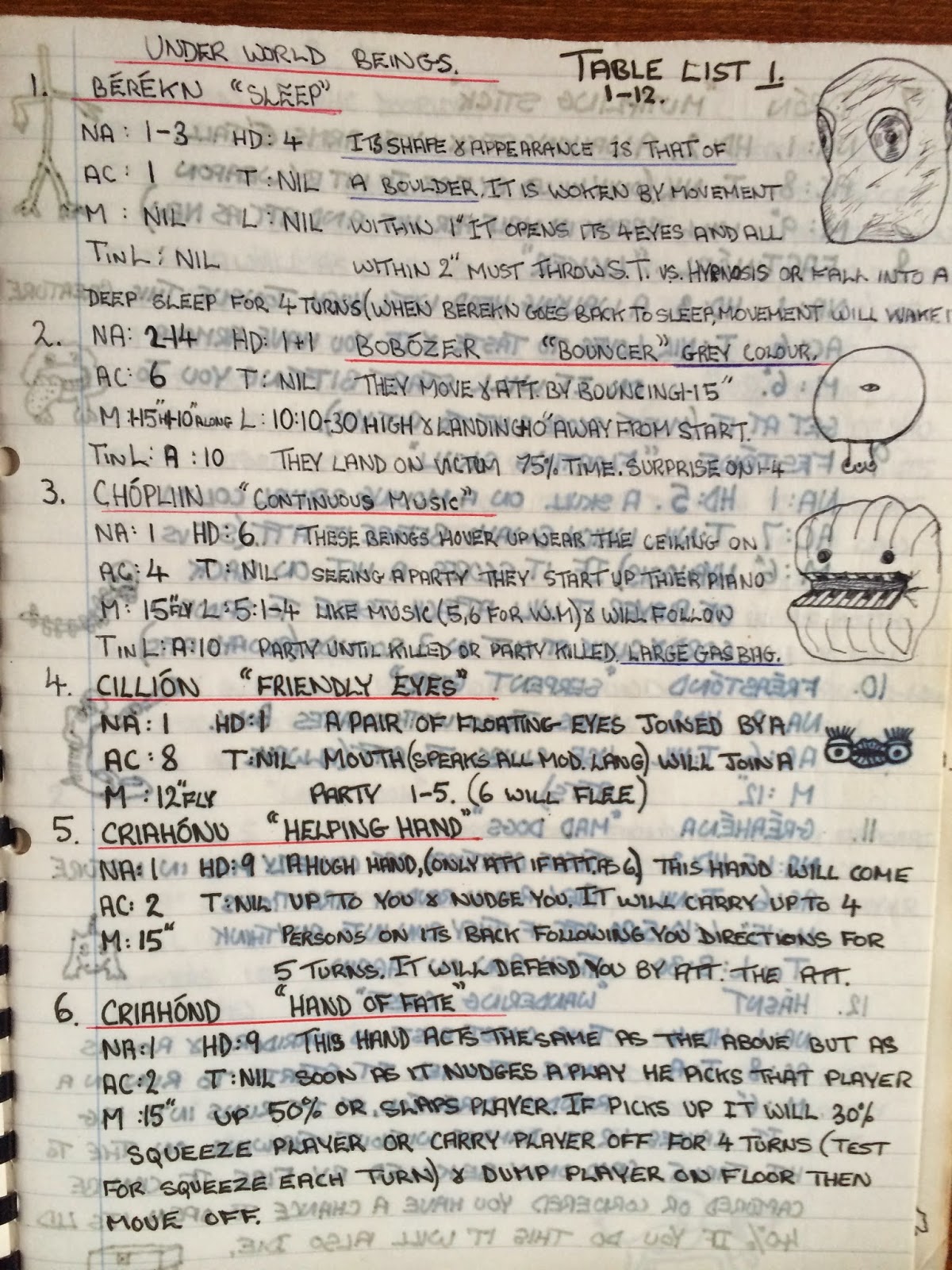 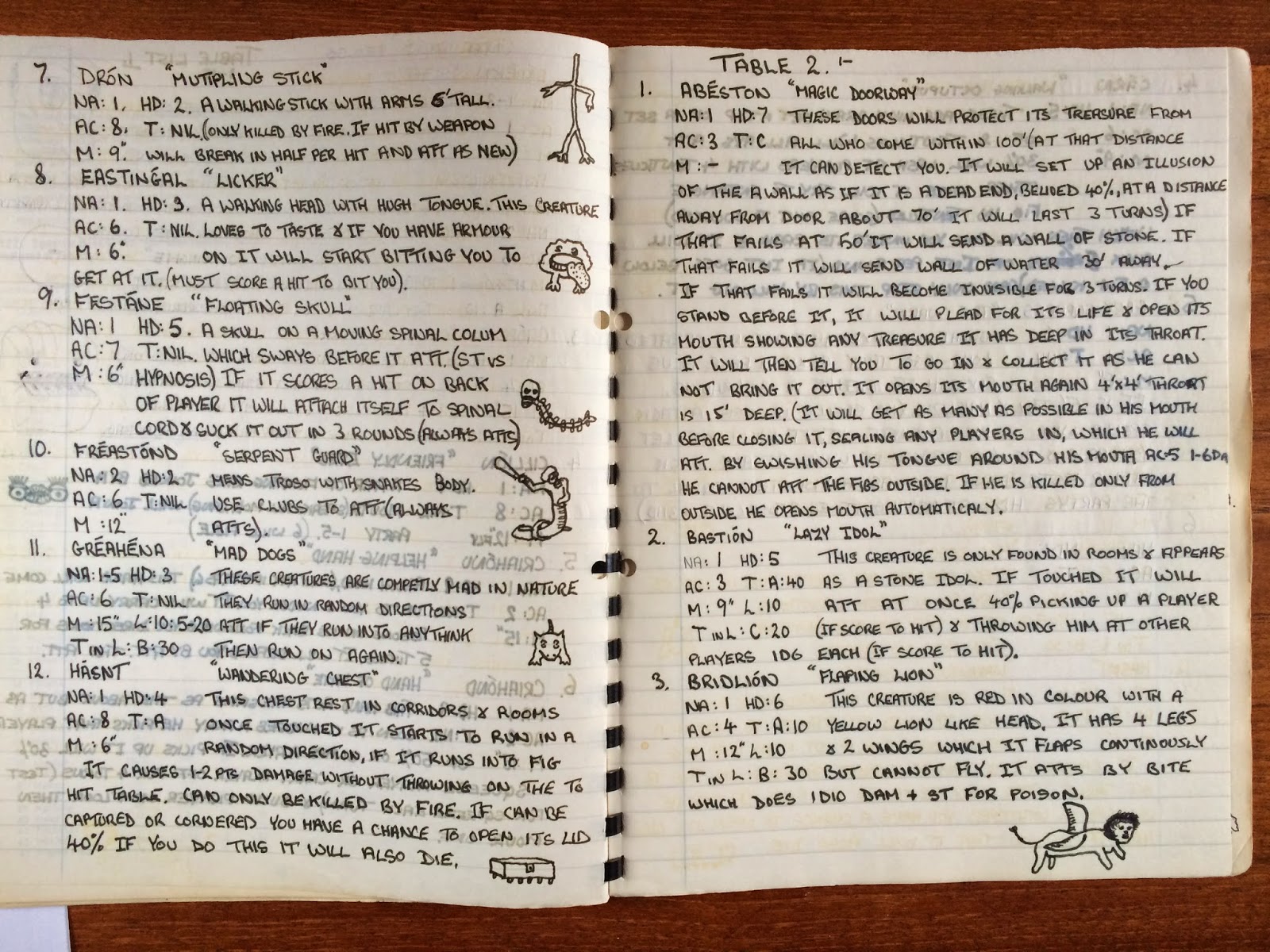 In tribute to this adolescent labor of love, I have transcribed the author's non-human races and underworld creatures below, glorious typos and all.

1. Baldoneá "The Underground Ones" (Can see 60' in dark.) NA:1-100 HD:1 AC:6 T:A M:9" In Lair: 10% 10-110 Treasure in Lair: Type F (45%) These are a mixed assortment of beings crossbreded through many, many years. All are stocky but of different heights. All are humnoid shape, some have dog like faces, others long noses & beards. All are of a sickly green skin. They cannot bear daylight & very rarly venture out at night. They have a great hate of all top side living things & will do there best to kill them. None of them use magic, but there is a 10% chance a leader (30HD) will carry an ancient artifact a 3' long steel stick with a black tip (stun stick). Each hit roll 5d6 if over targets hit points knocked unconcusse for 1-4 hours. They will try to capture you alive, for they are always hunting for more food! They will keep you in cells until it's your turn. It is said they bred a fat type of their race just for eating.

2. Hómug "The Clone" NA:1 (15% 1-10) HD:1+3 AC:9 Treasure: Type B (50%) M:12" In Lair: 30% 3-22 Treasure in Lair: Type E (35%) There are few of them, around 1,000 for they bred only once every 10 years. They are telepahic wit a range of 1 mile. They are human sizes with black skin, hands webbed, bald head, pointed ears, face looks like a prune with 2 black pip eyes. They have the power to clone others. To do this they must be in physical & telepahic contenction for 1 hour. To help do this they have a drug which paralizes people for 1-3 hours, this is produced in their big toes which have tiny stings, needle like, it takes 1 week to grow a stinger. They have 2 altogether. They are ambitious & seek power so they try to take over high people & dispose of them afterwards.

1. Bérékn "Sleep" NA:1-3 HD:4 AC:1 Treasure:Nil M:Nil Its shape & appearance is that of a boulder. It is woken by movement within 2" must throw S.T. vs. hypnosis or fall into a deep sleep for 4 turns. (When Bérékn goes back to sleep, movement will wake it.)

5. Criahónu "Helping Hand" NA:1 HD:9 AC:2 T:Nil M:15" A hugh hand (only attacks if attacked) This hand will come up to you & nudge you. It will carry up to 4 persons on its back following you directions for 5 turns. It will defend you by attacking the attacker.

8. Eastingál "Licker" NA:1 HD:3 AC:6 T:Nil M:6" A walking head with  hugh tongue. This creeature loves to taste & if you have armour on it will start bitting you to get at it. (Must score a hit to bit you.)

9. Festáne "Floating Skull" NA:1 HD:5 AC:7 T:Nil M:6" A skull on a moving spinal column which sways before it attacks. (ST vs. hypnosis.) If it scores a hit on back of player it will attach itself to spinal cord & suck it out in 3 rounds (always attacks).

12. Hásnt "Wandering Chest" This chest rest in corridors & rooms. Once touched it starts to run in a random direction. If it runs into figure it causes 1-2 pts. damage without throwing on the to hit table. Can only be killed by fire. If it can be captured or cornered you have a chance to open its lid 40%. If yo do htis it will also die.

1. Abéston "Magic Doorway" NA:1 HD:7 AC:3 T: Type C M:Nil These doors will protect its treasure from all who come within 100' (At that distance it can detect you.) It will set up an illusion of a wall as if it is a dead end, believed 40% lasting 3 turns at a distance of 70'. If that fails at 50' it will send a wall of stone. If that fails it will send wall of water 30' away. If that fails it will become invisible for 3 turns. If you stand before it, it will plead for its life & open its mouth showing any treasure it has deep in its throat. It will then tell you to go in & collect it as he can not bring it out. It opens its mouth 4'x4' throat is 15' deep. It will get as many as possible in his mouth before clsoing it, sealing any players in, which he will attack by swishing his tongue around his mouth AC:5 Dam:1-6. He cannot att the figures outside. If he is killed only from outside he opens mouth automatically.

4. Cárn "Walking Octopus" AN:1 HD:5 AC:6 M:9" These are hugh brain set atop of a set of 8 tenticles. Will always attack 30% will lash at players with 4 tenticles. Other wise it will try to entangle figure in tenticles (score a hit to succeed). Which then will pull you under its brain & it will such 5% of Int per round (If int goes below 0 figure killed). Can only stop this by killing it.

5. Grey Sqaargs "The Guard" NA:1 HD:6 AC:1 T:Nil M:6" Squat huminod automations created long ago. They glow a pale blue enough to light a 20' radius. It is 5' tall and hairless. (No spells unless attack spells will work against it.) It iwll not let you pass & if you attack it will attack back with 2 fists doing dam as a monster equal to the party's HD attacking it. E.g. 3 first level=3 HD.

6. Jeherrin "Clay Ones" (Speak common tongue) NA:1-100 HD:1 hp AC:9 M:3"/6"swim These creatures are small mud or clay lumps, which rise into a point. They live always underground as sun light turns them to dust. They never attack & are wary & cowards, always try to flee. Will help if you are very kind to them.

9. Hundró "Death Kiss" NA:1 HD:3-3 AC:5 M:6" A tall 7' skinny man shaped creature with the look of death upon it. It looks like it has 2 black eyes, its skin is clamy white. If it scores a hit it grabs figure in an unbreakable hold & next round kisses figure if it scores a hit which need ST vs. Poison or die, Drained which the Hundro half its victims hit points.

10. Búmm "Droppers" NA:1-3 HD:1-1 AC:8 M:6" A black raggy looking creature, no eyes or limbs. It just looks like a rag. They hang to ceilings & drop (automatic hit) on movement below. They wrap themselves around heads of victim & suffucate victim in 3 rounds after hit. All hits on Búmm do half damage to victim as well.

11. Ghost NA:1 (10% 2-11) HD:- AC:- M:12" A spectural shape of a human which is luminous in colour & is see thru. They cannotu be attacked normally but can be driven off by prays & holy symbols & amulet of power over undead. It cannot touch party but can only hamper by jumping out to scare etc. The ghost cannot speak but can grown & moan. It cannot touch or move anythink physical. (Can make themselves invisible at will.)

12. Moss Men NAL1-10 HD:2+2AC:7 T:Nil <:10" A moss covered humaniod shaped being with no apparent facial features or fingers. (They always attack non moss men.) IF they hit dice fore area, this is now completely moss (if weapon hand drop weapon as now has no fingers). Once every part of a man hit he coolapses for 1d6 rounds & then is a complete mossman for life. But if manage not to be completely covered & get away from home moss by over 5 feet then after 1d4 rounds moss goes back to normal. (Missile fire has no effect & clubs do half damage.)

Labels: Empire of the Petal Throne, the Hobby