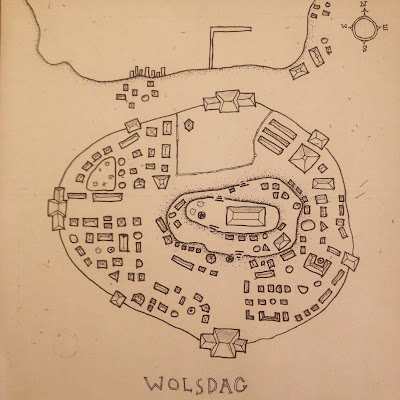 Wolsdag (4702) is a seaside town, through which all overseas trade flows into the region. (For general background and a map see here.) Although nominally a free city with a popular assembly consisting of all adult citizens, the town is under the de-facto authority of the Merchant’s Guild, which controls the majority of appointments to the council that manages daily life and vets all new legislation. Although Woldag's modest force of Free Mariners is no match for the opposed armies of the Grim Duke and the Chatelaine of Storms, the Guild uses the soft power of trade to consistent advantage in the vacuum created by their conflict.

The town is ringed by stonewalls set with three gates. The north end is the covered bazaar, where merchants from throughout the Wilderlands barter exotic wares in tightly packed rows of tents and makeshift lean-to's. The enormous guildhouse rests atop the hill in the center of town, removed from the hustle and bustle of the bazaar. It contains the offices and apartments of the guildmasters, and the Gilded Heron, an inn open only to guildsmen and their invited guests. At night painted lanterns hang from lavishly carved wooden porches, shedding a dim red light on the merchants and their wealthy guests who can be glimpsed from below on the Gilded Heron's lush decks and private patios. Within the center of the guildhouse the windowless Temple of Nephtlys lies. There the Tempters preach cunning acquisition to their flock and spin metaphystical webs to snare unwitting prey.

Unlike the guildsmen, most citizens of Wolsdag live outside the town walls, in fishing villages and sea shanties scattered up and down the beach. If one walks past the winding tents of the covered bazaar and through Gull's Gate, directly north of town one finds the docks: the life's blood of ordinary Wolsdag. When the fisherman return at dusk, the fishmarket opens its heavy tables laden with wonders of the sea. At the edge of the fishmarket, Old Nin's raucous tavern overflows with the rougher sort of sailors and Free Mariners, who gather to trade strange tales of the sea and lose themselves in drink. Turn right at the docks and follow the beach and one will soon spy the lonely pastel spire of the Keeper of Corals. He controls the tides for the Guild in exchange for exquisite and unmentionable articles essential for his strange congress with the sea.

The Guild itself is split into two factions: the Monopolists and the Enterprisers. The Monopolists are the old guard operating family-owned monopoly licenses from the Invincible Overlord and World Emperor on established trade routes. They have strong control of the official guild structure, and  are fat and complacent. The Enterprisers are guildsmen who have been shut out of monopoly licenses. They have been forced, at considerable risk, to open new trade routes, and are lean and angling for change. Owing to recent successes in the the discovery of valuable new spices not covered by existing monopolies (red gill powder and luminous braxite shard), the Enterprisers are currently a rising force. However, the Monopolists still have the upper hand with a majority of Guild seats on the Council, and control of the priesthood of Nepthtlys, the goddess of endless acquisition and peerless schemes. The Enterprisers maintain connections with disaffected freeman and the Temple of Mannanan. The least scrupulous among them, slavers and cuthroats, have dealings with the outlawed cult of Mer Shunna.