Rastingdrung (4708) is a small walled city on the shores of Lake Wooling. It is in thrall to the unforgiving Chatelaine of Storms, a sorceress who rules with the aid of the Voluptuaries, priests of the Church of Ulim, the sole form of (legal) worship in the city. This unseemly religion is strictly enforced by the Scarlet Censors who freely employ terror and paid informants. The city is the site of the colorful annual Festival of Sybarites. For a map and an overview of the region click here.

Roughly 5 miles wide and 10 miles long, Lake Wooling is fed by creeks to the North and East, and drains into the Yex River to the West. The water bears a multicolored sheen that ripples in the daylight, and shines silver in the moonlight. Around its edges can be found stinking fens populated by silver grasses and vicious long-legged birds, known to the locals as “grovellers” because of their pleading call. Wooling is home to several varieties of fish that suffer from abnormalities including albinism and gigantism. The lake is rumored to be home to a giant bottom-feeder that Rastingdrungers refer to as The Bishop about whom superstitious fisherman tell many tales. The corroded remains of a submerged metal structure can be glimpsed from the north shore (4707). The northwestern shore is heavily wooded by a species of tree known as the Shining Oak that yields excellent timber.
The city of Rastingdrung is set back from the lake. It is girded by thirty foot black stonewalls, over which the dark tower of the Aviary rises like a black finger, around which dark forms can be seen wheeling. These are the Chatelaine’s dread Storm Riders, black knights who ride on the backs of massive war crows. Outside the walls brightly colored shanties, rickety wooden homes, and open-air markets, spill into a bustling harbor. Movement into and out of the city is strictly controlled. A citizen must display his black seal and match his name to the rolls. Imposters are easy to spot, owing to the distinctive pale skin and spindly build of Rastingdrungers, and are always turned away. Other visitors must apply for a temporary red seal (10gp) that is denied or revoked on the slightest suspicion, and may not enter the city bearing either arms or written materials. Although it is known only to a few, there are other ways into the city, through the ancient system of tunnels that run below it. 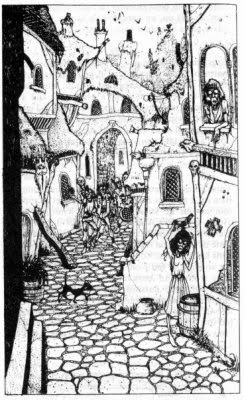 . The smell of incense and the sound of piping flutes from the Temple of Ulim pervade the city at all times.


to be given a tour of the Aviary in which her monstrous war crows are kept in giant cages reached by slender bridges, where they are tended by their nervous handlers.