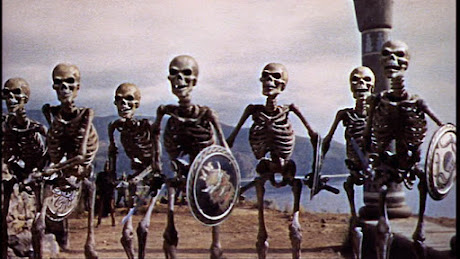 A bunch of us have launched a new co-authored review blog Bones of Contention. The introduction to the blog is here, and you can read the first review in my series, Ludic Dreams, here. I review two new zines from Zinequest 3 that presents systems for tracking NPC relations and ongoing shenanigans, A Small Entanglement of Flowers and Entanglements, and A Tangled Web.

I'd like to say something about why we launched the blog and how we're thinking of the collective project. We launched the blog out of a sense that there was a problem with the culture of criticism and reviews in the retro-gaming scene. One basic problem with reviews that we face in our little DIY corner of the hobby is that most reviews happen in the form of boosterism, where people share stuff on blogs and social media because they're excited about it. Since this is a small scene, where almost everyone knows almost everyone else, at least at some vanishingly small degree of separation, this often involves friends lifting up the work of friends. Which is great, but it has its obvious limitations. Critical reviews in this mode are rare. If you give over your blog or a twitter thread to write a random critical review of something in this space, the results are hurt feelings (why did you give over your space to single me out?). So game design don't improve through criticism.
Another problem is one of time. It would be nice to review things regularly. But who has the time, especially if one is also writing material or designing games, not to mention holding down a day job, and all the rest? Similarly, it would be great if more reviews were written as a result of playtesting. How can you have an adequate view of a game product without playing it? Again, problems of organization and time make this unrealistic, especially if you're running a home campaign already.

Of course, there are some dedicated review sites (especially Questing Beast and Ten Foot Pole) that have been going for a long time that devote huge amounts of time and energy solely to reviews. But they are single-authored and so convey a single point of view. This point of view is often quite valuable, but it's just one established voice. So it would be nice if there were some new perspectives entering the conversation too. Another more politically delicate problem with some of these sites is that they are trollish sites (like Prince of Nothing) or have unmoderated comment sections that through the charming magic of the internet sometimes devolve into flame wars and trollish behavior (i.e. Ten Foot Pole). This makes retro-gaming a less welcoming space than it should be and does absolutely nothing to improve critical discussion and evaluation.

Our solution to these problems is to create a dedicated review site that avoids boosterism for substantial reviews. Instead of being single authored, we draw on a large enough group of people to keep reviews coming, and do at least some playtesting. Our goal is to try to get at least one review up a week. We also tried to include a diverse group of people as reviewers who have interesting perspectives on games, most of whom are authors in their own right. We tried to include people who would be likely to present thoughtful and interesting reviews that might foster fruitful conversations. If you head over to the blog and meet the Skeleton Crew (as we're calling ourselves) you'll see some of the people involved. They're a group of people whose work I have respected for years, and with whom I'm very excited to be working.

The idea isn't to create a single school of design, but rather for each contributor to maintain their own independent series of reviews from their own perspective. We will collaborate on some reviews, like our first review of the Isle of the Plangent Mage, but for the most part people will be selecting things to review and writing the reviews on their own. In short, the collective in question is a collaboration between otherwise independent reviewers. Don't think of Bones of Contention like this:

Our goal instead is to try to write reviews that provide information about and give visibility to products, but also say something interesting about retro or classic game design (for authors and DIY enthusiasts), each from our own perspective as authors and designers. We're also moderating comments in order to avoid the trollish comments and flame wars. I have moderated the comments here for a long time, without any loss in quality. (The worst thing to ever happen was I deleted a strange thread of comments in which Kent was making fun of a shirt I was wearing. On a typical day, the only thing I delete are solicitations for vampirism and sorcery.)

Anyway, check the blog out here and give it a follow in your reader, RSS feeds, on blogger, or however people are reading blogs nowadays.