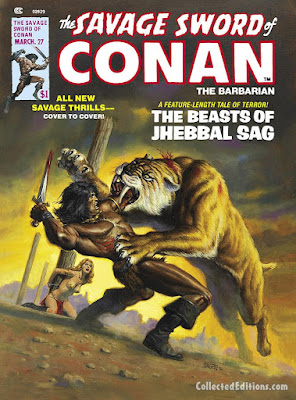 Gus' further elaborated his point by saying that a bear should be able to tear any PC to pieces. Part of his complaint about my system was that it didn't seem to deliver this result. I demur from his proposed test only a little. Think about the above cover Savage Sword of Conan, where Conan grapples desperately with some great beast. The design space I'd like to be in is one where a Conan, an advanced adventurer (4 HD) at the outer limit of human strength (+2), can try something like this, but only by stepping onto the knife's edge, i.e. at great peril. But I agree that animal attacks need further treatment, and I also propose some emendations to my grappling system at the end of the post to address his critique.

Creatures that pounce are frightening using these rules because they can ignore PC armor and get past bigger weapons. This already gives them a real edge. Here are a couple of further animal tags that I've developed for truly fearsome predators. If you have other ideas, drop them in the comments.

Maul: In grappling, automatic damage from natural weapons is not subject to disadvantage. Furthermore, on a success and the choice to wound, a mauling attack has advantage.

Drag: In grappling, on an immobilize result, the attacker can drag the victim half of their move. Good for hauling someone back into a cave, or snatching them up into a tree, or the air, or pulling them underwater.

Ferocious: In grappling, on a successful opposed grapple roll, the attacker choose to may deal damage against all who are grappling with it. (This makes it dangerous to try to mob the creature.)

Constrict: In grappling, one may deal damage to immobilized foes. One may grapple 1 foe of the same size, or up to 3 foes of smaller size, by grappling them on successive turns.

Swallow: With 2 successive immobilize results, the animal may swallow the opponent. A swallowed opponent takes 1d6 damage a round. They can only be freed by slaying the beast or otherwise cutting it open. 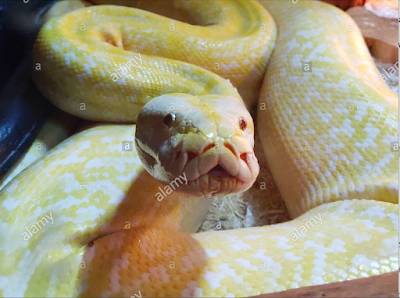 If we return to Conan vs. the smilodon from the comic at the top, we might stat it out like this (this is also a glimpse of part of what a statblock might look like for Jorune: Evolutions).

When this animal pounces on a normal sized PC,  they'll get one stab at it, and then will face a grapple with an opponent that has a +3 to their grapple check (+2 for strength, +1 for size). On a (very likely) success by the sabre tooth tiger, they will face a damage roll with advantage. Even on a failure, they'll take 1d6 damage. Devastating in a system with low hp and no variable weapon damage.

Conan has a strength bonus of +2. In the picture he has a close weapon drawn. So, although Conan is overmatched and will suffer a lot of damage, it is not impossible that he will prevail. Right on the knife's edge!

This is a nasty bugger. It can immobilize and constrict multiple foes by attacking each in succession. It can also choose to swallow immobilized foes. I think this would be a lot of fun to run.

These rules can also be used to simulate animal capture and taming, the breaking of horses, and so on. In the absence of a trap or a limilate (poison, drug) that might sedate the beast, the only alternative is to try to wrestle the animal into submission, bind it, get it to accept a saddle, etc.
To capture a beast, the party must immobilize it for 3 successive rounds of melee, using multiple grapplers to bind it: a net, shackles, rope, a saddle, etc. Keep in mind that multiple grapplers add to the total modifier on the opposed grapple check.
To break a rideable beast, use the same system but allow the grappler to test against strength or agility. Treat an immobilize result as staying on the beast. If the beast wins they will always break the grapple, throwing the rider as if the beast had chuko (i.e. for 1d6 with disadvantage damage). On the subsequent round after throwing the rider test the animal's morale. If they fail they will flee, and if they pass they will melee attack (trample) the rider. On three successive immobilize results, the beast is broken and will accept the saddle--at least from this rider.

Revisions to the System

Gus made some other helpful suggestions, having playtested related grappling rules (my rules are based on his, but have not yet been playtested). He suggested that I make damage from close and natural weapons automatic and not allow them to be nerfed by immobilizing a foe. If you grapple with a bear, you just will get mauled. Wayne Roberts also suggested being able to use agility (i.e. this system's dexterity) to wriggle out of grappling. I liked that suggestion too. Here are the changes in bullet point form, followed by a restatement of the rules.

A player can only grapple a foe that is at most two sizes larger than them. On their turn, a PC who can close with such an opponent can initiate a special grappling attack sequence. It works like this:

6. If either side still has a close or natural weapon at the end of this sequence, and hasn't done damage yet, they deal 1d6 damage with disadvantage to their opponent.

Once someone is grappled, other people can pile on by using their attack to grapple as normal.

Making Melee or Missile Attacks into a Grapple

Note that these unarmed proficiencies can be combined and stack. For example, someone might use chuko to reverse the strength bonus of an opponent, and when winning the grapple, use braz juju to inflict 1d6 damage with disadvantage on them.

This is a catch-all standing in for many different techniques, from brutal street brawling learned in the gutters of Ardoth to disciplined martial arts like mantis boxing.

This elegant fighting art involves using your opponents strength against them to toss them like a rag doll.

This ancient vicious fighting style involves coiling about your opponent like a serpent and inflicting the maximum pain.

It is rumored that there are other fighting techniques suited to the specific capabilities of different post-human species, but they are either obscure or positively proscribed in Ardoth.