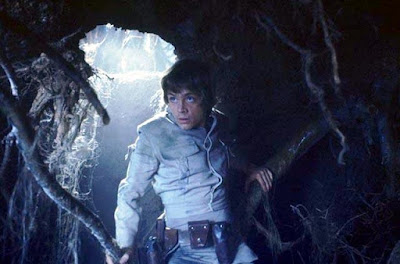 A young Jedi descends into an evil hollow to learn about his dark side. A paladin has broken a vow of her order, and wishes to regain her purity by embarking on a quest. A priest devotes himself to the study of a perilous branch of the holy law to draw new miracles from his faith. A monk has come upon a place of the ancients and wishes to meditate there to understand its nature.This is an open-ended system for engaging in spiritual exercises like this. It is part of a system of downtime actions, the other members of which are available here. The idea is that when in a safe place--a home base, a haven, secure camp, etc.--between adventures, a character may perform up to one downtime action, whatever else they do.

I have one player in particular who likes spiritual exercises. Here are two real examples from play. His earlier character was a heretical priest of Nepthylys, who at a certain point wanted to found his own pantheistic splinter sect by fashioning a holy eidolon of a perfect being. His more recent character, a former NPC with a mystical bent, encountered the (undead) shade of a brilliant former painter, who could not rest until he finished the self-portrait of himself that had thwarted him in life. The character wanted to meditate with the artist and provide spiritual counsel to overcome the block that had stymied him for more than a century. I think more players would do things like this if they were given a scaffolding that let them imagine it as a possibility. This is the system I wish I had had when he made those proposals to me.

A character of any class may pursue a spiritual exercise. To do so, the player must specify their goal. T'his will be the result if the spiritual exercise is successful. It can be vague, i.e. "receive guidance from my deity in this hour of need", "come to better understand my origin", or quite specific, "I wish to acquire the following mechanical benefit." They must also say through what spiritual exercise their character will be pursuing this goal. The goal and method of pursuit must be spiritual or mystical in a broad sense, although they need not be narrowly religious.

The dungeon master will first decide if the goal is feasible and the proposals makes sense given the character and the situation, informing the player if the goal is unachievable, or if it seems somehow implausible. There are obvious ways this could get out of control, for example by allowing a character to pray for a miracle that would mimic a very powerful spell far outside the reach of the character, like restoring the dead to life or healing the lame--especially if the character is not even a spell-caster to begin with! This downtime action thus requires a sensible DM and player, and  trust to work, so that the DM has the space (and confidence) to redirect proposals that are inappropriate. (As always, the dungeon master should try to be "yes and", offering possible feasible substitutes where the player strikes the DM as overreaching.)

Once a goal has been settled on, the dungeon master will next decide how big the tracker is that must be completed to achieve the goal using the guidelines below, telling the player how many steps it will take to complete their spiritual exercise. Only then will the player will then decide whether they wish to proceed. To advance the tracker, the player rolls 2d6, adding their wisdom modifier to the roll. On a 10+ the tracker advances one step. On a 7-9 the tracker advances one step, but the DM should introduce a complication. A complication may be a blockage in the spiritual exercise that requires some action to address, or the DM can ask the player to propose an inconvenient vow, or some disadvantageous condition during the next session.

Here are some rules of thumb and examples for the size of trackers: 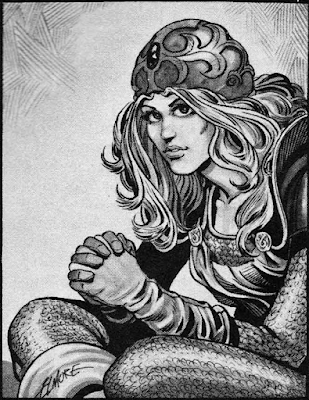 1 step: a result that is purely color, or a mechanically minor or ephemeral spiritual goal.  Example: a paladin prays to the Saint of her order to give her mastery over her fear when facing the spirits of the night, demonic beings that infest a broken tower to which her party plans to return next session. If successfully completed, this spiritual exercise allows her to re-roll a failed saving throw vs. fear against this specific foe for 1 session.

3 steps: a slight campaign goal, or a mechanically basic advantage. I would use this number of ticks for the player character spiritually counseling the artistically blocked shade; by meditating and advising a major NPC in a dungeon, the character can help them overcome their artistic block, and so release them to achieve final rest. (Were the NPC a throwaway or merely a bit of color then I would make the clock 1 tick.)

5 steps: a minor campaign goal, or mechanically moderate advantage. Example: a fighter with an alignment opposed to a magical sword wishes to struggle with the blade on the spiritual plane where it dwells. A successful completion of the spiritual exercise means that each will change their nature so as to become compatible with the other.

10 steps: a medium campaign goal, or mechanically significant advantage. Having proven his worthiness through service to the forest, the Old Man of the Wood, an ancient Ent, offers a gift in return. The druid proposes a spiritual exercise, asking him to instruct the druid in the secret language of bees. Upon successful completion of the spiritual exercise, the character may speak with bees at will and they will be favorably disposed towards him, considering him a true friend of their kind. (Note that to propose a 10 step spiritual exercise or higher, given that it grants a permanent power, there must be a strong reason in the game world why this makes sense, as for example, like the offer from the Old Man of the forest.)

20 steps: an epic campaign goal. A psionic character has learned through play that the ancestors of all with his gifts were invaders from the stars. He attempts to use his powers to access the shared genetic memory of his inhuman ancestors. If successful, he will learn the location and the method to open the generation vessel in which his ancestors arrived eons ago--the ultimate super secret dungeon of the campaign world for which every adventurer worth their salt is searching!