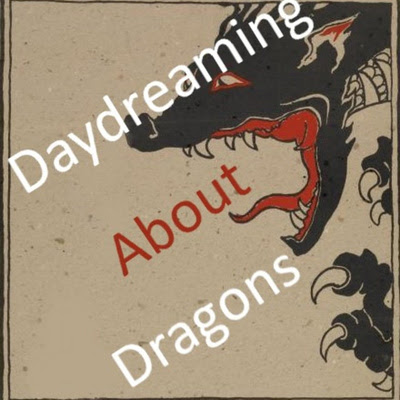 In this post, I want to talk about my favorite podcast, Judd Karlman's Daydreaming About Dragons. Karlman is the creator of the Dictionary of Mu, a super evocative setting book for the Sorcerer RPG. He's also one of the hosts of a very early RPG podcast called Sons of Kryos, which I've only started listening to. You can check it out on Youtube.

In Daydreaming About Dragons, Karlman spins out a topic freeform. The episodes are very short, generally reflecting on one thing that happened in a game, or one topic, e.g. "setting research", "the power of names", "ecology of the undead". The effect of his generous demeanor and his meditative tone, combined with his garrulous faux rambling is entrancing. Karlman often has something interesting to say, but my favorite episodes are ones where he spins out a fragment of a setting by riffing on a theme or illustrating his techniques in the moment. His imagination is wild, and to see it in action is a pleasure. Over time one gets a sense of his whole approach to gaming, which is probably the most valuable thing of all. Another thing I like about the podcast is that Karlman plays both retro and story games. As someone who is interested in that liminal space,  but is more on the retro-gaming side, I find his approach congenial.

It's about 50 (short) episodes in by now. If you haven't given it a listen, I can tell you where to get started. The order of episodes is a little chaotic on some platforms (Apple Podcasts, I'm looking at you!), since Karlman has "reply shows" that are not numbered, where he replies to listeners who have called in (using Anchor) between episodes. You should listen first to Episode 3. If you like what you hear, next listen to Episode 6.

Episode 3 is titled "Everything is Worldbuilding", by which Karlman means: everything is worldbuilding if you approach it in the right spirit. A corollary of this, dear to my heart, is that you can do all the worldbuilding you need without info dumps or walls of lore text, simply by making things players care about interesting and evocative aspects of the world. His main example in this episode is schools of magic and spell lists. Spell lists raise metaphysical and cosmological questions about the nature of magic and reality, and Gygax handled this by imposing his typical obsessive principles of order by repurposing grandiose synonyms for the sake of taxonomy, dividing the spell list into categories of evocation, abjuration, enchantment, etc.

Karlman's idea by contrast is to use the historical source of the spells as the principle for carving up the list. Karlman says at one point that he wants finding spells to be like finding arrowheads on an ancient battlefield and wondering, "What happened here?" In other words, they should point to history and draw players into the past conflicts of the setting by evoking wonder. Here are his spell types: (1) Hidden Caches of the Mage Wars, (2) Gifts from the Fey Queen ("when the fairy realms were in Spring, her laughter was like rain--she just threw off gifts, but now the fey realm is in Autumn"), (3) Fiendland's Relics (the spell books of ancient order of knights who worshipped devils), (4) Black Market Hobgoblin Cantrips (military camp spells, like boot polishing and potato peeling), (5) The Old Queen's Druidic Tomes, and (6) Gnomish Family Country Illusions. 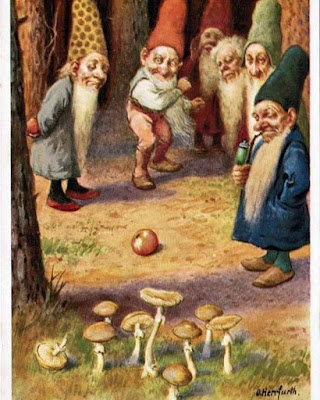 Just from the titles of the spell types you learn something about the world, the factions, and powers and potentates, and historical conflicts. If I were playing a magic-user in this game I would instantly be hooked. Can you imagine how much fun it would be when you find that first Fiendland spell book, and learn about the infernal knight who had it, and about his devil liege?

Episode 6 is about setting research. I'm not going to expound on it much, although it's my favorite episode, so you can experience it for yourself. I'll just say that in it Kalrman spins out two glorious settings in this episode, one from a single sentence, "The world is made of ash and blood," and the second from a single idea, "There is a city called Rose that was colonized by sorcerer kings." In the one case he starts with the magic system, and the other with the pantheon. His idea is that what you need to do in worldbuilding is not exhaustive research or interminable cataloging of "setting information", but rather you should find little evocative nuggets, which he calls "your apple pie". You can spin out this little evocative ideas into a badass setting through daydreaming and riffing on a single theme.

This rang true for me, because it's basically how I came up with Zyan. I had one post where there was a single entry on a random table I had written for my home game about what appears in a tear in reality leading to other worlds. This single entry said that the portal opens on an inverted alien jungle that hangs from the bottom of a flying city in the dreamlands. When I turned this into a campaign premise, I had just one other evocative idea (my apple pie): that a door to this city of the dreamlands had opened a century ago, and that everyone knew about it through the fairy tales told to frighten children. So I daydreamed about this city of the dreamlands seen through the lens of children's fear. Naturally, I hit upon the idea that everyone in the city wears a mask, and that they use puppets to punish people for being naughty. I then asked myself questions like: what kind of a pantheon would they have in a place where ordinary life was a masked carnivale? What would the law be like in a place where there was punishment by puppet? Is there a puppet deity? So Zyan was born.

So anyway, check out the podcast if you want. It's cool. I got myself a honking Blue Yeti microphone that looks like a prop from a Call of Cthulhu larp. So maybe I'll start a podcast myself one of these days. Who knows? 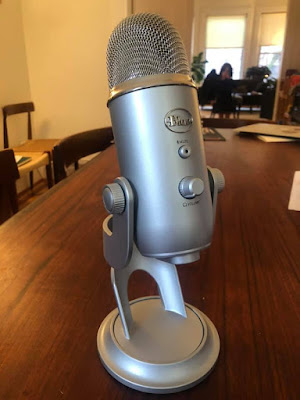