How are Issues 1 & 2 of Through Ultan's Door Connected? And other news 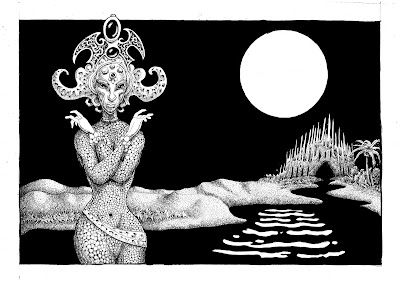 
1. DriveThruRPG has finally approved the PDF of Issue 2 of Through Ultan's Door. You can now purchase electronic copies of the zine here. 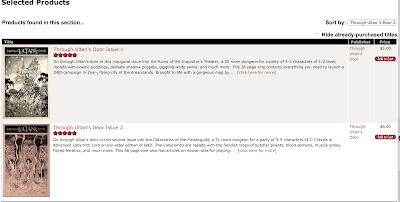 2. I have heard the voice of the people, and chosen to add shipping directly from my Big Cartel store to Canada. Note: it is not really any less expensive than buying it from the Melsonian Arts Council, and I'm not sure how much faster it'll get there. But should you want the option to buy it closer to home, you can now do so. Everyone else outside the U.S. should go to The Melsonian Arts Council.

Originally, I had been planning on including a map of the sewer river with issue 2. But it's a point crawl map, which necessitates descriptions of quite a few nodes, and a big old encounter table. It proved to be too much material to include in issue 2, and I decided to bump to issue 3. I was also encouraged to do this because Gus drew a crazy great map of the sewer river that really fired my imagination. So this made me want to give it the space to breath in an entire issue. This has produced the awkward situation that I'm giving you a second dungeon on a pointcrawl map without giving you the map or rules for transit between destinations. C'est la vie.


I will try to rectify this by making some more material about the sewer river available here in advance of issue 3, which is, naturally, still a long way off. But it's worth saying this too:

The Ruins of the Inquisitor's Theater is intended as a slow burning entree into the strange world of Wishery that lies on the other side of Ultan's Door. The Catacombs of the Fleischguild is different. While it "lifts the curtain" on further mysteries of Zyan, it is much more of a self-contained "jewel box" of a dungeon. For all its implied Zyanese theology and culture, it is more amenable to being dropped in to existing campaigns without the aid of Ultan's door to the dreamlands. Of course, for me, it is and always will be part of Wishery. But the waking world is full of echoes of Wishery (or is the other way around?), so perhaps this dungeon can find its way directly into your Living Greyhawk or Duskvol or City State of the Invincible Overlord. I would be the last to imagine that I could contain such phantasms by placing them on a map.
Posted by Ben L. at 9:18 AM

Labels: Catacombs of the Fleishguild, Ruins of The Inquisitor's Theater, Through Ultan's Door, Wishery, Zines