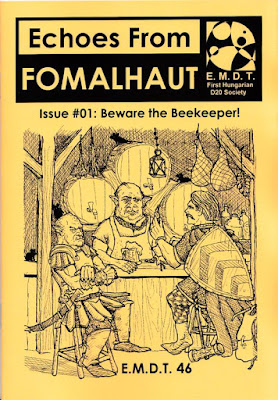 This is a review of the first issue of Gabor Lux's zine, Echoes of Fomalhaut. For those of you who don't know him, under the moniker Melan, Lux was a valuable contributor to early OSR conversations. He has exquisite taste if you like swords and sorcery running towards the weird. To get the flavor his imagination and bursting creativity, check out this thread about his creation of the undercity of Khosura. He has an English language blog primarily dedicated to reviewing old school modules. You can see a great recent interview with him on False Machine here. And now he has launched a zine.

While I have more nuanced things to say below, the basic message is: it's packed to the gills with fantastic stuff. It has the spirit of the best early Judge's Guild stuff and a quirky sword & sorcery flavor. If you like that sort of thing you would be a fool not to buy it. You can get print versions of the first two issues here and PDFs here. I gather the third issue is on the way soon.

The first issue has a random table of merchants, a section on house rules about morale, a massive selections of philtres and dusts, and no less than 3 adventures, including one, Beware The Beekeeper, with 49 numbered areas! Furthermore, the first issue comes with a large, folded player's map of an unnamed city, printed on nice vellum. Talk about value for your buck. 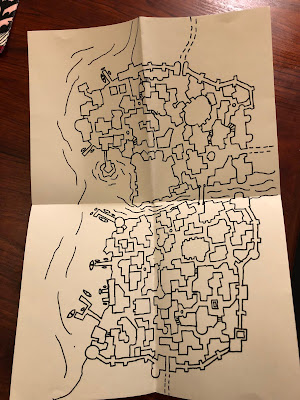 The table of merchants is wonderful. There are a total of 100 million possible combinations. Many results are themselves excellent adventure seeds, e.g. "A distracted judge pursued by a mummy is selling titles to a kingdom" or "a dull prostitute is selling snakes to ruin a competitor". Others are just very flavorful, e.g. "A paranoid vagrant is selling a shave, now on sale!" The next time I run the City State of the Invincible Overlord, I am absolutely using this table. The philtres and dusts are useful and flavorful as well. For example: "Dust of the Radiant Sun (400gp): a golden granule resembling finely crushed glass, the particles of this dust can be hurled into the air, where they stay afloat and become pinpoints of searing heat. Passing through a field of particles does 3d8 damage. The dust settles in 1d6 hours." Woah, how cool is that?

The biggest dungeon in the zine is Beware the Beekeeper. It is set in the Singing Caverns, so called because of the sound the winds make blowing through the three cave mouth entrances. It has a strong British Fighting Fantasy aesthetic. For example, one of the cave mouths into the dungeon is blocked by a door with three faces that can all be rotated for different effects. When I read the passage I just hear in my head, "If you twist the angry face, turn to page 243. If you twist the sleepy face, turn to page 12. If you twist the sad face, turn to 131. If you wish to retrace your steps and try another cave mouth, turn to page 44." On the first level, there are the chambers of a mad druid (the Beekeeper) accompanied by swarms of bees, a tavern run by orcs complete with menu options, and on a lower level, a bandit layer and some forgotten antique bathes. The dungeon is full of nice little touches, like this piece of treasure: "A discarded piece of brass hammered into the crude likeness of a fish is magical, and will make for a spear +2 if mounted on a shaft." I ran if for my son and his friends just the other day and it was fun.


The zine contains two other adventure locales. The first is the Red Mound, a wonderful little adventure locale, with only a few places to visit, but each containing further adventure seeds. There's a potent but cursed sword, a hidden portal to someplace perilous, and a forgotten god whom one can serve. I like the idea of this kind of adventure locale, where it provides a series of flavorful hooks and seeds to be further developed by the DM. It would be a neat recurring feature in a zine, maybe called "Seeds of Adventure".

The last adventure, The Mysterious Manor,  is a bridge to the setting introduced in issue 2 of the zine. In fact, there are many bits and pieces of it that you won't know the full import of until you read that later issue. For this reason, I actually recommend reading it after you have read issue 2. My view is that this adventure, while containing some excellent material, is not quite as gripping as the other two. A pirate's gang of humanoid baddies have holed up in a mansion over the haunted crypts of an ancient family, the Bonifaces. The pirate's gang part is interesting, because Lux's humanoids have more varied and nuanced motivations than typical orcs, so negotiations or subterfuge will possible and prudent. Their cultist pirate boss is certainly cool. But still the upper levels didn't grab me especially, nor did the mystery of the haunting on the lower level. I had a little trouble imagining why a party would poke around here long enough to uncover the mystery, nor did the denouement seem as compelling as it might. Given how much other great stuff there is in the zine, this near miss is not a serious complaint.

A more serious if churlish complaint about the zine is that it has too much stuff in it. At certain point, through no fault of the material, it all blended together in my mind. This was abetted by the fact that the first issue is really committed to its zinish-ness: the type is tiny and uses a standard font; the layout is utilitarian; there is some decent (but not inspiring) new art, but not much, mixed with public domain images; and the maps, while pleasing in their design, and having a certain charm in execution, also look kind of scrawled. 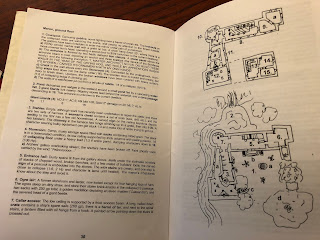 The walls of tiny text, unmediated by principles of graphic design, eventually induce a sort of trance state that Lux works hard against with his quirky and delicious imagination. It's also true that the adventure locales in the first issue have nothing to do with one another, or with a common theme, and this also makes it hard to hold the whole thing in your head at once. It's hard to complain when someone is clearly focused on giving you as much usable and flavorful content as they possibly can without getting hung up on further distractions. But I wish Lux cared a little bit more about conveying his vision through artwork and layout.

The second issue suffers somewhat less from this problem, not because it's shorter--it's longer!--but because it is centrally focused on presenting a setting, and one city in that setting, Gont: Nest of Spies. So it has a kind of unity to it that focuses the mind. And Gont is a great city that channels the City State of the Invincible Overlord to excellent effect. But in the interest of actually having this review see the light of day, I'll have to save my thoughts about issue 2 for another time. In the meantime, buy this truly excellent zine now!