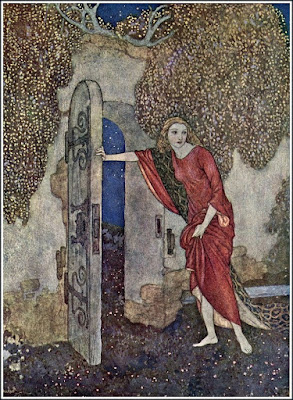 Today marks the two year anniversary of the first session of my dreamlands campaign Through Ultan's Door. It was two years ago to this day that a Storm Rider paladin, a red-skinned Altanian thief, a merchant cleric of the spider god Nepthlys, a midget named Failure, and an obsequious torch-bearer named Selwin crowded into that small space under the stairs in the back of Ultan's print shop. There they passed through that improbable cerulean door, leaving the waking world of the Wilderlands of Ruined Ghinor for the undercity of Immortal Zyan, the flying pearl of Wishery.

Our 50th session is scheduled for this Thursday! So far eighteen different players have joined in the adventure, playing a total of twenty three characters. Zyan has snatched life from five PCs, including the Storm Rider and the merchant priest, and more than a dozen hirelings, including Selwin, who managed to climb all the way from nothing to become a second level fighter, before was slain by the defenses of the legendary hanging Summer Palace.

Since I've posted no play reports here (I save those for the game's G+ community), I thought I would take this occasion to say something about (part of) the campaign. This is also a preview of some of the material I've been developing, which, I promise, one day will be yours if you want it.

I divide Zyan into three parts. First is Zyan Above, the flying city that rests atop the rock of Zyan. It is a cursed and decadent city of the dreamlands, surrounded on all sides by the howling winds of the Endless Azure Sea. Below that is Zyan Between, the sewers and undercity of interconnected catacombs, temples, and guild holdings, a few still in use. Further down hangs Zyan Below, an inverted white jungle of fungal blooms, springing from the bottom of the rock of Zyan. It is a deadly wilderness crawl, consisting of four stacked hex maps. Taken together, Zyan thus consists of the three main modes and locales of old school play: a city crawl, atop an underworld full of dungeons, atop a wilderness hex crawl through an alien jungle.

Although the campaign has a strong setting, I have tried to run a completely open world, using the 1 GP=1 XP rule as the normal motivator for scumbag adventurers. Many hooks have been dangled, and the party has taken some, and passed up many others. For example, the party has long (for 20+ sessions) had an easy path available to Zyan Above. However, their attention has been elsewhere, pursuing lucrative and pressing leads in the white jungle. In the last session, they declared, to my immense delight that they would not enter Zyan Above until they could do so as kings. They learn constantly of the city, but always through its echoes. It is as though Zyan were constructed out of a combination of hearsay, old Piranesi prints, snatches of poetry, ancillary archaeological sites, and images seen in a funhouse mirror. (How else would a city be built in Wishery?) As a result of this open play, the player's actions have upset the balance of several factions, and brought a trail of consequences I could have never have predicted. Things are, at the moment, balanced on the knife's edge. Which is a good place to play D&D. 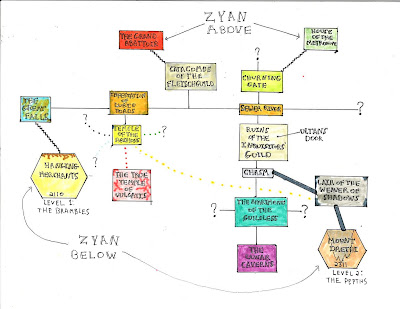 This is a point crawl map of Zyan Between, insofar as the players have explored it. The solid lines connecting the points on the map represent spatial connections along cardinal directions between locations, usually with nominal travel times. So, for example, the Chasm is just at the southern edge of the Ruins of the Inquisitor's Guild, and right across the chasm begins the Apartments of the Guildless.

However, this map also contains what +Beloch Shrike  has called "flux spaces",  massive underworld environments that PCs move through in an abstracted fashion. There are two of those: first the sewer river that winds from Zyan above, down through the undercity, to spill ultimately at the Great Falls into the white jungle, and second the Apartments of the Guildless, a Red Nails style wilderness of arcades, courtyard, apartments, and stone garrets that sprawl in all direction. To move along one of these flux spaces to the next node involves making two encounter checks. If an encounter ensues, I roll on two tables. The first gives the lay of the land, setting the scene for the encounter in these massive environments. The second is a big old encounter table that includes monsters and NPC, found objects or locations, and events. So, for example, if the part is moving through the Apartments of the Guildless south to the Lunar Caverns, I roll two encounter checks, and if I get one I roll first for where the encounter happens (e.g. "A sunken arcade with walkways to abandoned rooms above. It is dotted with planters choked with strange black vines"), and then for what the encounter is (e.g. "A band of mute guildless mold foragers, leading their eyeless hounds on frayed leashes.") 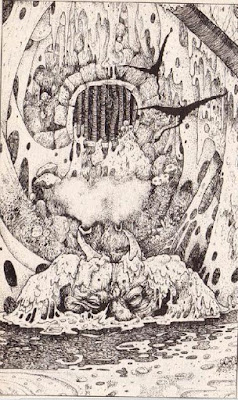 The map also contains two kinds of connections between different levels. One is the shaft that leads down from the chasm ultimately to emerge from the side of inverted Mount Drethi in the second level of the white jungle in Zyan Below. The others are the stairs that lead either up from guild holdings to emerge in buildings located in different neighborhoods in Zyan Above, or down from the great falls to the pagaodas of the hanging merchants in the first level of the white jungle. Also shown on the map are five dimensional portals in the Temple of the Archons that lead to spaces holy to the strange deities of Zyan.


The Ruins of the Inquisitors Theater


Ultan's door, the sole point of connection between the waking world and the dreamlands, opens into the ruins of the Inquisitor's Theater, the first of the dungeons to be explored by the party. This was once a holding of the Inquisitor's Guild, worshippers of many-headed puppet queen Afatis, representatives of the crooked and baroque law of Zyan. It contains, among other things, a sacred punishment theater for the inquisitor's terrifying and exquisite puppet shows. When Ultan's door first opened, this theater was a nest for a great mother sow of sinuous white swine. 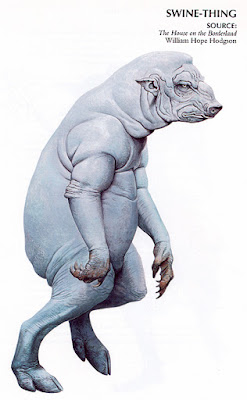 
If one wanders south through the apartments of the guildless, eventually one will stumble upon a massive door of beaten copper. On it is the image of a woman wearing a crescent crown. At her breast suckle old bearded men who clutch their stomaches in agony. Beyond these doors the dreamlands of the moon predominate. Here, flora and fauna from the fancy of moon dwellers grow. The Armigers (moon knights) stand constant watch over a black seal they set long ago to imprison a lunar demon.


Merely cross the sewer river form the Ruins of the Inquisitor's Theater and one will find a strange gate. It is an archway carved from green stone. The top of its arch is decorate with the torso of a woman wearing a blurred mask with four arms. Within the arch, a lone figure is suspended, one of the wretched guildless who decades ago drew too close to the gate's dangerous weave. He is spread out in space in constant frozen movement, like a living futurist statue. Beyond can be seen an immense corridor of green stone, carved with flowing geometrical forms. 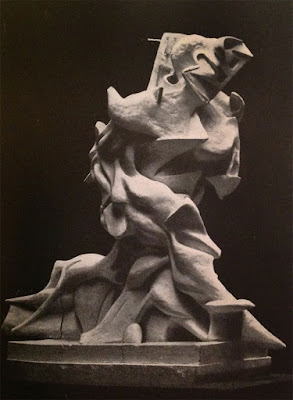 
Travel downstream on the sewer river from the ruins of the inquisitors theater, and you soon hear a buzzing and be greeted by a charnel stench. If you press on, you will reach the chum spouts, where effluvia from the endless sacrifices of the sacred butchers of the Fleischguild pours into the sewer river from the mouths of grotesquely carved heads. Between these gruesome spouts, two sets of narrow stairs lead up into the catacombs where the carvers and flayers of the fleischguild are interred. These halls are guarded by the gory dead, and by butcher's traps and organic witchery for which the Fleischguild is legendary.


Temple of the Archons

Travel further down the sewer river and the waters rise higher. A host of lurid toads have secreted a nest of sacs in the echoing cavern and dammed up the river with slime. They extract tribute in flesh from those who wish pass through. At the back of their flooded cavern, improbably high doors rise. These lead into the long abandoned temple dedicated to the Numinous Game, the inscrutable contest of the opposed Unrelenting Archons, alien deities of the queer Zyanese religion. In a sunken area in the center of the temple, stands an enchanted wooden replica of Zyan Above, the board across which their game is played with human lives. Shrines to each of the five are ringed about the perimeter of the temple. Each of these shrines is itself a gate to a space sacred to the relevant Archon. Our daring adventurers have opened only two of these gates. One leads to the lair of the Weaver of Shadows, beloved of the Archon Azmarane, who plays his occult web like a harp, spinning from its resonances shadows to slay his prey. The other leads to the True Temple of Vulgatis, a demonic interplanar church dedicated to the archon of unseemly and fecund growth.

Labels: Point Crawl, the Hobby, Through Ultan's Door, Zyan Between