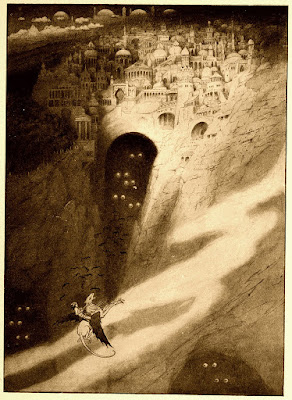 To the casual observer, it looks to be a normal day in Rastingdrung. As the long afternoon dwindles in the palace, manservants hurriedly polish the silver, while cooks sweat and curse, struggling to meet the Chatelaine of Storm's elaborate culinary demands. In the Temple of Ulim, church prostitutes ready themselves for another night of service in the pleasure chambers and gaming rooms above, while in the Silent Halls below, the Scarlet Censors draw up the newest list of proscribed activities intended to forestall the latest imagined heresies. Honest Rastingdrungers, lumberjacks and fishermen, return to the city, exhausted from a long day of toil, showing their black seals and matching their names to the rolls as they pass through Bishop's Gate. But amongst the city's less savory elements--criminals, poets, heretics, and thrill seeking scum--a whispered rumor has begun to spread. A printmaker named Ultan, while laying poison for rats in his shop just off the Square of Eidolons, is said to have come across a door under his stairs. Word has spread quietly that Ultan is charging 10 gold pieces a head for entrance, no questions asked. 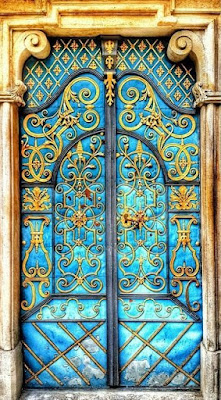 This printmaker claims that this doorway was not there as recently as the previous day, and, even more implausibly, that it leads to the sewers of Zyan, the infamous floating city of Wishery. From reckless uncles or cruel nursemaids, all children learn the stories of Zyan, the city of porcelain abattoirs. They learn with remorse and fear about the sacrifice of naughty children to alien gods by its masked citizens, and with morbid curiosity about the deadly puppet shows of that strange city, ample sustenance to nurse their nightmares. Stories of a more fantastic and picaresque variety are shared over whiskey and bitter tea about the lush bowers of the inverted white jungle that dangles from the underside of Zyan, home to ferocious beasts, its thick foliage said to hide lost hanging temples, the lairs of seductive lamia.

If Ultan's claims prove true, such an opportunity come once in a lifetime. The last door appeared a century ago, surfacing incongruously on the oily waters of Lake Wooling. It remained open for only six months and a day, time enough for Garanax, then champion of the Chatelaine, to return from the dreamlands with a mated pair of the monstrous velvety Crows that serve now as mounts for her dread Storm Riders. Although neither a pioneer of esoteric pleasures nor pious observer of the sacraments, for his achievement he was sainted, over the clucking of the Priests. To this day the bright carvers fashion the effigy of Garanax, Saint of the Crows. At the Festival of the Sybarites, he is one of the most popular floats.


Who knows how long the door will remain open this time? If you wish to pass through Ultan's door, I am running weekly games on G+, Thursday nights from CDT 830pm-1130pm. We will be using Labyrinth Lord with the Advanced Edition Companion rules. New first level human characters only, 4d6 down the line. I will post some additional classes and house rules on this blog shortly. The game will be set in my Ruined Ghinor, which you can explore under that label on this blog, although you don't need to.

EDIT: The campaign now has a community page: Through Ultan's Door. All invites and campaign posting will happen there. Drop me a line on google+ and I will gladly send you an invitation to the community.