The party consists of three clansmen who wear the pelts of the great grizzly they slew together in their youth, and one foreigner. The clansmen are Ike the Bloodhorn (ranger 4) who carries the bow Farslayer, Gibs-Golax (fighter 3) who swears allegiance to no man but himself, and Ildrev (druid 4) an uncanny acolyte of the All-Mother who speaks the tongues of beasts. The foreigner is Itash (Illusionist 3) who knows many ancient secrets and can bend the minds of men. 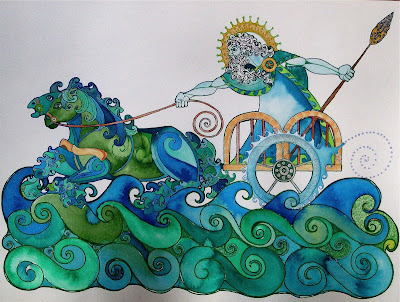 They have traveled to the seaside town of Wolsdag to take in the Festival of the Longtide, and put together a crew to sail once again to the ruin-choked shores of the Shattered Isles. Upon arrival they are invited by old friends to the inner shrine of the Temple of Manannan to witness the sacred rights. As night falls and the crashing waves of the long tide mount, people crowd into the narrow and smoky subterranean space. Here the temple opens directly to a sea cavern, into which marble steps dramatically plunge. The sacred torches that burn year round are lowered into the waves where, having kept their watch for a full year, they finally sizzle into darkness. The phosphorescent mosaics, invisible in the torchlight, spring to life in psychedelic colors. They reveal the three stages of the history of man. One wall is taken up by a representation of his languid and joyous dwelling in the opulent, immortal, submarine gardens of the Ancient of the Sea. The next wall is taken up with his transgression and exile to his terrestrial prison. Many ages of suffering are depicted her, full of warfare, hunger, slavery, pestilence and death in his great airy grave. The third wall reveals the day of judgment, when the waters once again swallow the unnatural land, and the righteous are welcomed back to Manannan's side while the wicked drown gasping for air.

After the interminable dolorous confessions of the congregation's sins, they receive forgiveness form the priests of Manannan. One by one they joyfully shed their awkward land garb, and are welcomed naked into the sea, where they swim through the submerged cave out into the air of the secluded beach where the festivities are held. Here among the crashing surf they break their fast, feasting and drinking late into the night with great lascivious abandon.

The next morning, the party is awoken far too early by an apprentice Tempter from the Merchant's Guild. They have been invited to lunch with Guildmaster Horvo in the cloistered pagodas of the secretive hall. Curiosity piqued, they make their way wincing and cursing up the stairs to the hilltop at the center of Wolsdag. They enter the lacquered chambers of the hall, passing the massive carved doors of the temple to Nepthlye and are escorted up the stairs and out onto the pagoda, with its hanging vines, dappled light, and lily ponds. They are led to the corner where Guildmaster Horvo is ensconced. 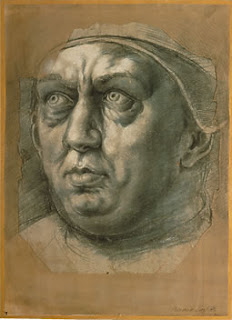 The party, intrigued but wishing for more intelligence, turns to their comrades among the free mariners and the enterprising faction. From the mariners they learn that after the naval victory, the society of the picture men has collapsed as a result of the astounding defeat, and the various tribes have descended into a bloody civil war. They learn that there is one picture men town along the coast between here and the dunes, Kom, a fishing village two weeks up the coast. When they speak to the enterprising faction they learn that they are bitter about the new monopoly routes opening up along the coast, since previously there was plenty of lucrative unlicensed trading with pictured reavers. They also learn that no one goes in the strange mists, which have a sweet smell as of persimmons, and obscure waters attended by wild currents, with many uncharted reefs and small islands that spell doom for ships. About the dunes themselves, they learn only that the picture men treat them as a holy site full of demons and spirits, and that they are forbidden to enter them. Since the dunes lie deep in hostile territory, they are unexplored by Wolsdagers. There are, however, some wild tales of travelers emerging laden with ancient treasures.

Liking the sound of all this, the party uses guild funds to procure a huge sea canoe, and a smaller canoe for reconnoitering. They procure provisions for the trip and seek out an old companion (hireling), a sardonic archer but the name of Crow, who was the sole surviving hireling of their descent beneath the waves to explore the Submerged Spire of Sarpedon the Shaper. And so, on one clear morning, their spirits high, they set off into the ocean in a giant sea canoe, towing a smaller vessel behind them.