Two Approaches to Sharing the Screen 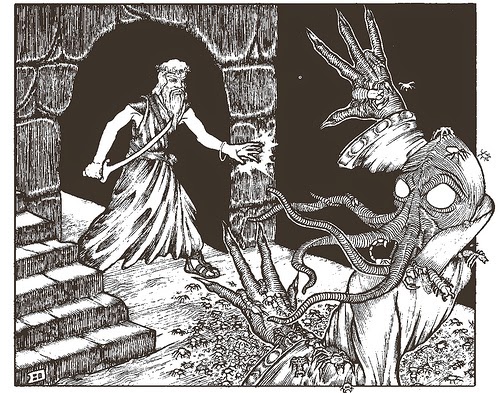 In my last post I discussed sharing the screen with three rotating DMs in a single campaign. A conversation with +cole long on G+ got me thinking about some of the problems with rotating, how we were dealing with them, and what alternatives there were. Here I discuss an obvious problem with DM rotations, and two different ways of handling this problem. They would give rise, I think, to campaigns with very different flavor.

When I refer to DM rotation, what I mean is that everyone in the group plays, and everyone has the opportunity to DM, all in the same campaign. This can be contrasted with co-DMing, where the roles of DM and player are fixed in the traditional way, with two or more people in the role of DM cooking up together the campaign world and adventures. Rotating has some advantages over co-DMing, since playing and DMing have distinctive pleasures, and it's nice to get to regularly experience both in the same campaign. In our campaign, I find that I learn a lot by playing under the other DMs in the group as they work their magic (and sometimes fail to work it). Also, since we spend less time "on" as a DM, there's less burnout, and a more equitable sharing of the preparation. (We're three years in and going strong.) But most of all there's the sheer pleasure of making a thing together. It's a higher degree of creative unity than a traditional fixed role arrangement provides. We build a campaign world together, all as players and, at least potentially, all as DMs. It's a lovely thing.

The two approaches I have in mind arise as responses to a special problem that DM rotation presents in light of two elemental joys of D&D. The first joy arise from genuine player agency. In the kind of game I like to play, a great deal of the fun comes from the fact that the world is open to the players. As a player, I want to be deciding where I go when and what I do when I get there. This is why, for me, the ideal campaign will always have the structure of a sandbox. It need not involve a literal hex crawl across an open map--maybe it centers on court intrigue and planar travel--but it needs to involve equivalent combination of structure and potentially infinite open endedness. The world is our playground with the limits set only by our shared imagination.

Another of the great pleasures of D&D is the uncovering of secrets. By design, an informational asymmetry exists between the dungeon master and the players. This is the source of great fun. When my group stood on the parapet of Submerged Spire of Sarpedon the Shaper, looking down beneath the waves at the tower below them, there was a sense of tension and anticipation on their part. They were embarking on a thrilling journey into the unknown. As DM I shared in that pleasure from the other side. It delighted me to see them deliberate about how to enter the Spire (e.g. should they take the stairs down from the bell tower, or plunge down to the base of the keep and enter from another level? etc). Similarly, knowing about the mad laboratories in the inner precincts of the dungeon was fun for me from the get go, and it would have been fun even if they had left the dungeon without having discovered them, or had left for the moment to return in a year's real time. From one side the pleasure in question involves involves cooking up secret wonders, and mapping undiscovered countries; from the other side it comes from the sense of anticipation, from exploring, probing, discovering.

The problem with rotating DMs is that these two elemental pleasures come into tension under this arrangement. For example, suppose I cook up the Submerged Spire and the players partially explore it. During some other DM's turn, the players (including me) decide they want to go there. How's that going to work? If I have to share the map and key of the Submerged Spire with the other DM, then I reveal my secrets to him. But now I'm also a player going into the Spire. I have to pretend I don't know what's coming and that's no fun. Indeed, the point generalizes; it's not just about maps and keys. Suppose another DM sets in motion a chain of events. We have learned that the white pods of the Moon Lich have crashed into the Screaming Hyena Jungle, somewhere near the lost City of the Archivists. Is this an advance force, scouting for an attack? Does the Moon Lich seek something slumbering within the lost city's precincts? Presumably the DM who introduced this event knows or has some ideas. But suppose we don't figure it out for now, and we switch DMs. And suppose then we head off to the jungle. You see the problem.

It seems to me that there two ways of handling this problem, each of which comes at a cost. The first involves sacrificing some player agency. Here the general approach is to collaborate on a campaign by dividing and conquering. Each DM is encouraged to take responsibility for some portion of the setting by introducing locations, central NPCs, and chains of events that are his own. While there is room for endless cross fertilization, borrowing, and mutual influence, these elements, once introduced, are the presumptive property of the DM who introduced them. If you're going to the Submerged Spire, then I'm your DM. If you're going to try to go up against the minotaur Malveraux who slaughtered Pierre's character, then Winston is your man. This can be accomplished on the side of the players by having a norm that they will only interact with something that belongs to one DM during that DM's turn. This is a cost because the balkanization of the campaign world introduces an artificial limitation of player freedom. (This is the approach my group uses. It works well, and is a viable solution, but I definitely feel the loss of agency that it introduces.)

The alternative approach that I've been thinking about this week resolves this tension in a different way, by sacrificing, to some extent, the pleasure of keeping secrets. Here the central concept is campaign canon. Something is canon if it's an established fact that has been encountered in play. For example, if the players have been to the second level of the Submerged Spire of Sarpedon the Shaper, then the map, layout, and contents of that level are canon. Similarly, if we have learned that the white pods of the Moon Lich have landed in the Screaming Hyena Jungle, then that too is canon. On this second approach, what passes from DM to DM is canon only. Supposed the PCs don't explored the bottom level of the Submerged Spire that I created during my turn. Suppose that they return at a later time, during another DM's turn. At that point, the DM works with the map and location as it exists in canon, but is free to put whatever he wants beyond the last closed doorway. Then, when I go as a player into my own dungeon, I have no idea what I'll find. Player agency is thus perfectly preserved. But it does come at the cost of wiping clean the geography of the undiscovered country that each DM may have created. The secrets count for nothing when the DMs rotate; canon is everything. Longterm slumbering secrets would not really be a viable option, since everything is always up for grabs. Here we see the same problem resolved in the opposite direction from the divide and conquer approach.

I haven't tried this second alternative, but I think it could be a real blast. It would be great fun to see another DM take something I made and spin it out in a direction that I never anticipated. I suspect that it would naturally produce some interesting dynamics. For example, it would certainly encourage DMs not to prepare too far in advance. I suspect it would also lead DMs to introduce evocative hooks that he would enjoy seeing other people develop. I bet there would also be a premium on elaborating canon in a surprising way, and I might expect a competitive dynamic to develop with DMs vying to take one another's material in a strange and wonderful direction. But then I don't know, since I haven't tried it.

(a) A paragraph long description of the setting that captures the aesthetics, genre inspirations, and main themes of the campaign world.*

(b) A campaign map. This can be a hex map for a sandbox, or a looser world map of some kind.

(c) A barebones description of the campaign base and its immediate environs.

*For example, "A sword and planet campaign set in the final days of the dying sun. Vast graveyards from the Draftsmen Wars dot the landscape, their technological horrors slumbering, as a dwindling mankind turns ever inward, languishing in highly mannered, hierarchical societies. Imagine it as sort of a fusion of Jack Vance's Dying Earth and Rifts."

The Divide and Conquer Protocols


(1) Everyone is a player, and everyone has the opportunity to DM.

(2) A schedule will be fixed in advance, giving everyone a chance to DM who wishes to do so. Alternatively, volunteers can be solicited towards the end of a DM's rotation with preference being given to those who have not DMed before, or have not done so recently.

(3) Once a DM has introduced a major setting element, including an adventuring location, NPC, or chain of events, that element is considered his.

(4) Players may do anything they like in the world, except interact in a significant way with the property of a DM who is not behind the screen without first seeking his permission.

(5) A DM's typical rotation will have an expected length suitable to your schedule and the number of DMs who wish to participate. In our group, the expectation is 6-8 sessions per rotation. When the upper end of that limit is being approaches, players and DM will voluntarily allow adventures centering on the current DMs property to wind down.

The Canon is Everything Protocols


(1) Everyone is a player, and everyone has the opportunity to DM.

(2) A schedule will be fixed in advance, giving everyone a chance to DM who wishes to do so. Alternatively, volunteers can be solicited towards the end of a DM's rotation with preference being given to those who have not DMed before, or have not done so recently.

(4) When DM rotations occurs, all that is carried over to the next DM is campaign canon. Canon is defined as fact that has been established through play. DMs are free to treat what is not yet canon in any way they like.

(5) Players may go anywhere and do anything with any DM.

(6) The length of a rotation can be fixed by arbitrary fiat, or by social consensus. I would suggest starting with the presumption of 6-8 sessions per rotation.*

*In theory, using the Canon is Everything Protocols, you could rotate DMs as frequently as you like, even every session. I suspect that this would produce an experimental quality to the game that would probably be a buzzkill once the novelty wore off. It would also be a bitch to rotate in new PCs every session. How did they get there?