So, Dungeon23 is rolling along. I haven't posted a second batch myself for reasons I'll mention at the end. But that doesn't mean I haven't been eagerly reading along! There are some really wonderful things, including some real surprises. One of the real joys here is discovering new people and new blogs.

First up, I think needs to be the fact that Amanda Lee (@annabelle_lee), author of Garbage Barge and Vampire Cruise, made this glorious thing. (This covers the first two weeks.) It makes me kind of dizzy to look at it but I love so much.

Michael at Sheep and Wizardry is off to a rollicking good start with The Sunset Palace of the Starry Sultan, built and rebuilt by each successive monarch, creating an "ever-expanding labyrinth of tangled opulence and pointless pomp." I love the idea that you would start a delve into this megadungeon by sneaking through the tiny occupied portion of the palace. His first post has some neat character backgrounds that deftly build a playable 1001 Nights pastiche. His second post has really great faction play right from the get go including a treasure guarding mummy and his goose, agents of the Gutter Kings (in service of the Crown of Buttons!), a cult of star seekers, and more. This looks like it will be a fun and meaty dungeon.

Arnold at Goblin Punch did it again. This post details The Flying Birdcage, a whole house inside a flying birdcage located in the complex form week 1. The Flying Birdcage is probably the most interesting and clever form of quick transportation (a staple) around a megadungeon I've ever seen. I would be SO EXCITED to have unlocked the secrets of the birdcage if I were a player. (Since publishing that he's gone on a bender of rapid-fire posts about dwarves, puzzles, and other setting elements like it was 2015. I think we can say now that Goblin Punch is back baby!)

Speaking of ways into and around the dungeon, in his inaugural post, Rowan at Dodecahedron details 100 flavorful dungeon entrances. Many of them are secret entrances or have some kind of gimmick that makes them enjoyable. "A bronze statue of a massive fish, mouth agape, emerges from a river. Ladder rungs within the statue lead down through the stonework cylinder that supports it." It's a real treasure trove of ideas that may be of use.

Nick at Underworld Adventurer has produced some real gems in their second meaty post about their megadungeon. Probably my favorite bit comes in the very first room of the post, which is a hall of portraits of past head wizards of the Transcendental Congress. Each has an illustration, and a personality, and is ready to bargain their secrets for something from the dungeon! A lot of lore baked into immediately engaging weird NPCs that also manage to point deeper into the dungeon. 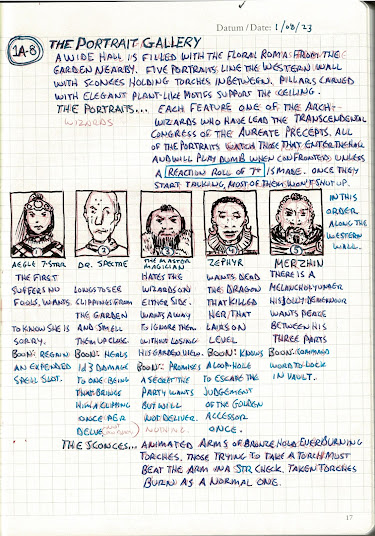 Speaking of Dungeon23 with a comics-vibe, I've been enjoying Tobias Redesäter's (@radesater@dice.camp) stuff on Mastodon. It's a megadungeon where you slip in through a crack in a bear cave and soon find yourself in a room where a blue goddess has been chained up! It's full of neat illustrations and little cool tidbits. 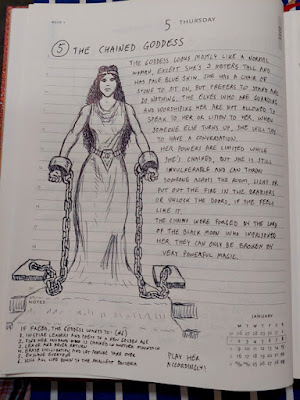 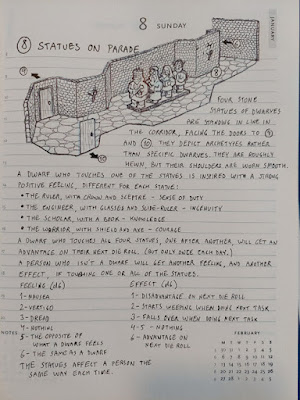 If you're on Mastodon definitely give him a follow and check it out. If you do, keep an eye out for the Nest Eagle. He seems like someone groovy to meet in a dungeon.

I know I've been highlighting Zedeck's Dungeon23 stuff a lot, but you really have to check this one out in particular. You can see it with an explanation here. If you get bitten by an eel in the previous dungeon, you get transported to the eel's dream here, a kind of dungeon perhaps built out of the traumatic memories of the eel. This one really hits home for me, because I once did a hexcrawl through an area that was contaminated by the "undermind" of the Parapraxis, a Phantamorian vessel that was spilling an NPC's unconscious into a valley. But, of course, it wasn't the mind of a freaking eel! 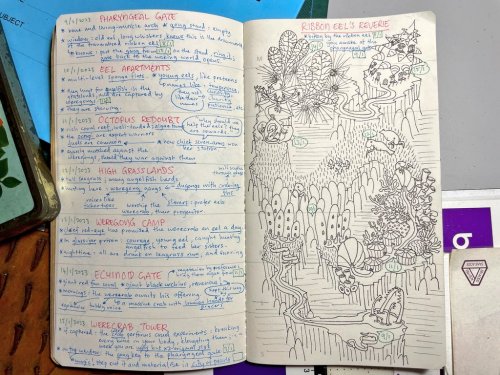 A brief roundup of other delightful things. OBVIOUSLY, OBVIOUSLY you need to be following Jonathan Newell's Apocalypse Archive posts, the second set of 6 rooms dropped here. If you want a more classic AD&D vibe location with a map that looks straight out of a TSR module, check out the debased Monastery of St. Amruss at Foot of the Mountain Games Adventure here.

You might wonder what's happening with the Catacombs of the North Wind, my Dungeon23 project. (The intro post is here, and the first 7 locations are here.) Because of the way I design locations I needed to do some research for inspiration, and also decide on some bigger picture questions, like what the different regions of level 1 of the dungeon will be. Slowly things have been taking shape in mind, but I'm not quite ready to start mapping and keying the next bit yet. I'll share some of the weird research I've slowly been doing for inspiration another time.