At the bottom of the undercity, the offal sinks and great sewer river spill into Zyan Below. Here a fecund and ever blooming white jungle grows like a pallid reflection of the gilded towers above glimpsed in the fetid waters of a still pond. It springs from the base of the floating island downwards, a dense riot of immense fungal blooms, and thick snaking vines covered in flowers that look like the jeweled wings of insects. The place is the surreal nightmare of a jungle. The breast of a bird will open to reveal pale, trembling petals, on which its blind young feed with snaking tongues. The line between insect, animal, and plant is not respected.  Often, it is hard to tell where one living thing stops and another begins.

Zyan Below can be divided into four levels. Each level is represented by a hex map, composed of hexes one half mile wide and high. These maps are stacked one on top of another. While I cannot reveal the maps (alas!) since they are all in play, I can tell you a little bit about the levels, which are these. 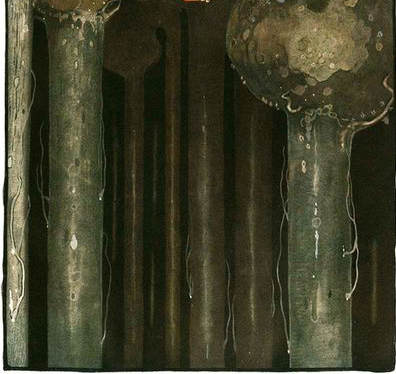 A deep loamy soil is caked to the uneven bottom of the rock of Zyan. At the base of the great tree systems, enormous root balls burst from this fertile ground. From this firm anchor spring down the immense trunks that disappear into a black chasm below. In this dark wooded free-falling expanse, storm clouds gather, pouring forth occasional showers of stinking offal rain that feed the jungle below. After the lightless chasm of cyclopean trunks, the trees branch out into interconnected brambly thickets. In these nighted tunnels, the air is hot and dank, reeking of pungent decay. Fungal blooms are everywhere, and strange rotting plants that have the look of offal. Here on may find, among other things, the Cenotaph of the Lady Shirishanu, and the tempting mossy road that leads to the lair of the Empty Witch. 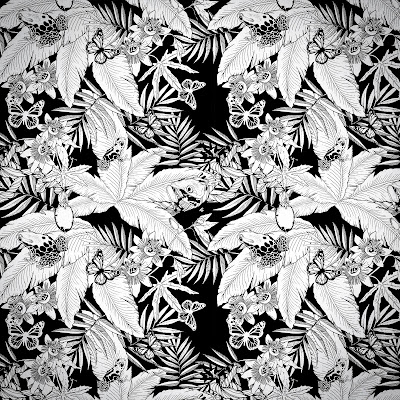 As one travels down from the brambles, a dim grey light dawns and fetid stink is replaced by a fragrance sweet and sharp. Here the white jungle blooms forth with the alabaster fronts of ferns, accented at bursts by jewel-like flowers, and clumps of unnatural fruit, oozing a milky sap. The sounds of life and death are everywhere, the buzz of insects competing with the staccato cries of strange birds, punctuated by the unsettling roar of alien beasts. Here life intertwined in lethal cycles that will devour unwary travelers. This is the living, beating heart of the jungle, in all its lurid glory. Here one may gaze upon the Emerald Pools, a massive waterway of pitcher plants that spill down to glistening ponds below, or brave ruined temples, now the roosts of lamia. It is here too that one may find the abode of the chittering masons, or the eerie valley of the flowers, where lies the wreckage of the Parapraxis, a fine vessel that once sailed the oneiric seas. 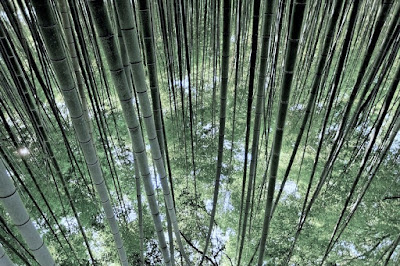 As one travels further down, the trees become thinner. Here, the air is bright, and a fresh breeze sways the leaves. Birds take wing, flitting amongst the luscious fruit and enchanting flowers. In this airy vertical forest, alien horrors slide up and down with frightening rapidity. The latticework is patchy, and broken, and travel here is difficult. Much of the fauna is floating or gliding, and it is here that the great lens plants can be found that channel the light of the Endless Azure Sea up to the Depths above. It is in these luminous groves that nobles built their pleasure grounds and swaying manses at the zenith of Zyan's power. Here one may find the legendary Summer Palace of the Incandescent Kings. 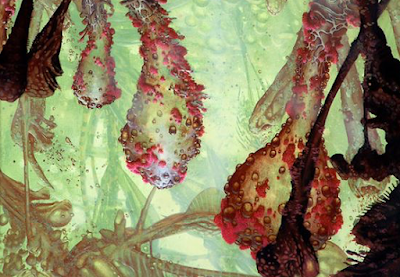 In a few places, the forest extends further still, penetrating the Endless Azure sea that surrounds Zyan on all sides. These dangling forest isles are buffeted by fierce winds and fogs of white downy cloud. Here, the strange aquatic life of the surrounding sea penetrates the jungle. Amongst blossoms of coral, flying fish move in the eddies of air, laying their eggs amongst thick swaying reeds. Potent artifacts washed up by the currents lie tangled in the groves here, which are stalked by strange beings born of the boreal winds that blow through the Azure Sea. The demons of the wind have their foothold here, including Bazekop the Prince of the West Wind, whose invisible towers can be approached across a slender crystal bridge.
Posted by Ben L. at 5:22 AM