The Nightmares Underneath: Review 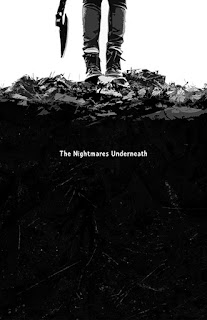 My interest was piqued when +B. Portly flashed an image of a mysterious gorgeous tome on G+. Given the fact that I've been running a campaign set in the dreamlands for more than a year now, when I heard that this book was an OSR supplement about the nightmare realm bleeding through into reality, I felt I had to take a look. Unlike many other names in the OSR whose work I know well, I'm not familiar with +Johnstone Metzger 's ouevre. I bought his module Evil Wizards in a Cave a ways back, and it did not make much of an impression on me. So I wasn't sure what I'd be getting. I was delighted to discover that this book is very, very good--good along an unusual number of dimensions.

The book is aesthetically attractive as a physical artifact. You can order it as a hardcover from Lulu with a dust jacket that makes it look like an antique gilded tome. (Buyers beware, Lulu dust jackets have a tendency to curl a bit.) Within the text is laid out in an effective manner with baroque embellishments that don't interfere with the presentation of the material. The generous illustrations are mainly collages of heavily altered public domain images, including paintings. Some are (probably) original pieces drawn by Metzger. The alterations fit the setting and feel of the book. It does a wonderful job as I hope these images convey. 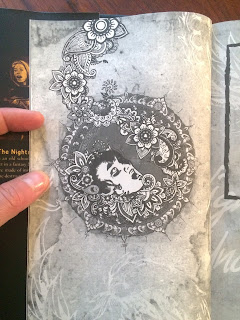 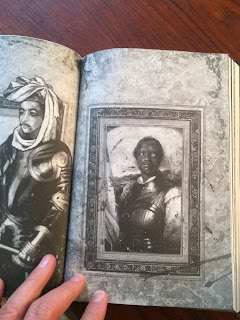 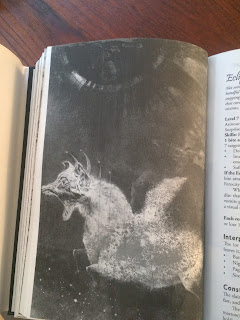 The setting of the book is distinctive and evocative. It is a world of high islamic civilization. The forces of law and reason have conquered the forces of chaos, including the idolatry of the pagans. It is less the wild world of the Arabian Nights, than the orderly civilization of the Abbasid Caliphate and the Ottoman Empire. Here the scholarly interpretation of the law and scripture reigns supreme, and there is great respect for art, science, and technology.

But beneath the bright sunlight of faith and reason, a dark inverted world grows. In cramped and claustrophobic spaces, incursions from the realm of nightmares spring. They are inhabited by horrors, that often draw in their wake strange and numinous creatures from the astral deep or the inhuman realms of faerie. They corrupt surrounding human settlements, feeding on their traumas, their obsessions, their sins, and their fears. 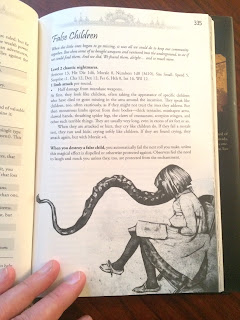 The players are the rare individuals who are drawn to these incursions, and who, for reasons unknown, are immune to their corrupting influence that destroys or bends ordinary people to its purposes. The party is a band of pariahs, perhaps murder hobos, self-seeking adventurers, who operate outside the normal social structures. Society tolerates them and makes space for them, not because it approves of them, but because they are its only defense against the darkness below. This is a pleasing and original take on a cluster of concepts from early D&D including the original opposition of law vs. chaos, as well as the assumption that the party will be a bunch of self-seeking treasure hunters operating outside of the bounds of ordinary social life.

These nightmare incursions tend to appear in wild and remote places, near enough to a human settlement to feed on its fears and desires, although they can also pop up in the middle of civilization. All possess an anchor, an object that is associated with great emotion, a human  heirloom, often quite valuable. The anchor is what ties the nightmare realm to the waking world--removing it causes the incursion to collapse. Each incursion is the seat of a Crown, a single type of nightmare embodying the theme of the incursion, a theme connected to its location and its anchor. The idea, which warms my heart, is that each incursion will be conceptually tight dungeon with mechanics, aesthetics, and foes suited to its theme.

For example, a nightmare incursion might exists in the ruins of a city decimated by the famine of a great siege. It has grown in the tunnels that the desperate residents clawed in their final attempts to escape the city. Among the few survivors, a corrupted cult has arisen, worshipping the nightmares that have extended the cramped tunnels into a strange inner space. In return for their sacrifices, the cultists are blessed with an insatiably hunger and the rich bounties of endless feasting. The mechanics of the dungeon would all be about desperate resource depletion, and the Crown would be some horror with a distended belly somehow representing the union of imagined gluttony and desperate hunger.

These incursions appear in inter-related clusters. The (level 1) incursions connect to the waking world, and most resemble it. But as one travels deeper in to further levels closer to the nightmare realm, one leaves the trappings of our reality further behind. For example, perhaps a great collector has gone missing. His heirs have noticed that several of his prize possessions are missing. In their search for these rare treasures they discover a strange and impossible tunnel in the back of one of his curiosity cabinets. They fear the worst. And they are right: the tunnel leads to a series of interconnected nightmare incursions, each representing the history of the relevant artifact, overlaid with the obsessive jealousy of the collector. The collector himself now resides in the deepest incursion as a host to the Crown of this level. His incursion is a glittering dungeon of intricate and impossible puzzle pieces arranged with the loving care of his possessions. It's strange traps and jeweled Escher spaces have attracted alien entities from the astral depths.

While I don't think it would be easy to crank out dungeons like this, the section on creating a nightmare incursion provides a lot of tools to help. Best of all, the bestiary contains a wonderful trove of Crowns that serve as excellent examples. The bestiary is really freaky and wonderful. The entities from the Astral Deeps and Fairie are just as good.

This book is not a campaign setting. It is an entire game, complete with its own rule set intended to support play in this setting. (In this, it resembles the incredibly tight OD&D variant rules recently put out by +Gus L tailored closely to his Apollyon campaign setting.) Sure, I can come up with rules for hexcrawling in a verticle jungle if I have to, but the truth is that I'm not a rules guy--at the end of the day it's hard for me to get very excited about rules. I use the AD&D lite rules (LL AEC) because they're comfortable, and don't require me to keep track of very many things. But I enjoyed Metzger's rules. My impression is that like his pictures, they are a collage of existing rules from a variety of sources, artfully manipulated and altered for his purposes. I can really only scratch the surface here for you. Let me end by telling you about some of the rules.

Stats are renamed versions of the list we all know and love, 3d6 in order. The classes are flavorful and, although corresponding mostly to AD&D classes, are quite different in their execution. Every class can cast spells drawn from a single list, although not necessarily very well. Each also has a few mechanically elegant abilities. Clerics are replaced by cultists. They do not have a separate spell list, although they can turn the hated foes of their cult, drawn from a small list of the entities found in the setting (including mankind!).

When it comes to combat, variable weapon damage is used, but it's determined by the hit die of your class instead of the type of weapon. This is an elegant solution to the aesthetic ickiness of weapon restrictions. Although fighters (along with thieves) are worse spellcasters than other classes, they automatically do damage in combat. If they hit they do damage twice. Combat also uses a version of +Logan Knight 's Grit and Flesh, to track the difference between temporary damage and real lasting wounds.

The skill system is elegant. If you are trained in something that would actually require training to do, and have the proper tools at hand, then you must roll the relevant attribute or lower on a d20. If you either are untrained or lack the proper tools, then you must roll equal to or under one half the relevant attribute. There is no official list of skills, although the classes all come with a general description of what they are skilled in. The player is also encouraged to come up with a background for her character on creation. She is trained in whatever it makes sense for her to be trained in. This avoids the cumbersome non-weapon proficiency lists (or, heaven forbid, the skill system of 3x.) and keeps things nice and loose. It also encourages players to think about who their character is a bit before play.

Now this skill system might seem to put a lot of weight on attribute scores, especially in a 3d6 in order system. But every time you go up a level you get a chance to raise two attribute scores, one of which must be one of the two prime attribute scores of your class. If you roll higher than the attribute it goes up one or two points depending on how low it is. As characters advance in level, they have a decent chance to bring any low stats up to a reasonable level, and a fair chance to get a prime attribute up to a reasonably high level. I find the interaction of the skill system with the attribute increases a nice synergy. I haven't tried it, but I bet it would work pretty well in play.

Probably my favorite rules innovation in this game is a nice early domain game of institution building. As PC's begin spending money in town, they build up the institutions where their coin flows, whether it's a tea house, druggist, university, court, or a necromancer's guild. As the institution grows in stature, the player acquire contacts and gains more favorable interactions with them. There's also a chance that the institution eventually acquires the alignment of the character who funds it. I think this would be a lot of fun, and lead organically to intrigue and engagement with a richly developed setting outside the dungeon. There are also some fun rules for inflation and building resentment to the players.

In short, you should buy this book. It's beautiful. The setting is evocative. The core conceit of the dungeon as nightmare incursion is fun. The bestiary is nuts. And the rules are interesting.

You can find links here to a free version of the PDF (no art), or to buy the full version of the PDF, as well print copies in hard and softcover. Metzger has also released a free (PWYW) pdf of a sample module which can also be purchased in print. You can get find links to both here.

Labels: Reviews, The Nightmares Underneath