Skeleton of a Monstrous Reptile 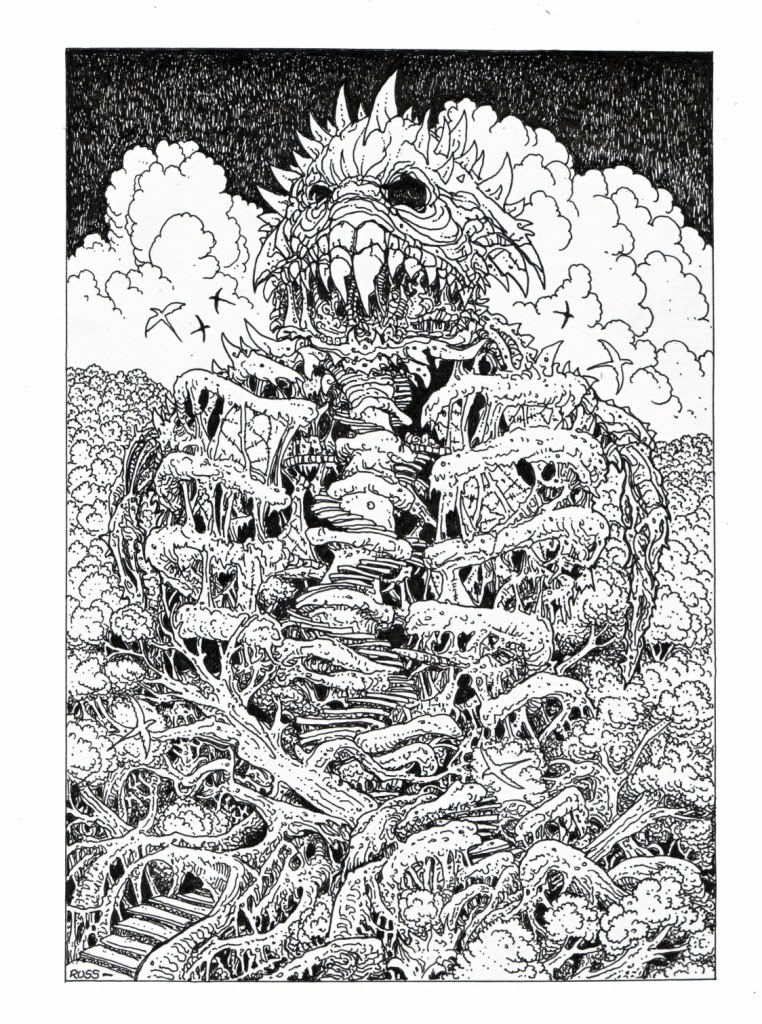 From the steaming, fetid waters, and wild green growth where the Swamp of Many Eyes meets the Screaming Hyena Jungle, rises the skeleton of a monstrous reptile. The whole affair is a sight to behold. The giant spine of some long extinct, sinuous creature rests where it fell in its death-throes. Beginning at ground level, the spine is supported in midair on the remains of several massive trees that long ago broke the creatures fall. The spine twists upwards, encased by the creature's ribcage, terminating at the top in a giant fanged skull. The swamp has reacted with the characteristic stoicism of vegetable life to this alien intrusion. Thick moss now stains the once white bones, vines cling to every vertebra, and trees have grown through and around its ivory columns. The work of sentience is evident as well, for rickety wooden steps have been affixed to the spine, and travel upwards between the massive curved ribs, winding their way up towards the fanged skull. At various points wooden platforms have been assembled. In these places the bones have been festooned with tattered silk, bells, and animal hides. High up, within the skull, velvet drapes can be glimpsed, and the gleam of fine wooden furniture. This skeleton is the lair of an ogre mage, the Yellow Enchanter, and his three dimwitted apprentices, Ordo, Cadiro and Hax. 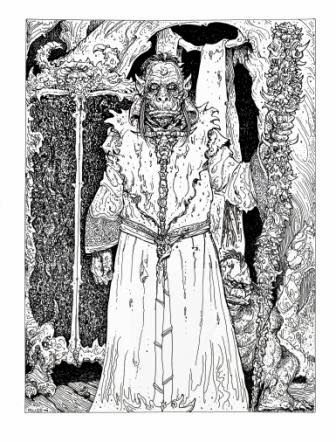 The Yellow Enchanter is a strange and melancholy figure. On his massive frame an opulent damask robe of a fine ochre hue always hangs. He is dignified, if masterful, and although slow to anger, shows no mercy when irked. The Yellow Enchanter's great ambition is to find the lost City of the Archivists and, having passed under its equation-inscribed gates, to master its strange secrets. In this endeavor he wishes most for the help of a talented apprentice. If he comes across a magic user, he will test his mettle. Should the candidate fare well, he will make a proposition that it is best not to refuse. (Needless to say, his apprentices will not look kindly on this turn of events.)

The Yellow Enchanter carries with him at all times the staff called the Sibilant Council. Every inch of this 12' tall mahogany staff is covered with grotesque faces. Once per day these faces may pronounce a hissing prophecy, equivalent to an Augury spell. They can also detect lies once per day, pronouncing their verdict along with venomous epithets. Unfortunately, the Sibilant Council has prophesied that the Yellow Enchanter will fail in his endeavor, and, unable to master the secrets of the Archivists, that he is fated to be consumed in their city by black flames of unspeakable heat but no light. The Yellow Enchanter nevertheless persists, since he knows that the staff hates him and tells him many lies.

The Yellow Enchanter HD 6+4 (34) AC5 Mv15 (fly 18) Attk: staff (1d12+6) or by spell. He has the following powers at will: fly, invisibility, darkness. He may cast the following spells once per day as a 9th level wizard: knock, sleep, burning hands, detect magic, detect invisibility, web, wizard lock, dispel magic, phantasmal force, hold person, polymorph self, polymorph other, minor globe of invulnerability, and cone of cold.

The Yellow Enchanter's three apprentices Ordo, Cadiro, and Hax, are decked out in obviously plundered threadbare finery, including furred hats, capes, and tight silk pants. Although they have pretensions to greatness, like most ogres, they are dense, cruel, and spiteful. They know only the most rudimentary magic. Ordo HD 4 +1 (14) MV15 Huge Club 1d6+6. He knows only feather fall. Cadiro HD 4 +1 (15) MV15 Giant Sharpened Bone 1d6+6. He knows only jump. Hax HD 4 +1 (21) MV15 Enormous Axe 1d10+6. He knows only unseen servant.

If the PC’s stumble upon the skeleton during the daytime, roll (d6) to see who is present:

1. The Yellow Enchanter
2. The Apprentices
3. Everyone
4-6. No one. For every two turns spent exploring the skeleton there is a 1 in 10 cumulative chance that someone will return. 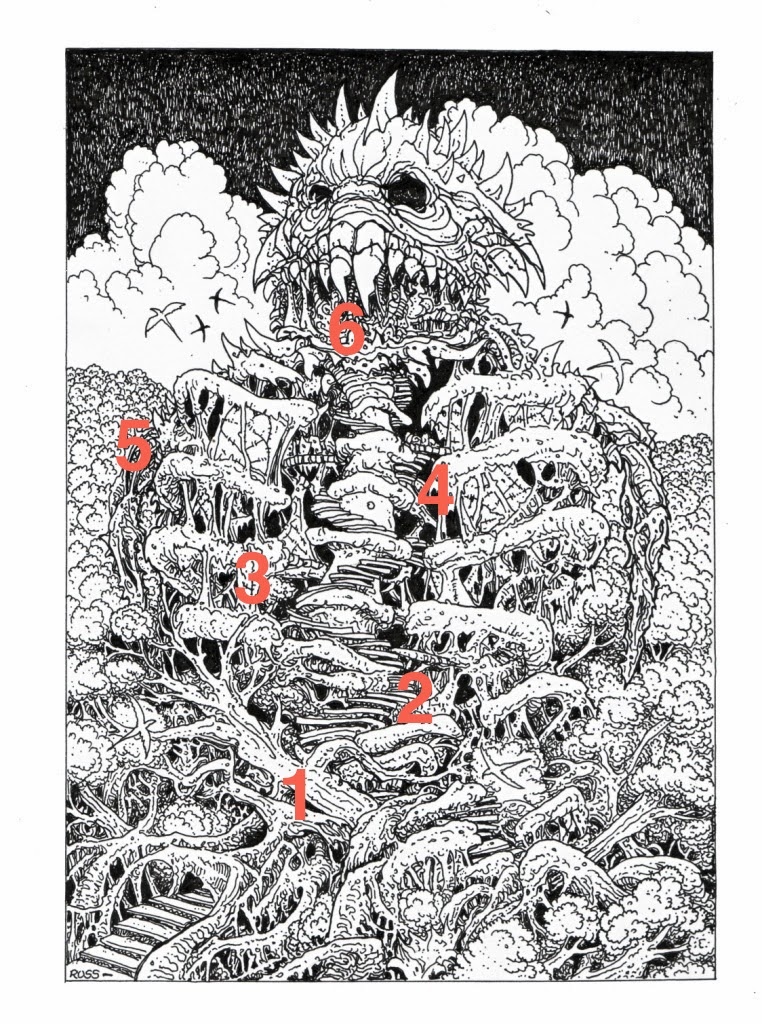 1. Lair of the Three Apprentices

This platform is covered by a tarp composed of rotting silk. Beneath this covering, suspended from the ribs, are an odd assemblage of gew-gaws: the rotting head of a massive bear, a weather beaten metal helm, a string of brightly painted beads, a feathered cloak, the prow of a small ship complete with a wooden maiden. Three piles of mangy furs serve as the bedding for the apprentices. A flat iron chest serves to store their “treasures”. It is unlocked, but a massive 150 lb rock sits on top of it. The chest contains a large piece of quartz (10 lbs; 15 gp value), many pieces of gaudy but worthless costume jewelry, a pouch with diverse coins (72 cp, 23 sp, 14 gp), a delicate bronze medallion inlaid with a sun in lapis lazuli (100 gp), and a finely crafted rapier with a ram's head handle (75 gp).

This platform houses a fire pit. Strung up from the ribs are many cooking implements: a large metal cauldron, several knives including a butcher knife so massive that an ordinary human cannot lift it. Strips of meat hang everywhere and freshly picked mushrooms are spread on a linen sheet. Large barrels contain various nauseating substances—sheep's heads, eels, rancid fleshy fruit, etc.—that are pickling in brine.

The floor is strewn with mildewed pillows that look as though they were once fine. A brazier on a tripod sits to one side of the platform. The center of the platform is taken up by a massive brass contraption, from which extend several long pipes. Along the side opposite the brazier is what looks to be a coffin (human), now housing 10 large bundles of strong smelling tobacco. Underneath the tobacco is a queerly crafted, long, silver smoking pipe that can be disassembled into parts. It is engraved with swirling smoke (200gp).

This platform is empty. From it stairs wind upwards to their final destination at the skull. The area in front of the steps going up is trapped. As soon as someone steps within it, the vines that wind around the bones will spring to life, and attempt to bind those within. If successful, they will hold the intruders until the Yellow Enchanter returns. They will not pursue intruders far from the platform. Vines (x30) HD1 AC7 Grab On a successful to hit roll, the vines will begin to bind their target who suffers a cumulative -2 penalty. At -6 he is trussed like a turkey and cannot move unless he receives external aid.

This massive tree is home to 8 Manta Bats  Although they fear the ogre's owing to their massive size, they will attack any normal sized individuals imprisoned in area 4, or anyone who passes by the tree on the steps from area 4 to area 6. It is possible to approach area 6 from the ground directly by scaling this tree, which, after the first 15 feet is not difficult to climb. But anyone climbing the tree will be vulnerable and subject to attack by the Manta Bats that roost in the upper branches. Manta Bats HD2 AC7 Bite 1d6 MV18.

6.   Lair of the Yellow Enchanter

This platform is lodged between the massive jawbones of the skeleton. From the top jaw, vicious fangs curl down. The upper jawbone provides a natural roof. This platform is more seriously furnished than the others. A massive bed with a polished brass frame, and a black velvet canopy, occupies one corner. A fine, if heavily weathered, massive black lacquered armoire sits to one side, its front decorated with a forest scene in gold leaf. Inside a large mirror hangs (30 lbs, 50gp), as well a number of massive silk robes. Next to it stands a set of drawers containing odd spell components and magical accoutrements, including a small eye preserved in a hunk of hardened amber (20gp), and a ball of smoky quartz in which red lights flicker (100gp). Rolls of parchment, along with a brush for painting, hang from several wooden posts that have been driven into the platform. Two are blank, one is underway, and three stand finished (they are scrolls: protection from good, sleep, and minor globe of invulnerability). Underneath the bed, an ordinary sized chest contains three potions: pink, swirling effervescent substance (1x gaseous form), three gray tablets in an intricately carved wooden box (3x clairvoyance), luminous white liquid in a vial (2x giant control), and a carved amulet in the shape of a bull's head. This is the Amulet of the White Labyrinth. Once per day it will transport one victim (save vs. spell) to a marble labyrinth for 1 hour, where he will be stalked by three white minotaurs. The lid of the chest is marked by criss-crossing deep cuts as though it was hacked with an axe or sword. In reality these lacerations are runes that will flow from the chest onto the skin of someone touching the chest without the password ("False Prophecy") doing 4d6 damage. The chest also has a 9th level wizard lock on it.
Posted by Ben L. at 8:04 AM