Prison of the Hated Pretender [Review] 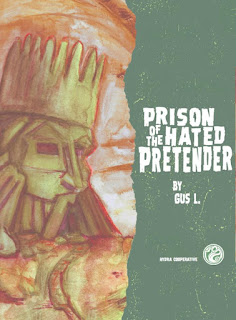 Prison of the Hated Pretender is a module published by Hydra Cooperate and written by Gus L. It is available here on DriveThruRPG for the low price of PWYW. It is designed as a first level starter adventure, intended to introduce new players and DMs to exploration based play. Obviously this review contains spoilers, so if you might play in the Prison of the Hated Pretender, you should probably stop now. Also full disclosure: I collaborate with Gus on Through Ultan's Door. (Although if you want to know why, this review explains it.)

Although it does present a starter homebase (a miserable little village called "Broken Huts"), the bulk of the module is taken up with the titular prison. The dungeon is designed to showcase and teach exploration-based play. Gus has an imagination for locations that I sorely envy as a DM and author. With him nothing is boring straight corridors and square rooms, or featureless caverns. In this case the prison is a ten room, four floor (including basement and roof) affair carved out of rock to look like the crowned head of the hated pretender. 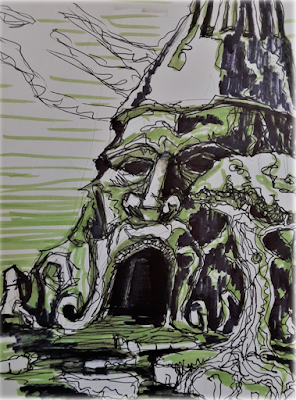 As they approach the dungeon, right away the players are presented with a meaningful choice, for they can simply walk in the front door, or they can climb a tree up to the eyehole windows on the second floor, or even scramble over the top of the head to a roof that is surrounded by the stone crowned pate of the head. The natural entrance to start with on the ground floor immediately introduces danger and adventure, since the first thing the PCs see is a sigil holding back strange entities within.

The two opposed factions of the dungeon are interesting and evocative. No skeletons or orcs here! First, the Phantasms of Vengeance, celestial monstrosities that are drawn from the Celestial Thrones to our reality by the sanctified bones (and twice sacrificed souls) of the righteous victims of the Hated Pretender. The Phantasms take diverse otherworldly forms like animate stained glass, tangles of silver wings, or orbs of celestial light. While not very powerful individually, there are many of them, and they reform later if slain. Second, there is the hated pretender, a pitiful if dangerous revenant. Scatterbrained wreck of his former tyrannical self, his desires are pitifully simple: treasure, mortal food, and escape from the torment of the Phantasms of Vengeance. He too is recreated each night if slain. 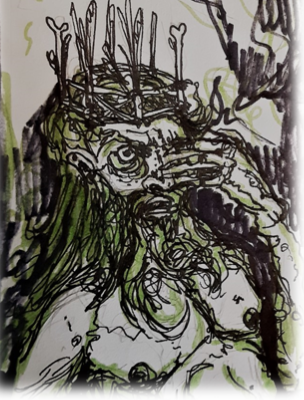 One feature of exploration based play the dungeon is designed to highlight is that combat is not its own reward, but something to be avoided where possible, and risked where worthwhile. Fighting through the Phantasms is a deadly fool's errand. While the Phantasms cannot be reasoned with, the Pretender can be spoken with and has interests and desires that allow for negotiation and a source of information about the environment. (The way he's described and drawn I think it would be easy to DM him, and the interactions would be memorable.) In neither case does effective resolution come mainly through combat.

The whole dungeon is constructed like a puzzle, the solution to which hinges on piecing together the relation of the two different factions to one another and the prison. The key is the day/night cycle, since the Phantasms of Vengeance can only go where there is light, and as a result, the Hated Pretender sticks to darkness. There are campaign altering possibilities here, since the PCs can put the Pretender and Phantasms to rest if they figure out what's going on, or inadvertently free them if they blunder, with large effects on the setting. They can also an artifact to receive prophetic visions of the future with large ramifications, and there is rich (if hard to access) treasure in the dungeon too.

I am hard pressed to think of a better, more immediately evocative and interesting introduction to exploration based retro-game play. The dungeon is a perfectly constructed little jewel-box of retro-game play. In fact, it's a kind of master class in how to design a dungeon in a way that builds the relation of factions and mysteries to be unravelled in at the ground floor. What's miraculous is that Gus does all this...with a ten room dungeon.

The idea of the module as a kind of "class" is thematized by the inclusion of side bars that explain in plain terms what style of play is presupposed in the design of the dungeons. Gus the teach' explains why the factions are not "good guys" and "bad guys", why there is no presupposed way the PCs are expected to interact with the environment, and why combat is not a preordained outcome. There is also a conversion to 5E at the end, along with a couple more notes from the teach' on how to run this style of adventure in 5E. It's clearly intended as a bridge to retro-game play, offered in a friendly spirit to 5E. I don't know if it will find its way into their digital hands, but I hope it does. 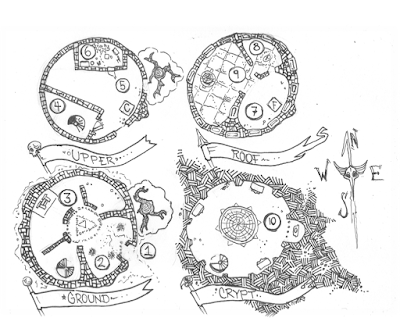 The cartography of the module is good, aesthetically pleasing but simple with most of the major features drawn clearly on the map. (Gus' cartography is always good.) The module also has handy extra maps, including one version that is blank (for screensharing) and one with a helpful cheat sheet on it. Gus has also developed a special notation that is meant to help synthesize information at the table, with light sources and traps mentioned up top, notable features bolded in the room's description, treasures italicized, and threats underlined. It's a system of information that I find is helpful at the table, except for large informationally dense rooms where my eyes cross, and I can't parse the different fonts and keep track of their meaning.

In short, this a perfect low-level module to kick off a new campaign, or introduce players to retro-game play. Even us old hands can learn a thing or two about dungeon design from it. Oh yeah, and while you're on his DTRPG page, be sure to pick up his one page dungeon Star Spire too. It's a real pretty 1 page dungeon usable with any older edition of D&D or their retro-clones. It's a groovy little number that would fit right into a UVG campaign, for example. 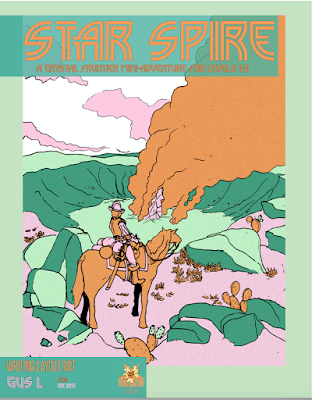